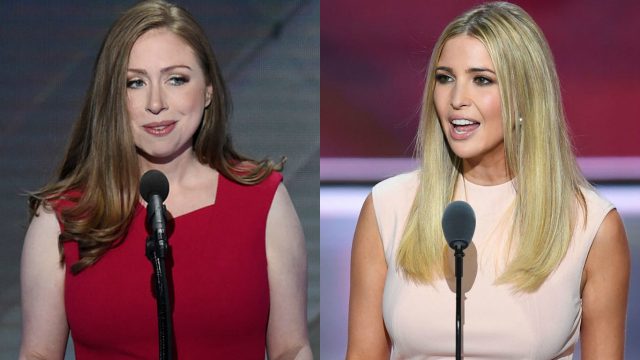 During a rally in Denver, Colo., over the weekend, the Republican nominee weighed in on his daughter’s friendship with Clinton.

“I thought Chelsea did a nice job,” Trump said when asked about her speech at the Democratic National Convention. “You know, Chelsea likes Ivanka and Ivanka likes Chelsea.

“I wish they didn’t like each other, but they do.” (RELATED: Chelsea Clinton Just Addressed The Democratic National Convention — What She Said)

The two women have been friends for years, and both recently spoke at their parent’s respective conventions.

While addressing the Republican National Convention in Cleveland, Ohio, Trump’s daughter said her father can bring real change to the country.

“I do not consider myself categorically Republican or Democrat,” Ivanka said.

“I vote for what I believe is right for my family and my country. As the proud daughter of the nominee, I am here to tell you this is the moment — and Donald Trump is the person — to make America great again.”

“Every day that I spend as Charlotte and Aidan’s mother, I think about my own mother,” Chelsea said.

“My wonderful, thoughtful, hilarious mother. My earliest memory is my mom picking me up after I had fallen down, giving me a big hug, and reading me ‘Goodnight Moon.’ Every single memory I have of my mom is that, regardless of what was happening in her life, she was always there for me. Every softball game, dance recitals, countless saturdays finding shapes in the clouds.”