If Hillary Clinton’s 20 biggest political donors this election cycle pooled all of their wealth together, they could cover the taxpayer-funded portion of Planned Parenthood’s budget for the next 120 years, a Daily Caller analysis finds.

That same small group of donors, who are worth $64.5 billion together, could cover Planned Parenthood’s entire $1.3 billion annual budget — which depends on revenue from grants, service fees, and private donations — for the next half century.

But don’t look for the billionaire Clinton supporters to start covering the $550 million in taxpayer dollars given to Planned Parenthood each year anytime soon. Democrats — who are the main recipients of Planned Parenthood campaign contributions — have resisted Republican proposals to ban federal funds from going to the group, which performed 323,999 abortions in its most recent fiscal year (nearly half of all abortions performed last year).

Clinton and her fellow Democrats have praised the organization for providing abortions and other services, including STD tests, pregnancy tests, and breast exams. But they argue that federal funds that go to Planned Parenthood — which make up 40 percent of its revenue — are not used to subsidize abortions.

Conservatives reject that claim, saying that all of the money Planned Parenthood raises goes to support all of the services it provides. They oppose using federal funds to subsidize the nation’s largest abortion provider with many arguing that the organization should fund itself entirely on service revenue or private donations.

It’s clear that if wealthy Clinton donors wanted to support their candidate’s position and end the standoff, they could. The table below shows the net worths of the biggest donors to Priorities USA, a super PAC supporting Clinton. The number of years of funding that the billionaires could provide to Planned Parenthood is calculated based on revenue figures from its most recent annual report. 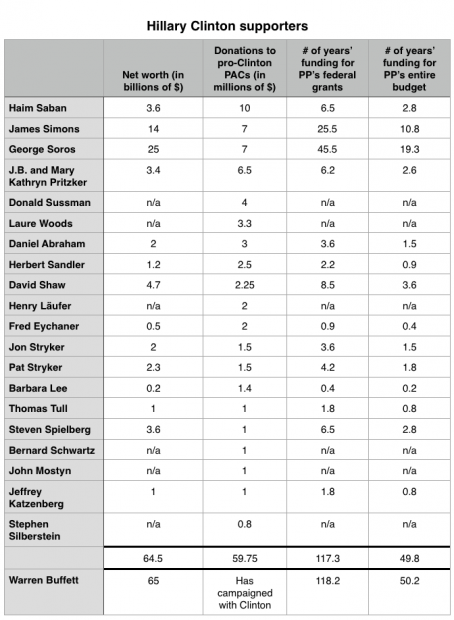 Campaign donation data via Federal Election Commission and the Center for Responsive Politics. Net worth data taken from various sources.

Warren Buffett is a mega-billionaire Clinton supporter who also supports Planned Parenthood. He has not contributed as heavily to pro-Clinton groups as other donors have, but he did recently appear at a campaign event in Omaha with the presidential candidate. He also gave $25,000 to Clinton’s PAC in 2014.

The 85-year-old investment guru gave $63.5 million to Planned Parenthood in 2014 through his family’s foundation.

With a net worth of approximately $65 billion, Buffett could fund Planned Parenthood for as long as all of the other Clinton donors combined. With all of their fortunes were pooled together, the group of 21 Clinton supporters could fill in the federal portion of Planned Parenthood’s budget through 2251. They could fund the organization completely through 2116.

Clinton’s biggest campaign donors have given $59 million to Priorities USA. Some donors on the list, such as billionaire financier and philanthropist George Soros, have also given to American Bridge and Correct the Record, two groups founded by Clinton ally David Brock.

With his $25 billion net worth, Soros could fill in the federal portion of Planned Parenthood’s revenue for 46 years on his own. He could support the entire organization for 19 years with that nest egg.

James Simons, the founder of Renaissance Technologies, a hedge fund, could replace Planned Parenthood’s federal portion for the next quarter century with his $14 billion fortune. He could single-handedly fund the group for 11 years.

Not all of Clinton’s biggest donors have made supporting Planned Parenthood a priority. Many on the elite list appear to not have taken a public position on the issue. But several have, including Soros, Simons, venture capitalist J.B. Pritzker, billionaire heir Jon Stryker, and Houston-based attorney John Mostyn.

And in 2014 he gave $500,000 to Planned Parenthood Votes, a super PAC that supports pro-abortion candidates. Earlier this year, his son, Jonathon, contributed $1 million to that committee.

Stryker, an architect who is heir to the Stryker Corporation fortune, gave $100,000 to Planned Parenthood Votes.