Former Marine Jason Lutcavage was banned from Facebook in July for a period of 30 days for arguing that while he supports the inclusion of transgenders in the military, the Pentagon should not have to pay for transition surgery or hormone therapy.

Lutcavage made the post on behalf of a Marine-run Facebook page called “Just the Tip, of the Spear,” (JTTOTS) which at the time was in its 26th iteration because of its reputation for humor that sometimes crosses the line. JTTOTS has been subject of several investigations and bans as a result of posts deemed offensive, often toward female servicemembers. After the post, Facebook not only banned JTTOTS permanently, but also gave the post author, Lutcavage, a 30-day ban.

“We objectively do not care if you are gay or trans…That said, we should not be paying for hormone replacement therapy (HRT) nor surgeries,” Lutcavage wrote in the original Facebook post. “It sets a dangerous precedent for people to simply join to have their transition paid for. Furthermore, surgeries require recovery, therefore adversely impact mission readiness.”

Lutcavage also argued that if there are no more barriers to entry into the military, the outdated tattoo policy should be eliminated, as well.

“You have sleeved out, multiple deployment Marines, combat vets and officers who would totally come back to share their experiences and training with the younger generation — in a heartbeat. We’re going to foot the bill for sex changes, HRT, meetings inspired by social justice warriors espousing “sensitivity” and yet we draw the line at tattoos? Really?”

That post was apparently enough to get Lutcavage kicked off the social media platform—at least for 30 days.

“This is a pretty common occurrence with us, as I imagine it is with other military and conservative sites in general,” Lutcavage told The Daily Caller News Foundation in an interview.

“They seem to get shut down quite often for expressing opinions outside of the norm, or anything that isn’t what you would call politically correct, so to speak,” he added.

Lutcavage noted that even though he essentially supported LGBT inclusion in his post, he was still banned, anyway.

“We seem to be pretty ecumenical and balanced about things,” Lutcavage said. “Sure we have our dark humor, but that’s just native to the military in general and combat arms in general, so it’s kind of unfortunate to see pages advocating killing Americans or hardcore Third Wave feminism pages advocating the killing of all men being allowed to stay up, but military pages are being removed left and right. That’s definitely a little hypocritical, and I honestly think it’s people abusing the report function.”

Language Warning: Read the full post below, but be warned, it’s delivered in coarse language not unlike what can be heard on a Marine smoke deck. 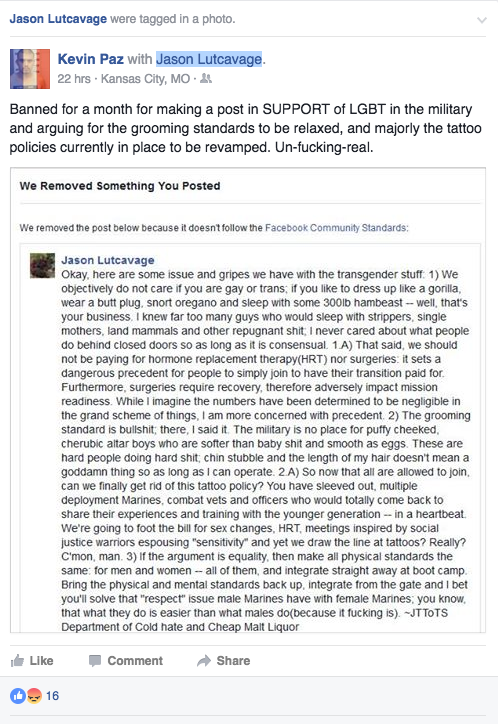