A tiny faction of old, radical communist revolutionaries is helping to lead and organize the violence which has engulfed Milwaukee in the wake of the police shooting death of a black man who, police say, raised a semiautomatic handgun at pursuing officers.

The fringe-left group is the Chicago chapter of the Revolutionary Communist Party — a Maoist outfit which advocates violent insurgency. Its membership is mostly white.

The radical communists “showed up, and actually they’re the ones who started to cause problems,” Flynn said at a Monday press conference.

In the image below, the man below the red arrow is wearing a shirt advertising the Revolutionary Communist Party’s message. (The letters BA stand for the group’s founder and cult-like leader, Bob Avakian.) 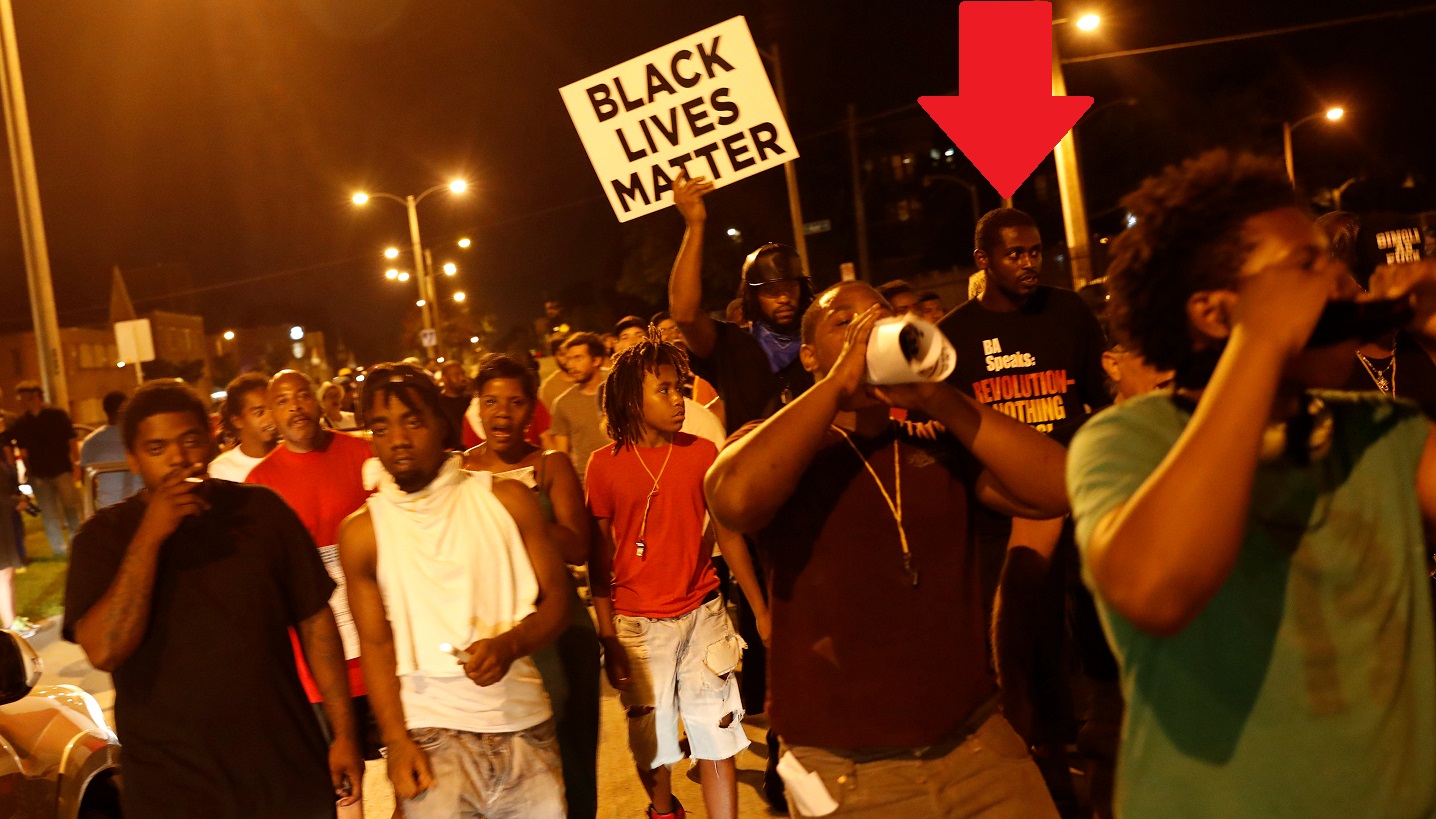 “The killer cops always get off. People are sick of that,” Dix also said.

The Revolutionary Communist Party’s trip to Milwaukee in the wake of this weekend’s shooting is far from its first attempt to agitate. In fact, the fringe group regularly seeks to conceal itself in growing radical movements involving protests against police.

In November, for example, the Revolutionary Communist Party was a primary organizer behind a series of protests in Chicago over the brutal police shooting of 17-year-old Laquan McDonald.

The obscure clutch of communists worked in unison to carry a bullhorn connected loud-speaker as well as a carefully crafted sign from an October protest in New York City.

Members of the Revolutionary Communist Party energetically distributed flyers communicating their plan to co-opt the protest movement in Chicago.

The Daily Caller obtained one of the flyers. It describes the work of America’s police officers as “a campaign of terror with genocidal implications.”

“This is a situation where the burning anger and righteous refusal of the people to take this shit any more has erupted repeatedly into resistance since the uprising in Ferguson over Mike Brown’s murder,” the handout explains.

“We need an end to the whole system of capitalism-imperialism,” it urges. “This requires an actual revolution. This revolution is real and possible.”

On the front page of the Revolutionary Communist Party’s website, the party is currently selling a book by founder Bob Avakian, entitled “The New Communism.” The book purports to offer “the science, the strategy, the leadership for an actual revolution, and a radically new society on the road to real emancipation.”

Avakian, who enjoyed a comfortable middle-class boyhood, became radicalized in the 1960s during his time in Berkeley. He was part of the Students for a Democratic Society with Bill Ayers and, later, became aligned with the Black Panthers.

He founded the Revolutionary Communist Party in 1975.

The Revolutionary Communist Party runs a handful of radical bookstore franchises around the country called Revolution Books. The one in Chicago is on Ashland Ave., is next to a paint store and across the street from an upscale vendor of eyeglasses.

Avakian — “Chairman Bob” — is now a very old, fringe oddball in bizarrely self-imposed exile. Only his closest acolytes know where.

It’s not clear why Avakian feels compelled to live in exile because virtually no one cares about him or his radical Communist program.

In Chicago, in November, the main communist agitator who shouted a continuous barrage of chants through the Revolutionary Communist Party’s bullhorn was longtime Chicago activist Grant Newburger.

Newburger, who is nearly 69, called himself a leader of the Revolutionary Communist Youth Brigade as a fortysomething radical, according to the Chicago Reader.

The gray-haired, pasty-white Newburger shouted constantly into his bullhorn during the protest, repeatedly referred to the predominately black protesters as “y’all.”

Another communist agitator who spoke into the communal Maoist bullhorn during the Chicago protests was Revolutionary Communist Party member Lou Downey.

In September 2015, Downey raised $1,652 using a Gofundme account for his exploits in Ferguson, Missouri.

In the summer of 2014, members of the Revolutionary Communist Party were fixtures in Ferguson, stirring up the protests which led eventually to a night of mayhem after a grand jury decided not to convict police officer Darren Wilson for shooting and killing 18-year-old Michael Brown. (RELATED: Total Police Failure Brings Absolute Mayhem To Ferguson After Grand Jury Announcement)

“We are revolutionaries,” Downey, the well-traveled white communist agitator, told The Kansas City Star in August 2014. “We’re working to do this in a way that puts an end to the system that for generations has criminalized youth, especially black youth.”

Smith, 23, fled on foot from a car during an afternoon traffic stop on Milwaukee’s North Side. During the ensuing chase, police say, Smith raised a semiautomatic handgun.

The officer who fatally shot Smith is black.

The weekend riots caused considerable damage. At least half a dozen retail businesses went up in flames. Several police officers were hurt by objects hurled by rioters.