The San Diego Chargers have announced first round pick Joey Bosa has agreed to a contract with the team.

The news was announced by the Chargers Monday afternoon. “We look forward to having Joey join us and getting him prepared as quickly as possible for the 2016 season,” General Manager Tom Telesco said in the statement. 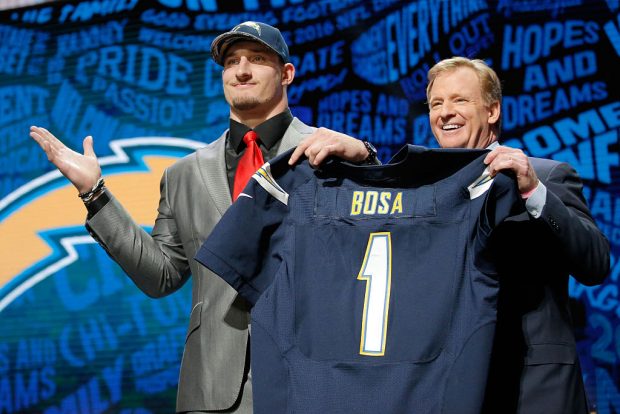 CHICAGO, IL – APRIL 28: (L-R) Joey Bosa of Ohio State holds up a jersey with NFL Commissioner Roger Goodell after being picked #3 overall by the San Diego Chargers during the first round of the 2016 NFL Draft at the Auditorium Theatre of Roosevelt University on April 28, 2016 in Chicago, Illinois. (Photo by Jon Durr/Getty Images)

The two sides had been in an extremely tense holdout, and it initially appeared that Bosa would never sign with the Chargers. If the former Ohio State star had made that decision he could have sat out the year and reentered the 2017 NFL draft. (RELATED: San Diego Chargers Pull Offer From Highly-Touted NFL Draft Pick [VIDEO])

It shouldn’t be long before Bosa rises to the top of the Chargers depth chart at defensive end.