UPDATE: Due to continued complaints about the subject matter, these Hillary’s Lies Matter shirts will only be available until the end of the day. Then they will disappear forever. You can get yours here.

Last week, we published an article on how the left-wing media behemoth still has a monopoly on the information that gets into people’s homes. The New York Times, the Washington Post, NBC, ABC, CNN, etc. have the most money and the most viewers. They can control what news people see and when they see it. Hardworking journalists committed to covering the facts simply don’t have those kind of resources, and their stories are often lost in the abyss. Alternative media is trying to raise funds to fight back, which is why we are offering limited edition Hillary’s Lies Matter T-shirts.

It shouldn’t have been a surprise, then, that the liberal elites hijacked the fundraiser in an attempt to keep the shirts from the general public. The link to the Hillary’s Lies Matter shirt stopped working. It was clear they wanted to block your right to free expression and free speech. And they didn’t want people to know about Hillary’s long history of falsehoods and untruths.

The Daily Caller fought for your rights, and the shirts are available once again. We want people to stand up for truth and good reporting. Consider getting a shirt to support alternative media – the outlets that care about what is actually going on in reality. You know, simple facts like the statement that Hillary’s lies matter. 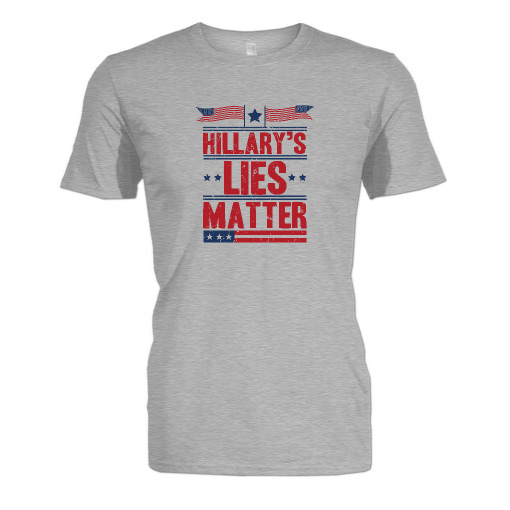 These shirts will only be available for a limited time. Once their gone, they won’t be available ever again. So get yours now. Stand up to the left-wing power structure in this country. There are people in this country that want to crush your constitutional rights. And others who are happy to see them slowly erode away. It’s up to you to fight back.