Retired Gen. Colin Powell warned Hillary Clinton just days into her tenure as secretary of state to be “very careful” about using a private BlackBerry and email account to conduct State Department business because of federal records laws.

The FBI laid out the details on Friday in a 47-page report it released on its investigation into Clinton’s email server.

On Jan. 23, 2009, Clinton contacted Powell, who served as secretary of state in the George W. Bush administration, inquiring about his use of a BlackBerry.

According to the FBI, Powell “warned Clinton that if it became ‘public’ that Clinton had a BlackBerry, and she used it to ‘do business,’ her emails could become ‘official record[s] and subject to the law.'”

“Be very careful,” Powell advised Clinton. “I got around it all by not saying much and not using systems that captured the data.”

According to the FBI’s report, Clinton said she understood Powell’s statements to mean that any of her work-related emails would be government records.

Despite knowing that — or in light of learning it — Clinton continued to use a private BlackBerry and personal email count during her entire stint as secretary of state. Several Freedom of Information Act requests filed for her emails during her tenure were improperly denied by the State Department because the records department was unable to locate any of her emails.

Clinton said that Powell’s statements to her did not influence her decision to use a personal email account. 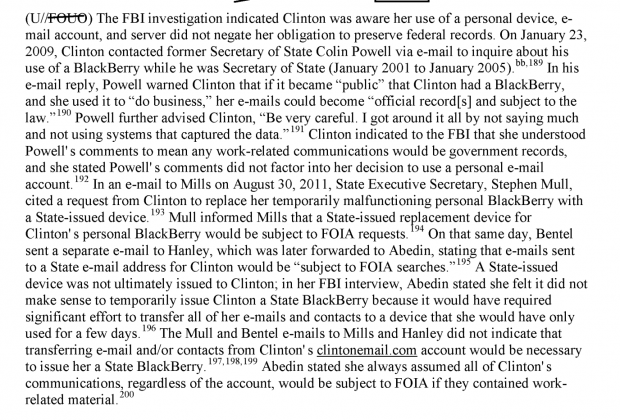 Powell’s exchange with Clinton was first reported last month, but not in great detail.

It was also reported that Clinton mentioned a 2009 dinner party at which she claimed Powell advised her about using a personal email account. Powell used an AOL account during his tenure from 2001 to 2005. Unlike Clinton, he did not use a private email server. He also has not run for president.

The FBI’s report contains no reference to the dinner party exchange.