People are furious that Hillary Clinton’s campaign brazenly lied about her health. 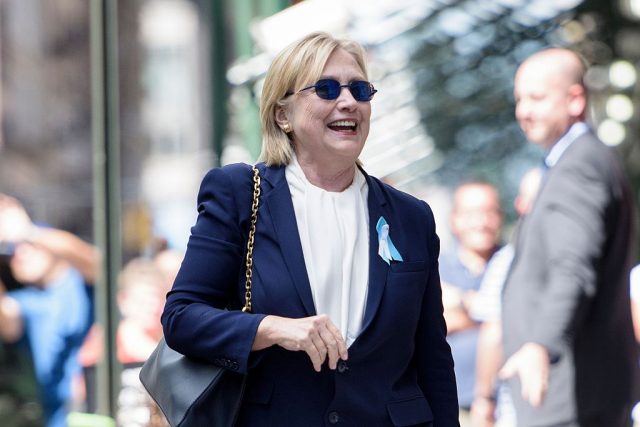 After the Democratic nominee was seen shakily leaving a 9-11 commemoration ceremony early on Sunday, her campaign said she had gotten “overheated” — even though the temperature in New York was in the 70s.

Ninety minutes later, she exited Chelsea Clinton’s apartment and told the press she was “feeling great.”

“Secretary Clinton has been experiencing a cough related to allergies,” Dr. Lisa Bardack said in a statement. “On Friday, during follow up evaluation of her prolonged cough, she was diagnosed with pneumonia.”

“She was put on antibiotics, and advised to rest and modify her schedule. While at this morning’s event, she became overheated and dehydrated. I have just examined her and she is now re-hydrated and recovering nicely.”

@therealcornett @HillaryClinton why can't the Clinton campaign be honest with American public and tell us the truth?

Why should we believe @HillaryClinton has pneumonia? First it was nothing, then propaganda, then allergies… she's lied about everything.

@HillaryClinton You are a Pathological LIAR. If you lied to us about your health, what else have you lied about?

@HillaryClinton can't be trusted! How many times has she lied to America now? #NeverHillary https://t.co/5pFr0uGqiC

Hillary Lied Again. The story isn't just that Clinton is ill. It's that, once again, she's untrustworthy https://t.co/hOLgoIWO2M

Crooked @HillaryClinton has lied about her health, her finances, her policy positions, and life history. #ClintonHealth #NeverHillary

Today shows @HillaryClinton will lie until she can't lie anymore. If she lied about being sick, what won't she lie about? #HillarysHealth

Considering the Clinton Campaign has lied and obfuscated the truth at every turn, it's likely pneumonia is the LEAST of Hillary's problems

@sallykohn Turns out it wasn't allergies or just a little heat exhaustion. Could it be the Clinton campaign lied? OMG, totally no way!

Kinda odd that no one on her staff would know she was ill, while they knew many others were https://t.co/fF90dMYcjh pic.twitter.com/ygrok5CZWQ

If @HillaryClinton actually has pneumonia, she should have not been contact w/the public. She needs to learn to be honest & transparent

@HillaryClinton – Be well soon but you Must be open & trusting of US if you want our trust in you! Stop your trump evasion & be Honest!

@HillaryClinton so. Alergies? Frog in her throat? Over heated? Pneumonia? I wish the best but let's start being honest. Try it.