Once upon a time pre-internet, the only folks on the right working full-time to expose liberal media bias were the Media Research Center and Accuracy in Media, whose founder, Reed Irvine, Washington Post editor Ben Bradlee famously deemed an animal that urinates backwards when he complained about unfair coverage.

But today, with Facebook, Twitter and countless websites there is no shortage of voluble and visible conservative press critics. However, Chicago radio talk show host William Kelly, who recently wrote in The Daily Caller that he got arrested for questioning Bill Clinton about his broken promises at a 1993 Chicago town hall, is staking out new grounds with an upcoming cable television show where he hopes to be the liberal media’s chief prosecutor.

Kelly just won official FTC trademark status for the name of his new show, Media Malpractice. Instead of just exposing bias, Kelly is taking a more legalistic approach. He wants to show how journalists who shill for Barack Obama or Hillary Clinton are blatantly contravening the standards and practices of their own profession.

But since unlike doctors or lawyers reporters can’t be sued for malpractice or anything other than libel — even welching on promises of confidentiality to sources is not legally actionable if my understanding is correct — Kelly wants to hold them responsible by turning his show into a cross between a court room and the “Daily Show.”

Right now, he says, the media is “getting away with almost anything.”

Kelly says he is launching the show sometime before the election, exact date not yet determined, because the “Clintons are dangerous people. I don’t want to see them in the White House.”

Kelly, who a Chicago television reporter was threatened to deck when he ambush interviewed Chicago Mayor Rahm Emanuel in 2009, is vowing to employ similar confrontational tactics for his show. But he says, despite the recent mauling and his indictment — quickly dropped after he ran for Congress — he is not worried about more blowback.

Kelly’s ideal first guest would be somebody named Steve Benen. He is the “Rachel Maddow Show” producer who writes the show’s official blog.

Because any doctor or lawyer who behaved like Benen has in recent months and particularly Monday evening. when he could no longer hide behind his computer, could be legally sanctioned for making misleading statements to disparage third parties.

Suppose, a doctor who works full-time for the George Washington University medical center, abruptly announced that the Georgetown University Hospital was “not a legitimate health care provider,” wrongly accusing them of having mistreated a patient.

But then just five days later the same doctor proceeded to urge his patients to go to George Washington, citing the excellent work they did.

Then suppose he had ignored multiple inquiries asking the obvious question if the Georgetown was not legitimate why was he sending patients there? But when this doctor when finally reached on the phone he professed total amnesia about the whole matter. And refused to even re-iterate his original charge.

This is a good parallel for Benen’s recent antics. On May 25, Benen wrote on the Maddow Blog that that The Daily Caller was “not a legitimate news organization,” citing education editor Eric Owens’ completely objective story that Obamas’ post-presidential home was located near a Mosque.

But five days later he directed readers to Daily Caller political reporter Alex Pappas’s exclusive interview with Sen. Jeff Sessions (R-AL). Benen subsequently ignored multiple tweeted inquiries about this contradictory behavior. After all, if the Daily Caller is not legitimate why he is quoting the Sessions interview? How does he not know the whole thing isn’t just Tucker Carlson’s acid trip?

After ignoring multiple emails and tweets, Benen was finally reached on his cell phone Monday night. The Washington Gadfly asked why he linked to a story in a non-legitimate news publication.

Anybody with a minimal degree of verbal dexterity who lives in the real world and is used to be held accountable for his own words — like lawyers at a court hearing asked by the judge about their briefs or a mid-level manager discussing his memo to superiors–probably could have found innumerable ways to deflect that kind of inquiry. Just one obvious rejoinder to the question is, “Because just like broken clocks are right twice a day you guys finally got a story correct.”

Instead, Benen repeatedly professed total ignorance and befuddlement about the whole matter. 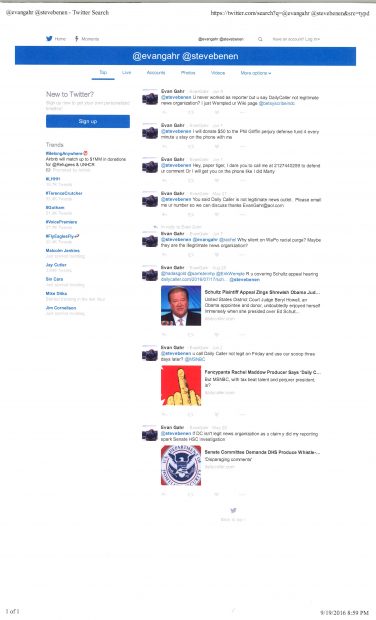 Fine, you have total memory loss, his caller persisted. NBC has a great health plan maybe you should consult a neurologist. But do you believe The Daily Caller is not a legitimate news organization?

“I am afraid I don’t know what you’re referring to,” Benen insisted.

Then, instead of at least being man enough to angrily slam the phone down when cornered, like Washington Post executive editor Marty Baron, he said, “I wish you luck, goodbye” and hung up.

Told about the conversation with Benen, Kelly said, “I’ve always believed that MSNBC needs a show like Media Malpractice to call them out on their bias. I want to stand up to these bullies. If you do stand up to these people they will back down.”

1
ABC News Suspends Reporter On Eve Of Project Veritas Exposure
Media
2
Another Republican Congressman Announces He Will Not Seek Reelection
Politics
3
Woman Dumped By Fiancé For Being 'Too Fat' Lost 112 Pounds And Wins Miss Great Britain
Entertainment
4
Here Are The 2 Republicans Who Voted Against Protecting Unborn Babies After 20 Weeks
Politics
5
Respirators Listed For Over $10,000 Amidst Coronavirus Fears
US