Watters, who works for Bill O’Reilly‘s program, is known for his irreverent antics and ambush interviews in segments called “Watters World.” His brand of journalism obviously isn’t for everyone. ABC’s Jimmy Kimmel does a similar segment in which he has a reporter hit the streets and make people look as dumb as possible.

[dcquiz] This week, Watters went to Manhattan’s Chinatown to sample political opinions on the presidential election. In many of the interviews, his subjects laughed and seemed to be in on the jokes, whether he addressed dancing in China, stolen street watches (which exist all over Manhattan), massages, herbs or karate. Probably the worst of it was when he interviewed an old, hobbling Asian woman who has no idea what he’s saying. He obnoxiously persists anyway, which just seemed somewhat cruel.

But not because of her race — but her age.

But the liberal media wasn’t happy with the result. 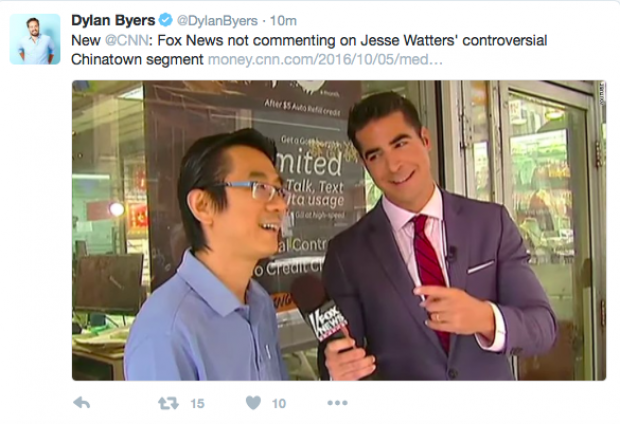 Byers made it the grand headline on CNN Money.

Offended reporters went on Twitter to express their emphatic outrage.

Media Matters featured several offended Asian journalists such as CNN’s MJ Lee, NYT‘s Farhad Manjoo, and Politico‘s Seung Min Kim. Many of them agreed that this was the “most offensive” video they had ever seen.

To be sure, NYT‘s Alex Burns, who is married to Lee, is also offended.

“All you need to know: Fox declines to comment on flagrantly racist O’Reilly segment,” he wrote.

The Intercept‘s Lee Fang, who is Asian, said the video was “unabashedly racist.”

Will Doolittle, a journalist, remarked, “Waters is an embarrassment to journalism. If he walked into our newsroom, I’d walk out.”

Asawin Suebsaeng, an Asian entertainment reporter for The Daily Beast, was especially offended by the Watters video. 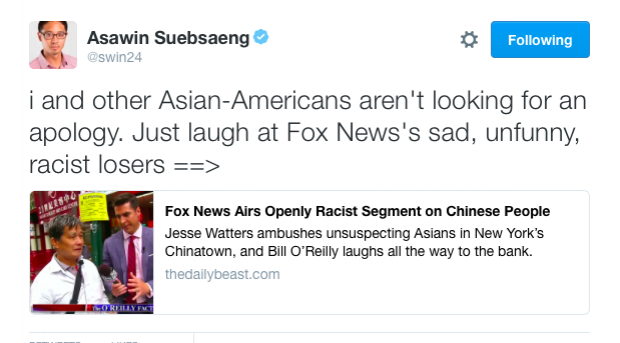 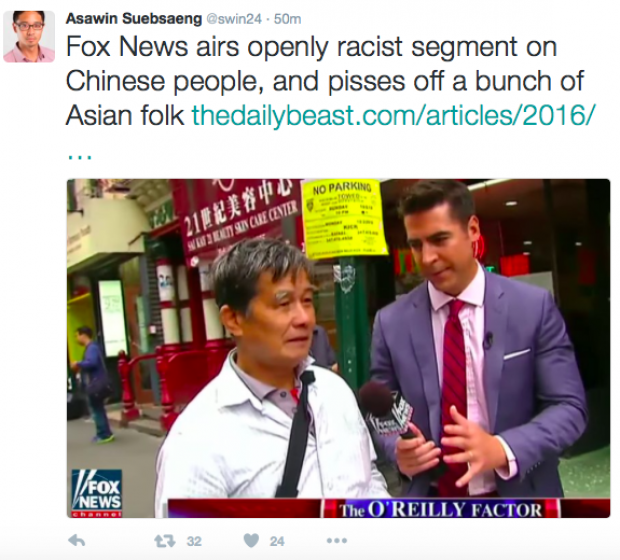 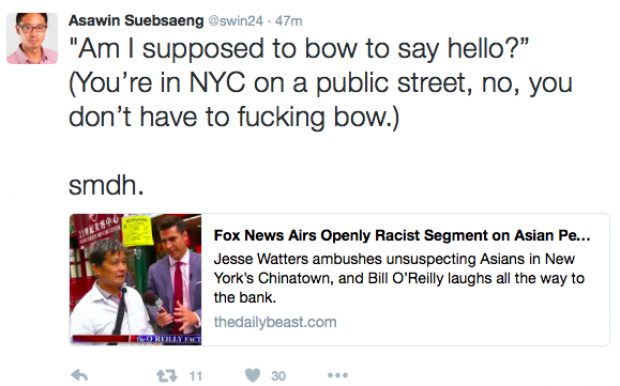 Swin, who has jokingly referred to himself as Swingazi (you know, in reference to those hilarious Bengazi murders), recently hosted a Harambe-themed party. As you can see, the ice luge pictured below was in the shape of Harambe, the 17-year-old gorilla who was sadly fatally shot at the Cincinnati zoo after a 4-year-old boy crawled into his den.

Like the Watters Chinatown video, somehow people have taken offense to Harambe memes and jokes.

But not Swin, obviously. (Hopefully he and his friends won’t go Apeshit on me for this story. But I think it’s safe to say that Harambe is not laughing.)

“There’s another side to Harambe’s popularity—one inexorably tied to racist ideas about black people, Africa, and gorillas—that plays a large, troubling role in the memes’ collective staying power,” Charles Pulliam-Moore wrote in Fusion. 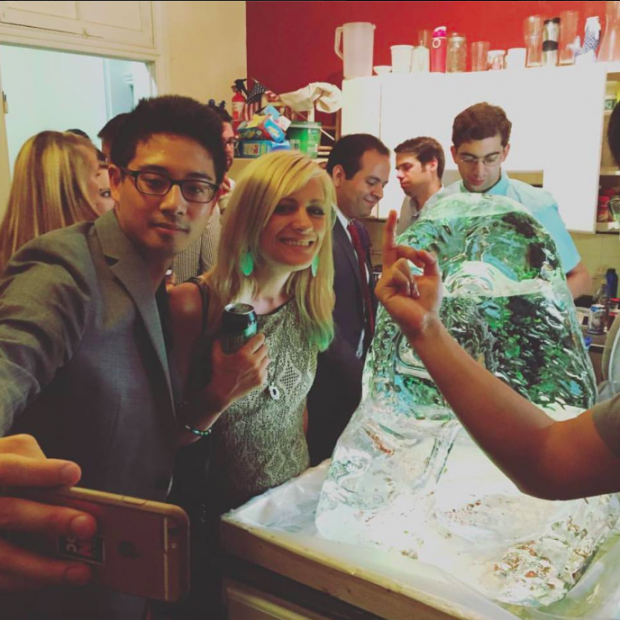 The perpetually offended Jesse Berney, formerly a writer for the left-leaning Blue Nation Review who now contributes to Rolling Stone, wanted to push the matter further.

But not all journalists are offended by Watters’ video.

“I think this is another example of Beta males and social justice warriors ruining America,” a right-leaning Washington reporter told The Mirror. “They’re also a corall of neutered pussies.”

A half-Asian Washington journalist was also able to see the humor in the video.

“This wasn’t offensive, at least not everyone is butthurt over a satirical video,” he told The Mirror.