It’s the sketch everyone saw coming.

“Saturday Night Live” started off the show with a cold opener that riffed on the vice presidential debate, but quickly interrupted to go to a CNN breaking news update that was about the leaked audio between Trump and former “Access Hollywood” host Billy Bush. 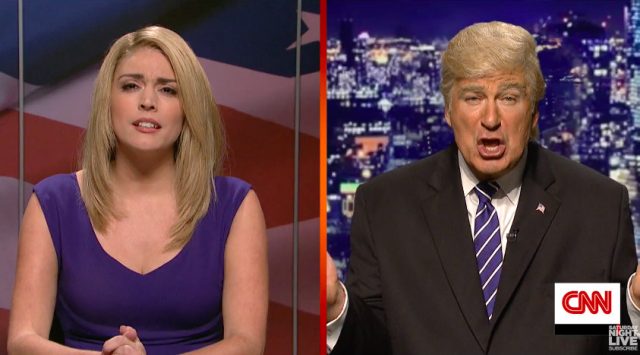 “I mean what normal, red-blooded American doesn’t want to impress Billy Bush,” Alec Baldwin’s Trump said. “You have to admit it’s kind of funny the only Bush in this election that matters is Billy.”

“Women, if you give me a chance, I promise I can do a whole lot more than just grab it. I can also bop it, twist it, and pull it,” Baldwin then said.

1
Here's What The Lead Roger Stone Juror Wrote In Her Jury Questionnaire
Politics
2
FARRELL: It Ain't Over For Andy McCabe
Opinion
3
FBI Agent Faulted In FISA Report For 'Significant' Errors Has Finally Been Identified
Politics
4
Shaq Drops F-Bomb Live On CNN At Kobe Memorial
Editorial
5
Donald Trump's India Trip Showed The Media's True Colors, But What Does It Mean For The US-India Trade Deal?
Editorial