But he gets a fair amount of medical mysteries in his inbox.

And let’s just go ahead and say they are not garden variety bumps and bruises.

In the latest WikiLeaks email dump of his inbox, Podesta deals with a campaign employee who has a migraine that lasts four days and needs to go to urgent care for a migraine shot. In another exchange, someone named “Tony” — perhaps his brother, lobbyist Tony Podesta with whom he owns Podesta Group — mixed Percocet and wine. And finally, there’s the matter of the pinky finger on his left hand.

In one email, he urges campaign aide Milia Fisher to “take care of herself” and to stop ingesting genetically modified organisms. 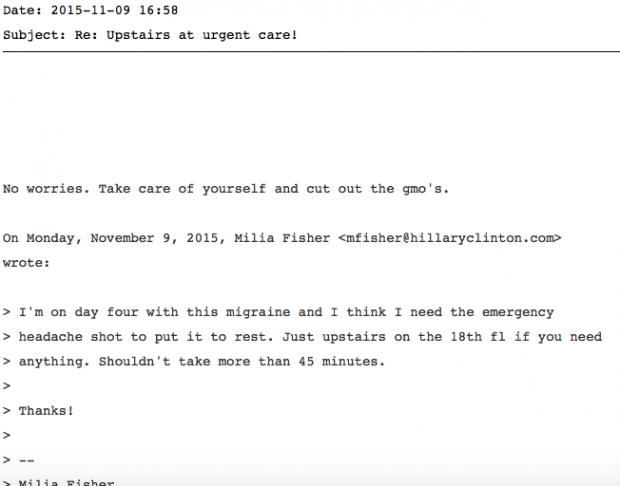 In a December, 2014 exchange involving “Tony,” the subject line reads: “Are you awake?”

The 8:14 a.m. email is from Catherine Chieco, who lives in Washington and has a Master’s degree in Social Work. She wrote:

“Lets talk before you come over ..let me know when i can call you. Tony seems to be in a lot of pain. A bit hard to deal with, and uncommunicative..big surprise. He should not have left the hospital yesterday in my opinion. I plan to call either the doctor or nurse to discuss next few days.. I think having someone look in on him, nurses aid etc. might be a good idea, and certainly while i am out of town. Though maybe he will improve dramatically… He will likely listen to any of this if it comes from you. He drank wine last night, though it is contraindicated with the meds he is taking.”

John Podesta asks, “How much wine did he drink? That’s terrible with Percocet.”

Chieco wrote, “I poured a small amt then he had a bit more..but about half a glass.”

Podesta replied, “Not so bad.”

“Tony is in hospital i am on phone now trying to get information,” she wrote.

Podesta replied, “Left you a vm. Talked to him. He still has a hard time with that but definitely seems on the mend.”

Chieco said, “I should know by now he has people to take care of him:) Used to being the mommy.”

In December, 2014, something beyond a boo-boo happened to the little finger.

Podesta asks, “Ok. What would happen if there was a fracture? I pretty much don’t want to cancel or postpone the trip. I’m fried and need the break.”

Mustafa Haque, a hand surgeon in Chevy Chase, MD, writes, “Would recommend an X-ray. There could easily be a fracture with that amount of swelling.”

Podesta replies, “Thanks Doc for your attention to this. Finger is doing better. Swelling and redness down. I’m sending along some pictures. I’m on an early flight to California in the morning. I can get an Xray out there if you think it’s necessary, but I’m inclined to let it go. Thanks again and have a great holiday.”

1
Tucker Carlson Insists Biden 'Will Not Be The Democratic Nominee.' Here's Who He Predicts Will Assume The Mantle
Media
2
Trish Regan Out At Fox Business
Media
3
'Don't Be A Cutie Pie': Trump Mocks ABC Reporter During Coronavirus Briefing
Politics
4
Trump Praises Rachel Maddow 'For Putting Our Military On Full Display'
Media
5
Joe Biden Accused Of Sexually Assaulting Former Staffer: 'Penetrated Me With His Fingers'
Politics