Kathleen Willey, one of Bill Clinton‘s sexual assault accusers, told FNC host and ardent Donald Trump supporter Sean Hannity that the “mainstream media” has never reached out to her.

Well, the media is fighting back.

Willey was a volunteer in Clinton’s White House Social Office in the early 90s. She said she was sexually assaulted by then-President Clinton in the Oval Office when she allegedly went there to speak to him about a job. In her book, Target: Caught in the Crosshairs of Bill and Hillary Clinton, she says she was subjected to threats and extreme intimidation by goons purportedly hired by Hillary Clinton.

Willey and two other women who have accused Bill Clinton of sexual assault appeared on Hannity’s program Thursday night.

The women all annihilated the media for failing to approach them.

At least two reporters and TIME Magazine are insisting that they indeed reached out and in one case spoke to Willey. One is Olivia Nuzzi who writes for The Daily Beast. 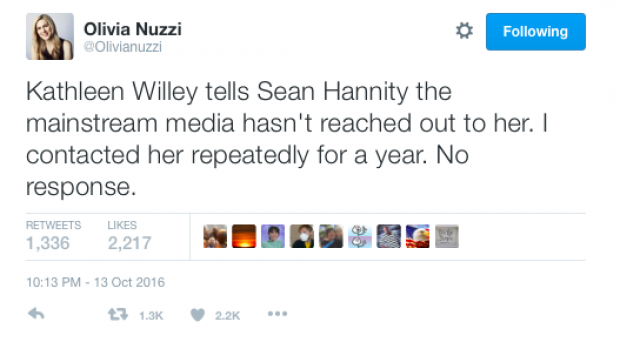 Glenn Kessler, who writes the fact checker column for The Washington Post, is fact checking Willey. He said he spoke to her off the record in January.

“All three women also blasted the mainstream media for ignoring their stories, but TIME had reached out to Broaddrick and Willey but they chose not to be interviewed,” Alter wrote in her story.

When a follower tries to explain why Willey would say this — even if it wasn’t true — NPR’s Sarah McCammon challenges the claim. 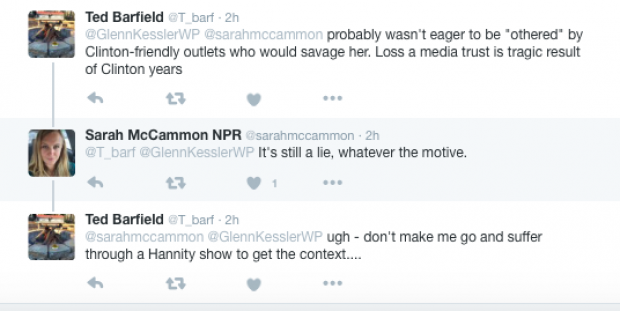 The journalistic rule tends to be that you cannot report anything that is said in an off-the-record conversation unless you somehow verify the contents through other on the record sources. At the same time, you can never reporter what that person has told you if you have agreed to an off-the-record arrangement.

In this case, however, with Willey is trying to insist that reporter never reached out to her, breaking that arrangement seems not only understandable but necessary.