Politico‘s Chief Political Correspondent and podcast host Glenn Thrush has come under fire for some of his email chats with Hillary Clinton‘s campaign Chairman John Podesta. In a previous exchange, he sent Podesta a story to proof — not an act that is unheard of for reporters, but probably not one that should happen with the head of a presidential campaign. A new exchange from February has him practically apologizing for the “human impact” of his “shitty story.”

Speaking of shitty, his Twitter feed has been a steaming pile of poop for days.

On Wednesday morning, a follower told him, “You have lost all credibility.”

Thrush tried to brush it off: “With you and your soulmates, which isn’t ideal — but I’ll muddle thru.”

Let’s have a look at his winter exchange with Podesta to see what is prompting this fresh onslaught of hate. The messages are part of a larger batch of emails being released by Wikileaks.

THRUSH: Saw your tweet. I think u know I wasn’t fabricating you anything… No need for a response, but I hope u understand that I take this stuff seriously and try to be sensitive to the human impact of these shitty stories I take zero pleasure in them — whether u folks believe me or not. Cheers and good luck today.

PODESTA: I have no doubt you had sources for your story and weren’t just making it up, but my tweet was accurate so 1) maybe you should question your sources or 2) maybe you are talking to people on the inside who the pressure is getting to.

In the above email Thrush was responding to this tweet from Podesta from February 8, 2016. 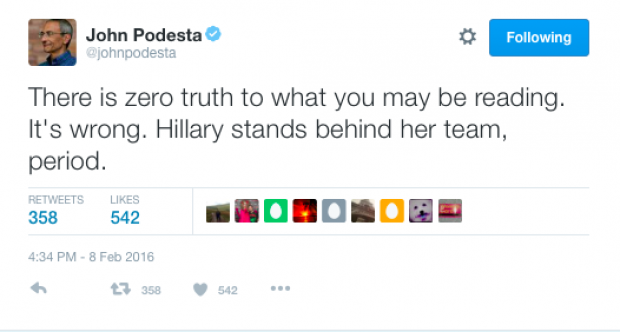 Back in February, Thrush co-bylined a story with politics reporter Annie Karni about a possible “shake-up” within the Clinton campaign just as she was expecting to lose the New Hampshire primary. Sen. Bernie Sanders, in fact, crushed her in the primary.

The story — which could hardly be considered vicious — came after a slim win in Iowa.

Thrush and Karni reported that Hillary and Bill Clinton were upset about the campaign’s messaging and had “become caustic in their criticism of aides.”

This graph was particularly stinging.

“Ultimately, the disorganization is a result of the candidate’s own decision-making, which lurches from hands-off delegation in times of success to hands-around-the-throat micromanagement when things go south.”

The Mirror sent an email request for comment to Politico Spokesman Brad Dayspring, who is a BIG FAN of The Daily Caller.

Some of the people trolling Thrush on Twitter are not cutting him any slack.

One follower asked, “Do you have any self respect @GlennThrush?”

Thrush replied, “Hey Mensa: You do know that email was referring to a bombshell story I broke about huge internal dissension in the campaign? Unfuckingreal.”

(Mensa is an IQ society for people who score in the 98th percentile on the official intelligence test.)

In a Facebook letter to friends (that he linked to on Twitter) he apologized for all the vitriol coming his way. He also suggested that his loved ones consider blocking him until after the election.

Apologies to all my actual friends on Facebook. I’m being trolled by Breitbart, Trump, alt-Right mouth-breathers. It doesn’t bug me, but these are angry gnomes who live in their parents’ basements and can’t get girls (or boys) answer their 2 a.m. texts. They don’t really bother me but I have a high tolerance for asshole.
To sum up: Fuck ’em, by ignoring their comments.
Or maybe just block me for the next 20 days.
Cheers/love to all.

UPDATE: Dayspring replied to The Mirror request for comment.

“The story referenced in this exchange was Glenn’s bombshell February report detailing the potential overhaul of the Clinton campaign staff, which meant that people were going to lose their jobs. Staffers obviously were emotional after reading the report, some calling in tears. Glenn mentioned the ‘human impact’ because he’s a human being who doesn’t take delight in the pain or misfortune of others, but understands that it is his duty to report it.”

When asked if he was being sarcastic about the “tears” Dayspring replied, “Actually no, no sarcasm. Campaign staffers called in tears about the possibility of being fired.”