How do you say Trump in Polish?

On the way into the hotel, a serious dark-haired man in a dark suit stopped me to ask who I was: “FBI or press?” he asked.

Hordes of journalists from all over the world occupied the better part of the candidate’s hotel ballroom and waited hours for him and his children to show up for a ribbon cutting and hopefully a few soundbites that might satisfy the news cycle. During his speech, Trump, in an unusually subdued, tranquilized tone, congratulated the hotel on being “under budget and ahead of time.” More importantly, he gave a shout-out to former GOP House Speaker Newt Gingrich for his appearance on Fox News’s Megyn Kelly‘s program in which he said Kelly was “fascinated with sex” and “doesn’t care about public policy.”

This was not campaign rally Trump. This was TelePrompter Trump on downers.

A TV reporter for one of the major news networks had two words for me: “Two weeks.” The correspondent told me he works 20-hour days and can’t wait for a break. He said this is it. He’s never covering another presidential race.

IJR‘s Creative Director Benny Johnson came into the gorgeous ballroom chomping ferociously on an apple. He left the browning core resting on a ledge beneath a mirrored wall so he could stand amid throngs of journalists waiting (and waiting and waiting) to see what Trump had to say.

It’s unclear if Johnson was ever going to return to his apple. 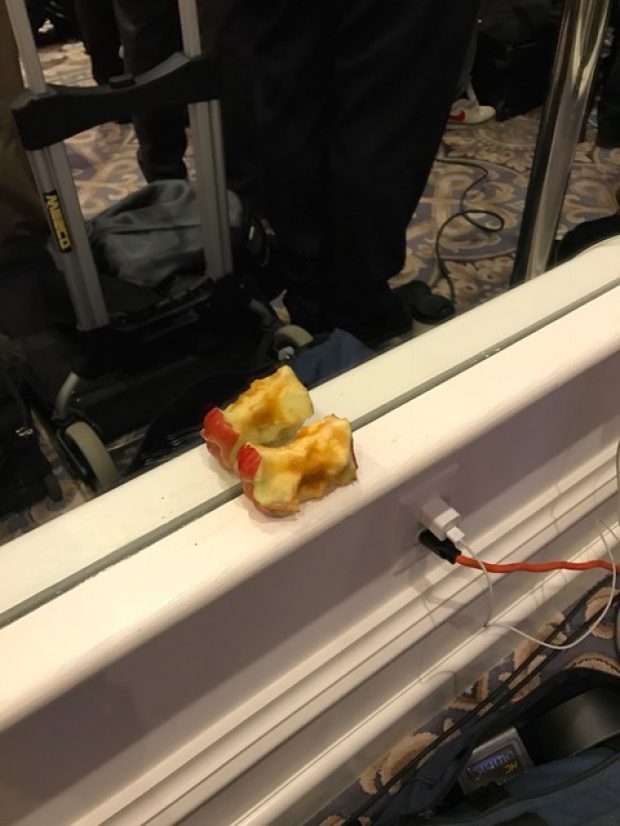 Trump was a more than a fashionable 30 minutes late when he walked toward the golden podium at 11:30 a.m. with his children, Ivanka and Donald Jr. The Trump campaign ordered TV and camera people to arrive at 5:30 a.m., which is pretty excruciating considering what they got.

The Mirror ran into WaPo‘s lefty columnist Dana Milbank, who really is as short in person as he seems on TV. Like the Incredible Hulk (well, maybe Hulk’s 10-year-old child), Milbank purposely towered over me to prove that he’s taller than me since I’ve previously described him as “petite.” (Our slogan needs to be PETITE JOURNALISTS UNITE!)

I asked if he thinks Bloomberg‘s Mark Halperin was “soulless” before the 2016 presidential election. A recent Milbank column said as much. He carefully weighed his answer. “Any time I talk to you, trouble ensues,” he said. He told me his fiancé is 5’1″ tall. He gave me a quick, seemingly soulful hug and walked away.

“Finding a scapegoat in media is probably not the right thing to do,” Marcin Wrona, a U.S. correspondent for TVN Poland, told The Mirror.

He said serious issues like Obamacare and healthcare premiums “don’t interest the Polish people at all.”

So what gets attention on Polish airwaves?

Kind of like sticking steak in your hot fudge sundae, the correspondent says he keeps inserting the topic of Hillary’s emails into the mix of Trump sex scandals just to get them in. But he reasoned of the sex, “Europe is a bit more relaxed in that respect. Of course gossip is what people love.”

Asked how he feels about Trump bashing the media at every turn, he said, “It is frustrating, but what can you say? WRONG? There are elements in public life that tend to blame the media for everything wrong in their lives.”

But hostility toward the media is nothing new, he said, recalling a satellite truck that burned during a demonstration in Warsaw a decade ago.

“We cannot forget that some accusations are true,” Wrona said. “It’s not like we are white as snow. We really need to do a public confession — or the American media should.”

“Some could see it as opportunistic,” D’Souza said of Trump’s relationship with the media. We’ve seen this before with Rob Ford. He often talked about the media being against him and people believed him.”

He said some of Trump’s complaints against the media don’t make sense.

For example, Trump says the media doesn’t show how big his crowds are. But he sticks them in a pen and won’t let them move around. “He calls them on things they can’t technically do,” D’Souza said.

A male reporter covering the election for a Middle East audience (which is how he wanted me to describe him) said he isn’t afraid of Trump’s anti-Muslim policies. “I’m not worried with the terminology because it couldn’t happen,” he said. “There are checks and balances in this country that won’t allow half the stuff [he wants].”

The journalist, whose audience is in Iran, Iraq and Syria, says Trump uses the media to his benefit.

He says his audience doesn’t give a lick about Trump’s sex scandals. Iran, for instance, is focused on nuclear panels. He isn’t sure how much Trump understands about foreign policy, but cracked, “At least he knows where Aleppo is.”

Asked if it’s shallow for media outlets to focus on ratings, he replied, “Yes, especially the print media who are dying.”

WaPo‘s Milbank might also take interview lessons from TV Tokyo’s Kodai Uchida, who was friendly and willing to talk to The Mirror about substantive media issues. And he didn’t even speak English.

Instead, he hailed his translator from across a crowded room so we could understand each other without resorting to drawing pictures.

Asked what it has been like covering Trump, Uchida rattled off something in Japanese that included two English words.

“Trump is not completely open to the media. I feel that Trump is taking advantage of the media.”

How does Uchida feel about Trump calling the media “dishonest” and “liars” at his rallies?

“It’s fine if we have that criticism from our readers, but having this form of criticism [from him] I can’t accept,” he said.

Without a doubt, media hatred is global.

“Even in Japan, when things are not going their way, people blame the media,” Uchida said. “That’s universal.”

What isn’t universal are viewers’ appetites for sex scandals. Compared to Poland, for example, where sex scandal coverage is all the rage, Tokyo isn’t interested. At least according to TV Tokyo.

“What’s most important is what we’re broadcasting as fact,” he said.

Dalton interjected here to say, “We don’t want to go in the Monica Lewinsky direction if we can help it. We’re not really interested in sex scandals.”

Unlike most reporters, Uchida chooses TelePrompter Trump over Stump Trump.

“He says he prefers to report something serious as opposed to comical,” Dalton said, relaying Uchida’s thoughts.

What do people generally think of Trump in Japan?

But let’s get back to the pesky media.

Gesturing to the room crawling with press, Dalton said the American media is obviously biased.

“I think half of this is serious and half is a joke, but I don’t know which part is serious and which part is a joke,” he said. “…I hate to say it, but we kind of have a Marie Antoinette scenario — let them eat cake. I’m not saying she deserved to lose her head but there is a chopping block for obfuscating facts.”

But it’s not as if Trump’s campaign makes it easy for journalists who don’t work for Breitbart News.

A white male American journalist at the hotel event preferred to speak on condition of anonymity.

He said covering Team Trump is a drag in that they don’t “return his calls or emails when I need it. Radio silence. No Hope Hicks. Yeah, annoying.” He finds Trump’s behavior toward the media “disingenuous.”

“During the primary, the media was his best friend,” he said. “Now that he’s turned over a few rocks — a lot of rocks — now he’s singing a new tune.”

Washington Post media reporter Paul Farhi was also in attendance in the Trump ballroom. (Milbank could take lessons from him, too.)

Asked about Trump’s treatment of the press, Farhi said, “He’s certainly been very critical. Nobody likes us, but he’s made it a point to bash the press. It’s a good strategy.”

But the national media writer is not overjoyed about it.

“Who likes getting beat up?” he asked. “I also don’t think it’s personal.”

Farhi believes Trump’s behavior toward the press will have lasting negative effects.

“I think it will,” said Farhi. “We’ve never been in high regard, but I think [this election] took a big leg down. I don’t think we’ll ever recover. Trump has certainly pushed it along.”

Shouts of “Boo Trump!” could be heard in the brisk fall air after the hotel event concluded. A medium-sized crowd of protesters carried signs and shouted things like “Donald Trump is a disgusting sexist pig!” and “Shame on Trump! Shame on Trump!”

Outside along Washington’s famed Pennsylvania Avenue, CNN’s Dana Bash had a testy one-on-one with Trump with his wife, Melania, by his side.

“First, I want to ask you about your event here,” said Bash. “There’s new audiotape of you talking about the fact that you really have relied on your popularity and the fact that people come to your events and that helps you with free advertising. Is that what this was about?”

“No, not at all,” Trump replied. “This was under budget and ahead of schedule. … If the country would do that it would be in much better shape. … You have been covering for the last, long time. I did yesterday eight stops and there major speeches. … For you to ask me that question is actually very insulting because Hillary Clinton does one stop and then she goes home and sleeps and yet you’ll ask me that question. I think it’s a very rude question to be honest with you.”

Bash pushed hard on how much of a check the GOP candidate would write for himself to spend on advertising. “How much are you willing to put in to put up new ads?” she asked repeatedly.

Bash again pushed for a specific check amount. That’s when he’d finally had it.

“Let’s go for your next question, Dana,” he said in a crabby tone, clearly done with her line of questioning.

A day like this isn’t complete without a crazy cab ride home.

Laughing at all the protesters shouting at Trump, he laughed and says, “He’s crazy. He’s taking too much drugs.”

The black cabbie with a long, wild, white, frizzy mane won’t tell me where he’s from. In fact, he’s media savvy and tells me I can write anything he says but I cannot use his name. I can say “taxi driver.”

He quickly tells me, “We are in trouble. He is going to be elected.”

And how does he know this?

“I don’t think American woman are ready for woman president,” he said, explaining that he was a political science major in college and conducted his own random survey. “When I say, ‘Are you going to vote for Hillary?’ they say ‘THAT BITCH.'”

Wild Hair is no less blunt on the subject of Trump and the media.

“Oh man, that guy is funny,” he said laughing hysterically. “He hates you.”

More reasonably, he said, “No, media is just like society. Media is a mix. The media is not criminal. This guy is stupid.”

Which is why he’s voting for Hillary.

“I’m going to vote for Hillary, but my vote is going to be a lost vote.”

As I was disembarking, Wild Hair asked, “Wanna be friends?” 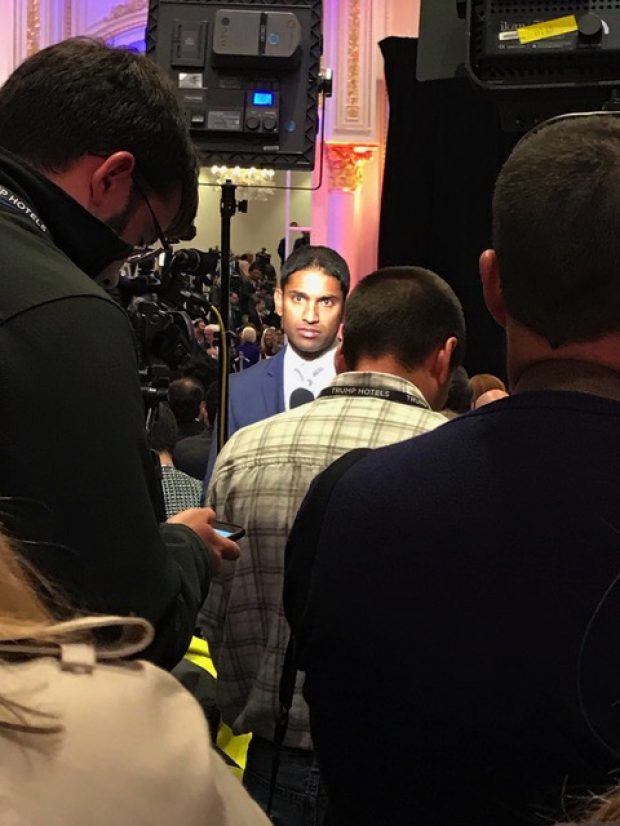 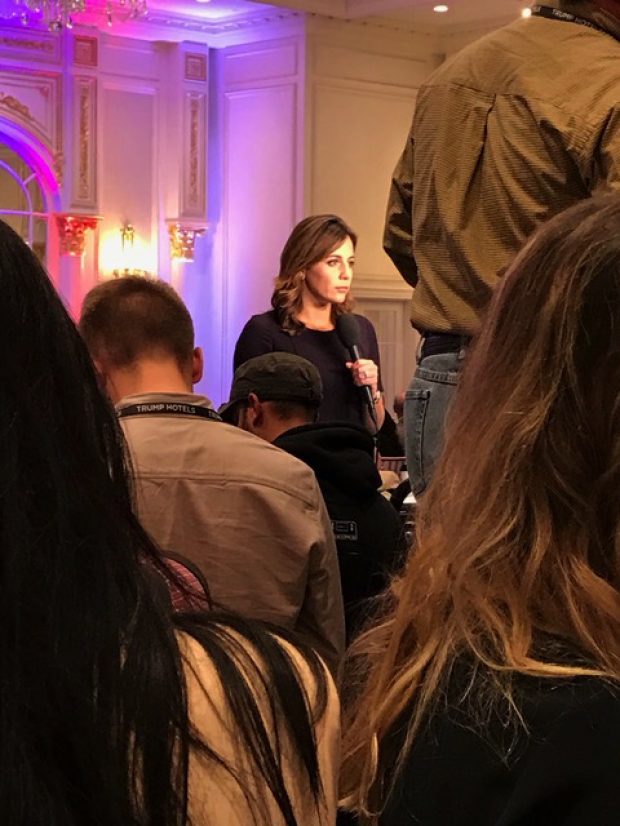 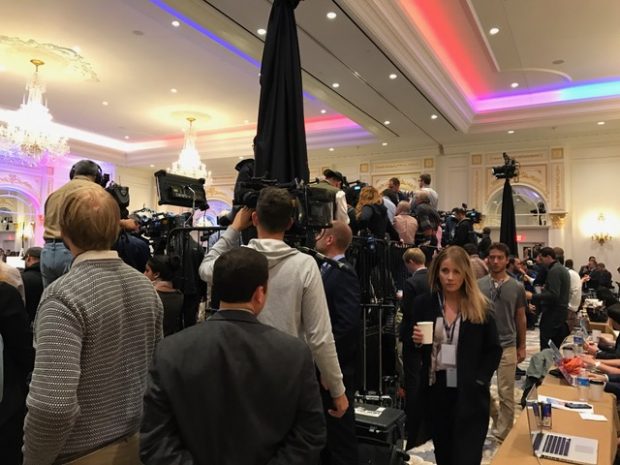 The media swarms a ballroom inside Trump Hotel International. 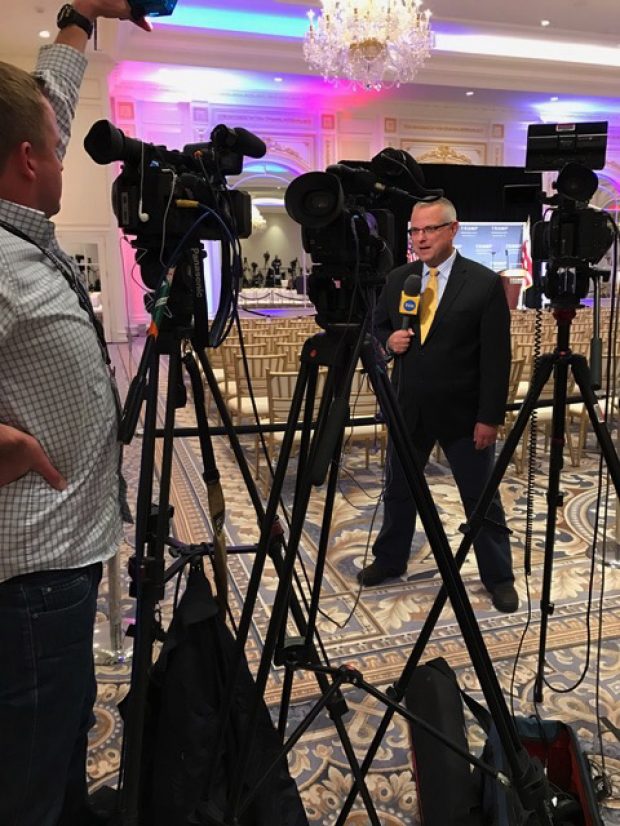 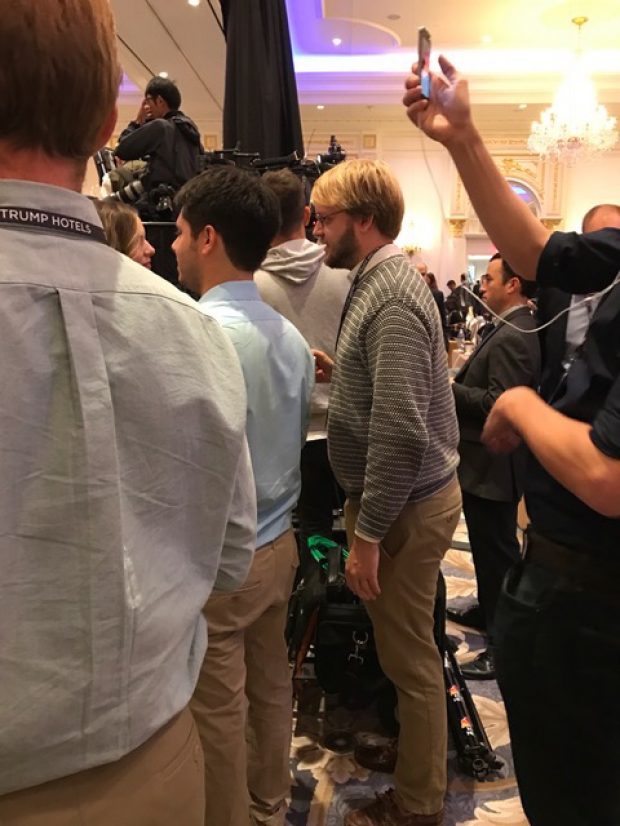 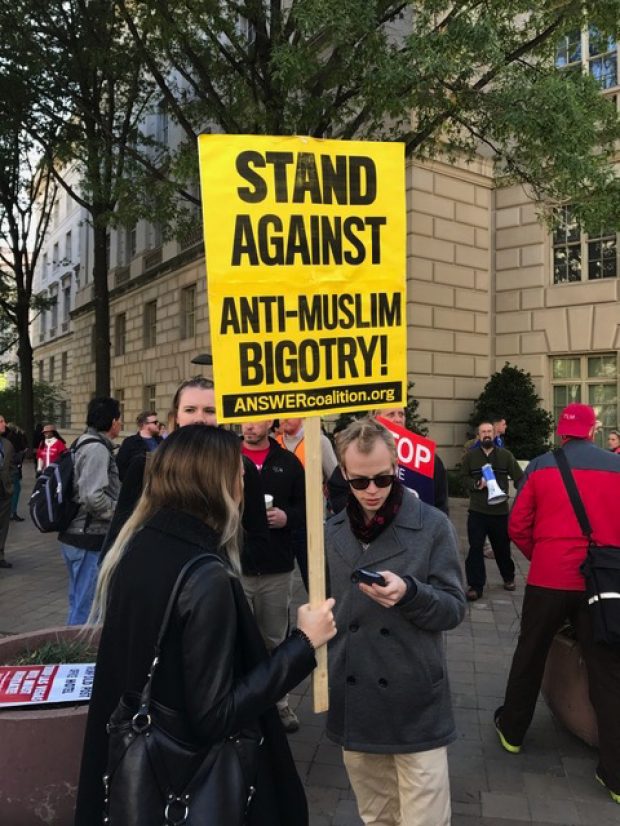 Protesters line the street outside the hotel. 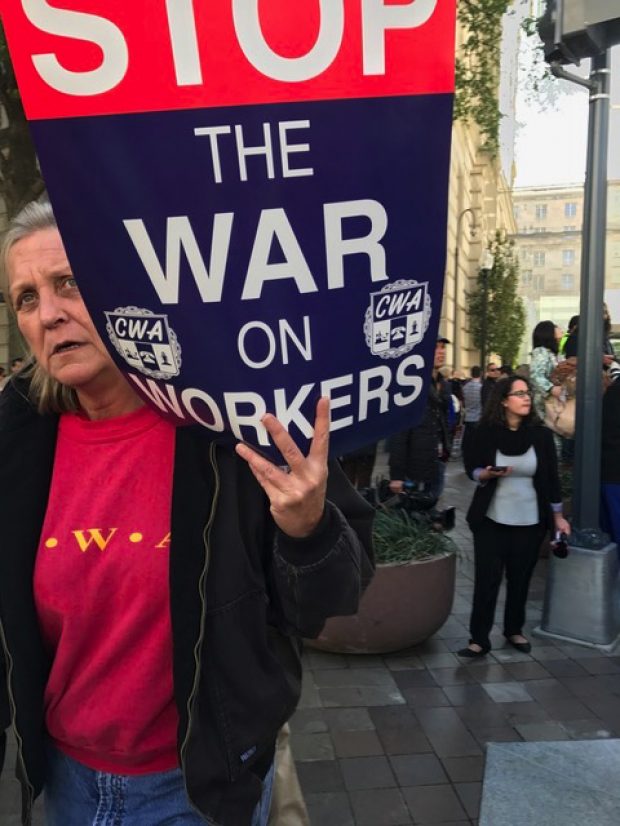 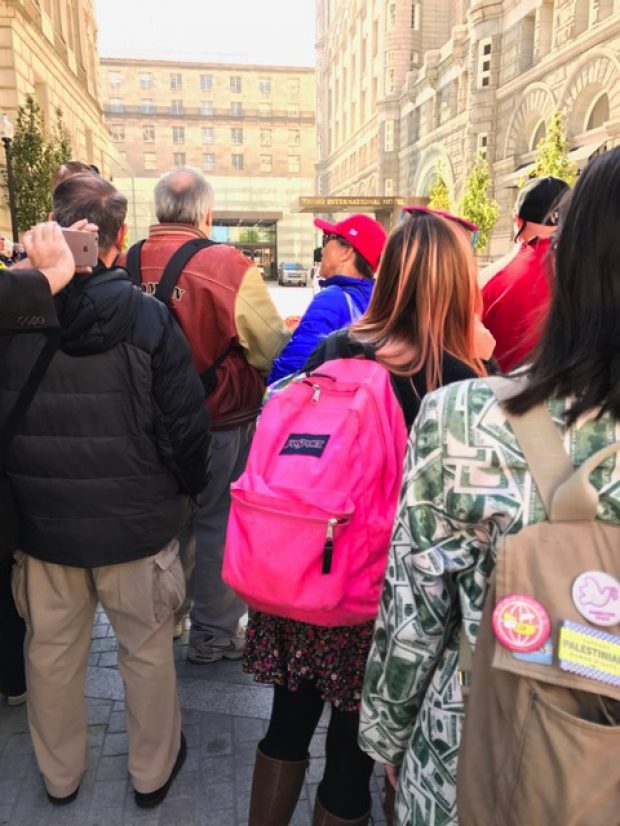 Don’t underestimate that woman with the pink backpack. 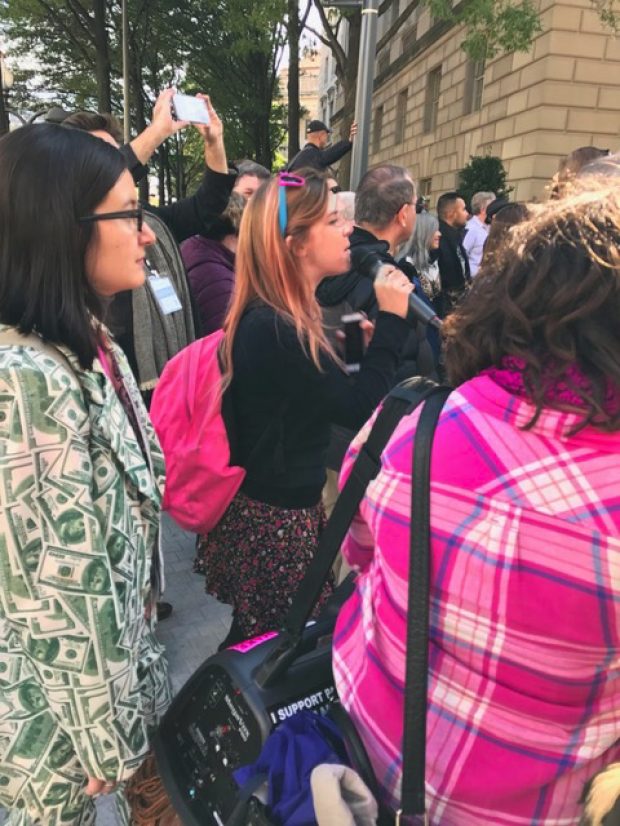 With pink streaked hair and a “Code Pink” sign, the woman shouted: “Donald Trump is a sexist pig!”