An attachment to a hacked email leaked this morning by Wikileaks seems to show Hillary Clinton’s campaign staff palling around with some of the very folks they’ve denounced in the past.

One email’s subject line reads, “RE: Can u give us the donor list please from Leahy event?” and includes in its attachments a spreadsheet called, “Copy of PodestaGuests.” The spreadsheet is a list of fundraiser guests, with employment info and contact info. “Leahy” is presumably Patrick Leahy, a U.S. Senator from Vermont.

It is unclear when this event took place, but it could be the same “Leahy event” referred to in previously leaked emails, that was marked as taking place on July 21st of this year. 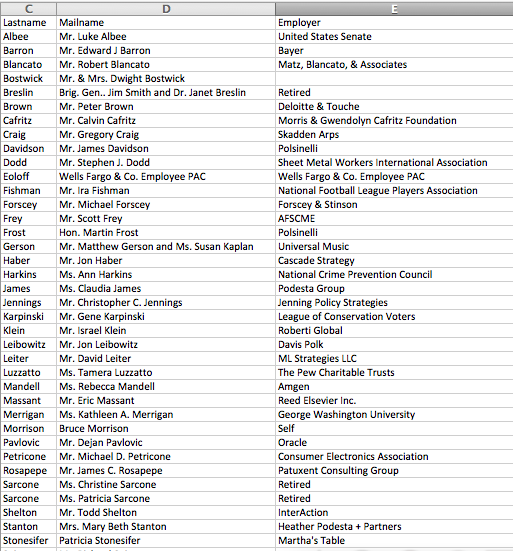 Some names listed here are sure to raise eyebrows, like Edward J Barron, an employee of giant pharmaceutical company Bayer. Anita Eoloff also appears on the list, with both her mail name and employer listed as “Wells Fargo & Co. Employee PAC” Eoloff is has been listed before as the company’s executive vice president. Wells Fargo prominently sponsored an event earlier this year called “From Black Panthers to Black Lives Matter, the Movement Continues,” which featured an image of Deray Mckesson, a prominent Black Lives Matter activist who has defended looting before, next to the Wells Fargo logo.

Other big corporate attendees include Dejan Pavlovic of Oracle, Frannie Wellings of Google, and Rachel Welch of Time Warner Cable.

Nancy Zirkin, a self-described “Long time activist and lobbyist” and Executive Vice President at the Leadership Conference on Civil Rights was also listed. The Leadership Conference on Civil Rights describes their position on illegal immigration as “…to promote immigrant integration, to provide a pathway to citizenship for long-time resident immigrants, and to recognize the tremendous contribution of all immigrants to the United States.”

The organization has also previously called increased border security measures “dangerous and unnecessary” and said S. 744, the “Gang of Eight” bill introduced by Democrat New York Sen. Charles Schumer was amended to “expand border enforcement in ways that are unnecessary, extraordinarily expensive, and detrimental to the rights of immigrants and citizens alike.”