MSNBC contributor and Daily Beast blogger Eleanor Clift desperately wanted to get herself on Hillary Clinton campaign chairman John Podesta‘s radar in the spring of 2015.

After all, in a 2008 first-person story for Newsweek, she admits that she so enamored with Clinton that her nickname was “Eleanor Rodham Clift.” She wrote that Clinton even feared that Clift would suffer a consequence for her “sister solidarity.” In the piece she questioned some of Clinton’s campaign tactics toward then presidential candidate Sen. Barack Obama (D-Ill.). She also wondered if she was being “too tough” on her.

So come on. Where was her Podesta dinner invitation? Hadn’t she paid her dues?

The 76-year-old journalist who spent 50 years at Newsweek and a lot of years as a panelist on the late John McLaughlin‘s shoutfest of a show was clearly miffed that she hadn’t been invited to some of the cozy dinners Podesta held for handpicked journalists in Washington and Manhattan.

In April of 2015, Clift wrote Podesta a very #ThisTown note pushing him to be more inclusive toward her and The Daily Beast‘s now Washington Bureau Chief Jackie Kucinich.

She even tries to appeal to the foodie in Podesta by mentioning a special pasta dish with walnut sauce.

The opening line is classic.

“Hi John, I completely understand why dinner at your home did not include someone like me, who’s a known quantity to Clinton campaign veterans. But I wanted to make an appeal for an early opportunity to get myself and the Daily Beast Political editor, Jackie Kucinich, on your radar so I/we can write and report knowledgeably. There’s a long campaign ahead, and I’d like to establish a line of communications. Is there an assistant I should go through? I look forward to working with you (and maybe getting some of that pasta and walnut sauce dish!!) All best, Eleanor.” 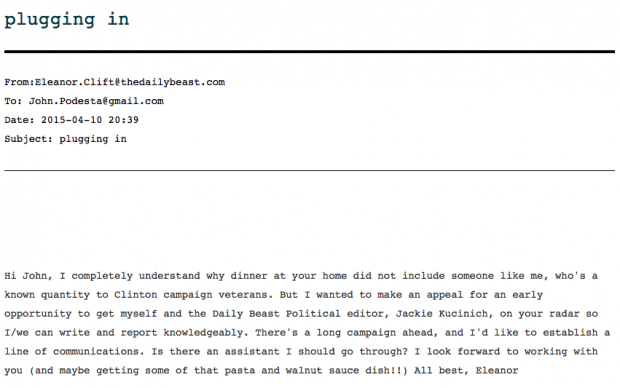