Readers may not give two shits about this, but it’s election day and there’s sewage leaking into Politico‘s newsroom.

In other words, Politico is literally FULL OF CRAP.

Is this just a sick coincidence?

The Mirror sought guidance on the matter from Politico Spokesman Brad Dayspring.

“Happy election day, 2016,” he replied to The Mirror. “It’s small leak thankfully confined to a supply closet that is away from the newsroom (and actual people). Sorry to disappoint the folks at the DC and late night hosts!” 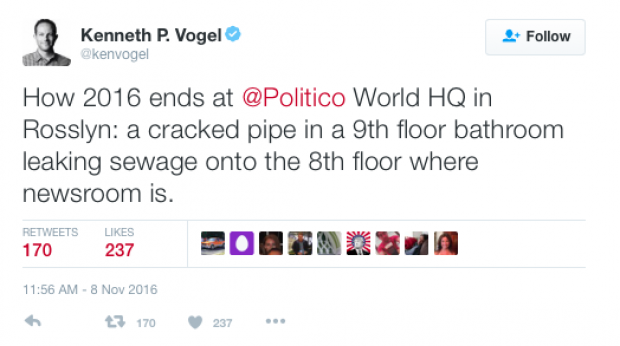 It’s unclear if ex-Politico employee Laura McGann, now at Vox, was joking, but she thanked Vogel for his help with the grease fire.

It appears Politicos have a sense of humor about the whole shitty ordeal.

Politico has never had a sewage problem. But it has had a periodic rodent issue that management has not chosen to address so quickly. Hopefully they don’t have the same attitude toward sewage that they do small furry animals.

A Washington journalist asked me, “Did Charles Johnson stop by recently?”

I for one really hope Dayspring is coming completely clean with us about this.

Really, I can only take so much bullshit in one day.