A class action lawsuit filed in California last week accuses Facebook of violating key civil rights laws after it was discovered that the social media company has a feature that allows advertisers to target users by race and ethnicity.

Facebook has a self-service advertising page, which offers many different marketing functions. One of the features allows for advertisers to “EXCLUDE people” and “Narrow Audience” for specific demographics, like “Ethnic Affinity.” 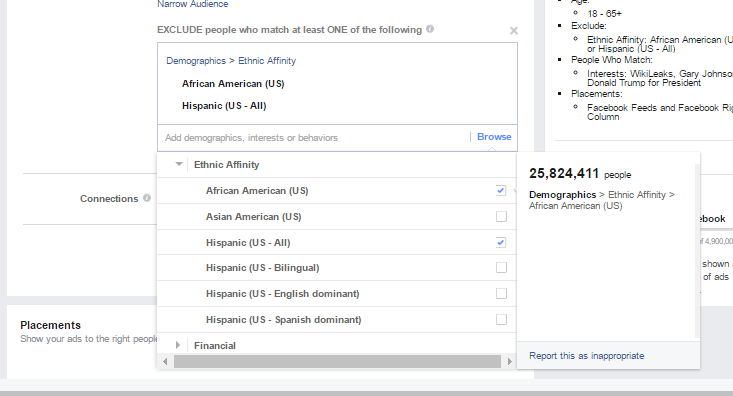 The lawsuit contends that this is a direct violation of Title VII of the Civil Rights Act of 1964 and the Fair Housing Act. (RELATED: PA Mayor Urged To Resign After Facebook Posts Show Obama, Apes, And Lynching)

“Printing or publication of notices or advertisements indicating prohibited preference, limitation, specification, or discrimination; occupational qualification exception,” is an unlawful employment practice, according to Section 704 of Title VII.

The lawsuit specifically lists several minority plaintiffs who have been seeking housing and employment through Facebook advertisements. The legal complaint states that these people have been struggling to find jobs and homes because of the discriminatory practices.

Christian Martinez, Head of Multicultural at Facebook, posted an official blog post explaining how if the company finds something discriminatory in advertising, it “will take aggressive enforcement action.”

“We need to enable everyone to see the content that’s most relevant to them — and work to encourage everyone to embrace, not suppress, the diversity that makes our community great,” the post continues.

He says Facebook is committed to removing ads from the platform if the government agency responsible for enforcing discrimination law notifies the company.

“But no user can tell whether they are subject to illegal discrimination, because the discrimination occurs with the ads they do not see. As a result, the problem will not be remedied unless Facebook is forced to take additional action,” the authors of the lawsuit argue.

The plaintiffs clarify that they are not trying to end Facebook’s Ad Platform, “nor even to get rid of the ‘Exclude People’ mechanism.”