Clifford Nyambe Mayeya smiles as he demonstrates how his new maize mill works. Three of his seven children sit close by, captivated by the machine. He bought it earlier this year using savings he earned from tobacco farming and is now a burgeoning entrepreneur.

By charging neighbors from his village in the Western Province of Zambia a few cents to grind their maize into white cornmeal for nshima, the bland, polenta-like local food staple, he plans to buy more mobile solar panels to bring power to his home and maybe even a new motorcycle for his family.

During the meeting of World Health Organization’s tobacco control treaty, the Framework Convention on Tobacco Control (FCTC) Conference of the Parties, delegates from 180 nations will consider international rules including tax increases, heavy product regulations and other policies intended to limit tobacco consumption, as well as production.

The scourge of tobacco use has been well-documented. More than 5 million people die each year from tobacco-related deaths, and health care expenditures and productivity losses approach $500 billion annually worldwide. But for tobacco growers, approaches by well-meaning international bodies threaten to eliminate the top cash crop from some of the most economically challenged areas on Earth.

At the 2014 Conference of the Parties, WHO Director General Margaret Chan went so far as to suggest that it was her goal to put every tobacco farmer out of business. As a result, some farmers may soon have to fight for their livelihoods and even the lives of their families.

For Mayeya, growing tobacco means the difference between struggling to feed his family and having food, clothing and shelter, and enough money left over to send his children to school.

In the region where Mayeya lives, farmers who don’t grow tobacco struggle to earn $500 a year, while many tobacco farmers earn 10 times that amount.

That extra income is vitally important in Zambia, where school is free for students until the 7th grade, but costs 6,200 Zambian Kwacha — roughly $630 — per child per year beginning in 8th grade. Because of the money he earns from tobacco, all of Mayeya’s children will complete secondary school — quite a feat in Zambia where just 8 percent of the population completes 12th grade and only 3 in 5 of the country’s adults are literate. 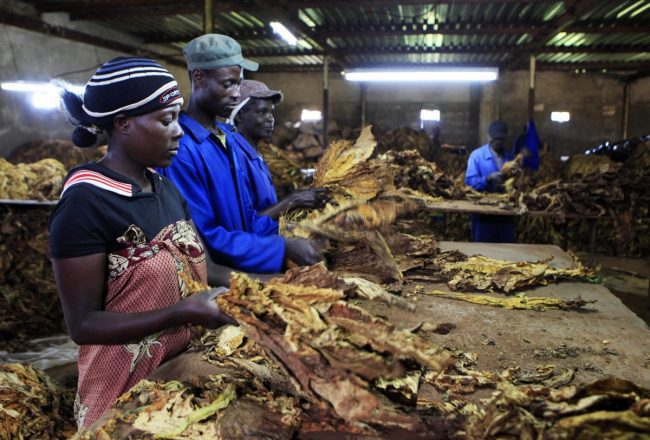 Farm workers sort tobacco leaves at a farm ahead of the tobacco selling season in Harare March 3, 2015. REUTERS/Philimon Bulawayo

“I don’t want my children to be farmers,” Mayeya said. “I send them to school because I want them to be teachers and policemen and in government.”

An hour’s drive away down dusty, rutted dirt roads lives Njumbu Chitumbo, a tobacco farmer who cares for 23 children, who echoed Mayeya’s words. “None of my children work in tobacco. I work in tobacco so they can have a better life,” Chitumbo said as guineas pecked the ground around him.

“Growing tobacco gives me something I can achieve. I’ve managed to buy animals. We’ve even managed to build a house. I’ve been able to send my children to school.” Chitumbo earned $5,600 last year growing tobacco, a princely sum in western Zambia.

In addition to tobacco, Chitumbo rotates sweet potatoes, maize and ground nuts through his 1.5 hectare farm. “But I couldn’t make a living on those other crops. I have to have tobacco,” he said as he pointed to a tobacco drying barn in the distance.

When Doing Good Is Not Allowed

Chief Chanje III, who oversees the chiefdom of Rukuzye Ward near Chipata, in Zambia’s Eastern Province, said his 300 villages “have benefitted a lot from tobacco.”

If international do-gooders manage to kill demand for tobacco without an adequate replacement crop, “a lot of people will suffer,” Chanje said. “A lot of school children wouldn’t be able to go to school. A lot of people wouldn’t get health care.”

“Tobacco is the only crop that allows us to survive. Boreholes [to provide clean drinking water], schools, clinics, solar panels for electricity and teachers are all possible because of growing tobacco.”

Chanje credits tobacco companies for taking an interest in helping his community when nongovernmental organizations wouldn’t.

One company, for example, built several schools and clinics to serve communities where many farmers live.

This type of corporate social responsibility by the tobacco industry is condemned by the WHO’s anti-tobacco agency. According to FCTC guidelines, countries should “denormalize and, to the extent possible, regulate activities described as ‘socially responsible.'”

“The tobacco industry,” the agency argues in a briefing paper to member nations, “conducts activities described as socially responsible to distance its image from the lethal nature of the product it produces.”

“The corporate social responsibility of the tobacco industry is, according to WHO, an inherent contradiction,” the tobacco control treaty claims.

Contradiction or not, impoverished farming communities have access to clean water, health care and education because of tobacco companies, said Munukayumbwa Munukayumbwa, the head teacher of a school in Kaoma in the Western Province.

One of Chief Chanje’s subjects, Grace Beeler, sees tobacco not as a scourge, but as a salvation. “Tobacco removes poverty,” she said. Beeler should know. She went from nothing but a small farm 12 years ago to owning four homes and a small grocery store today — all of which were purchased with income from growing tobacco.

Upon being told that the WHO and other intergovernmental and nongovernmental bodies wanted to eliminate tobacco farming, Beeler shook her head and said, “No man with humanity in him would keep me from growing tobacco.”

Still the delegates to the WHO’s tobacco control treaty want to do just that.

The Framework Convention on Tobacco Control calls for the elimination of tobacco use, but also attempts to soften the blow on tobacco farmers by promoting “economically viable alternatives for tobacco workers, growers and, as the case may be, individual sellers.”

For Zambia’s tobacco farmers, however, these efforts have proven little more than lip service. FCTC Conference of the Parties delegates have recommended tobacco farmers plant crops such as yams or paprika instead of tobacco, but these alternatives fall woefully short of being able to match tobacco’s income potential.

“Farmers aren’t stupid,” said Chipata District Commissioner Kalunga Zulu. “If a farmer could make more growing something besides tobacco, he would grow that plant instead.”

Zulu, who serves as the top political appointee in the region functioning as a liaison between the national and local governments, said it is easy for bureaucrats who work for organizations like the WHO to “sit in Geneva or New York and tell us how to live, but they don’t understand the harm they can cause. We lack other options.”

Msamide Bands, a father of six who has farmed tobacco for nearly a decade in a small village outside of Chipata agreed. “We have no alternative crops that can compare to tobacco in terms of money,” Bands said, tugging at the collar of his purple soccer jersey.

“To stop us from growing tobacco would be the same as just to kill us.”