The Daily Caller attended the Chicago edition of Marxism Day School on Saturday — a nationwide, all-day event with communist catechisms scheduled in eight cities around the country.

The dour confab — full of dour people in especially dour moods — took place on the downtown campus of DePaul University. The sponsor was the International Socialist Organization, which bills itself as “a revolutionary socialist alternative.”

The prevailing question of the day, which would hang like a menacing cloud over the proceedings, was: How is it possible that white working-class people could have abandoned the Democratic Party — not to mention the wackadoodle Marxist fringe — and instead have supported the rhetoric spouted by 2016 presidential election winner Donald Trump. 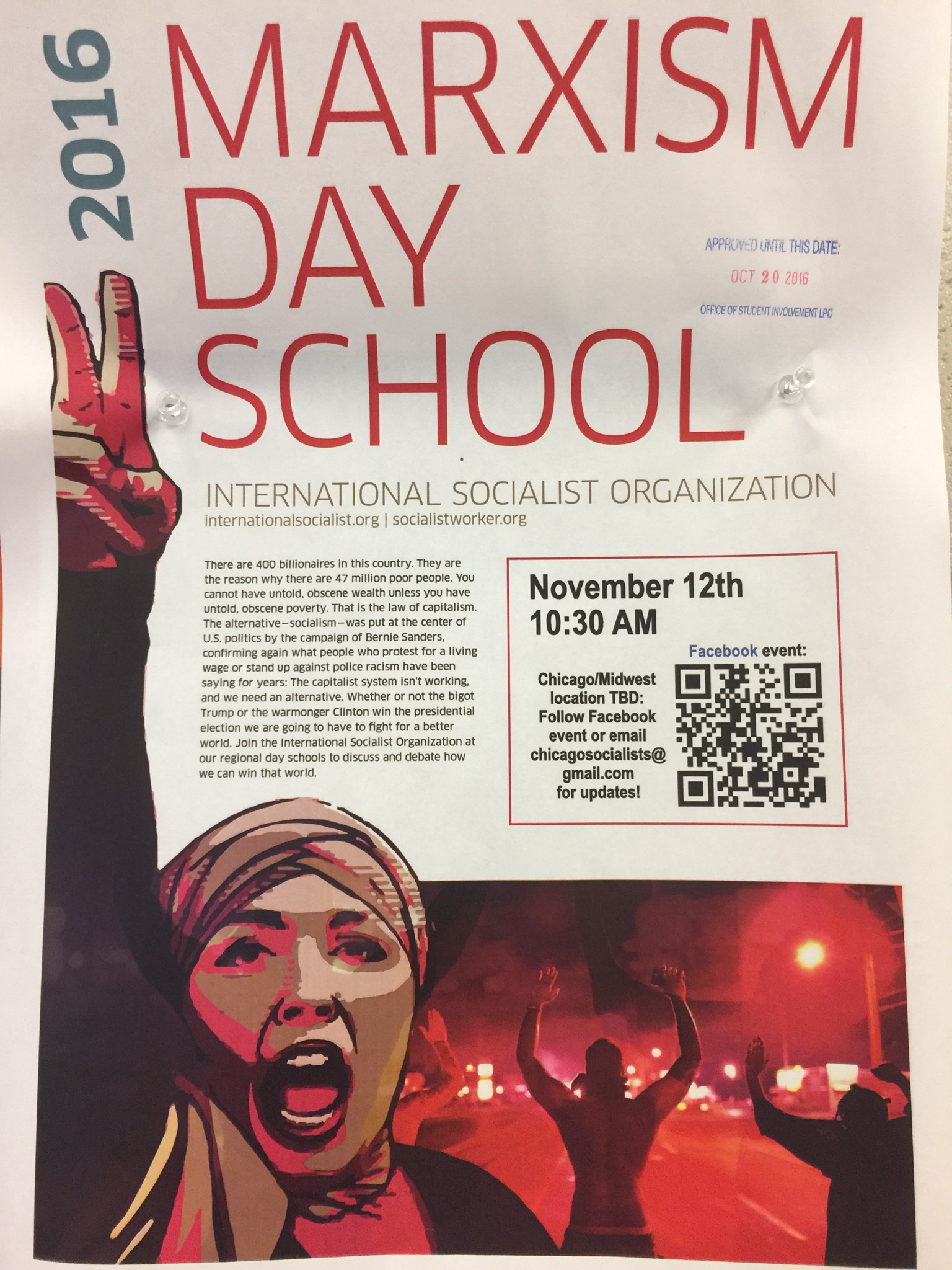 The vanguard of attendees struggled mightily to get their heads around the vexing new political facts before it.

But let’s not get ahead of ourselves. The first step on TheDC’s furtive Marxist expedition was registration. This process involved borrowing a helpful organizer’s very sleek iPhone to use a credit card — and financing from a huge multinational investment bank — to access Eventbrite.com, an online ticketing tool (which has raised at least $140 million in venture capital).

The registration table was filled with books on Marxism, socialism and various revolutionary activity. The atmosphere was relaxed. One organizer was telling another organizer about how he hopes “there is a coffee shop nearby” the new, bigger apartment he hopes to rent.

Next, the 90 or so attendees — that’s a generous estimate — straggled into a large classroom. It was an extraordinarily white crowd. Perhaps half the audience also brought Starbucks cups full of high-priced beverages. As they sat down at the rows of desks, some attendees opened up expensive laptop computers.

Eventually, Marxism Day School got off to a rather uninspiring start.

In any case, “the crisis is just beginning,” she said. “We are reeling from it.” Saturday’s small convention of hardcore socialists would be part of a “collective struggle to find some answers.”

After a few minutes of platitudes — there are more rich people than poor people, the birth of “a new world really requires building a new left resistance,” that sort of thing — Roberts regaled the audience about her recent trip to “Kentucky coal country” — Harlan County to be exact.

The big-city Marxist explained that she was surprised to see few Confederate flags flying in the rural Kentucky county. She expected to see gobs of them, she said. She was also overjoyed to see an occasional yard sign endorsing Bernie Sanders.

Sadly, Roberts claimed, the residents of Harlan County — 96 percent white — ended up voting for Trump by a margin of 89 percent.

How could this be?

There was a brief break at this point. Roberts, the dedicated Marxist teacher, left the classroom building during this break and ventured into Chicago’s competitive food-and-beverage marketplace to purchase what appeared to be a grande-size iced coffee from Starbucks.

Next were a pair of concurrent workshops. TheDC couldn’t decide which one to attend, but went with “Race, Class and Capitalism” because it was more crowded.

The speaker was Eric Kerl, a member of the International Socialist Review Journal’s editorial board, “a printer by trade,” and a guy who really likes to hurl insults containing the word “turd” on Twitter.

Kerl is short, well-tattooed and nearly as white as a person can possibly be.

Kerl enthusiastically quoted Karl Marx and Vladimir Lenin at length throughout his presentation the way a traveling evangelist quotes Paul of Tarsus in the Acts of the Apostles.

As he stood in front of the audience in his grunge-era plaid shirt and his white Nike shoes, Kerl worked mightily to tie capitalism to what he described as pervasive racism promoted by unseen — but ultra-powerful — capitalist forces.

Racism, sexism and the oppression of gay and transgender people are directly related to a perpetual economic class struggle, he said. Skin color and sexuality are part and parcel of a slew of economic horrors inflicted at the hands of capitalist masters. Thus, all workers should unite together for “mass struggle” and “protests in the streets.”

Young white students should be in league with the Black Lives Matter movement. Blue-collar white people should “build solidarity” and join “the fight for socialism and to overthrow capitalism.” The -isms are all interconnected, see. The “ruling class” has purposefully instituted these various “-isms” to keep the people downtrodden.

So on and so forth, Kerl spoke. On and on he droned.

The real fun during Kerl’s “Race, Class and Capitalism” workshop was the “stack session” which followed it.

Ordinarily, at events attended by normal people, presentations tend to be followed by question-and-answer sessions. Audience members ask questions, or occasionally make comments, and the speaker responds. (You are probably familiar.)

“If you have a question, raise a fist,” the “stack session” manager said.

No fists were raised. Not one single person in attendance asked a question. Instead, at Marxism Day School, there was a lengthy, tedious period of general murmuring. Audience member after audience member proceeded to spew opinions into the void.

Like Roberts and Kerl before them, the audience members, despite proudly believing they aren’t themselves racists, simply could not summon the ability to think beyond categories of race — and gender, and sexuality and, especially, class. They couldn’t bear to contemplate that it might be something other than a teeming throng of -isms that divides working-class people.

A white guy in a gray sweater from Indiana flatly claimed during his monologue that a majority of white working-class voters did not vote for Trump. Also, he claimed, Trump voters enjoy higher incomes than Clinton voters. He described rural white areas of the United States as “ghettos.” He urged everyone to adopt “a white rural strategy” to build class solidarity.

A white woman with curly hair expressed a confusing range of emotions. “We will be on the defensive for four years and we have to keep people from getting killed in mobs and stuff,” she said. “It’s an exciting time.”

A white guy wearing thick black glasses and a Mario Bros. t-shirt suggested that “potluck dinners” would be an excellent way to “build solidarity” during this trying time. He also referred to fellow Marxist Day School attendees as “comrades.”

A viscerally angry, white-haired white guy stood up to announce that Marxists may need to get violent with Trump voters. “We may have to punch their heads in.” He noted his belief that 43 percent of union households voted for Trump. Many Chicago police officers and firefighters voted for Trump, he said. He called the cops and firemen “white racists” for doing so. He was a hit. He received a smattering of applause when he sat down.

A second white guy with a beard asserted that many people who say they are on the American left only “present themselves as on the left.” They’re a bunch of poseurs, though. Take Garrison Keillor. The famous Minnesota Public Radio personality isn’t really a leftist. No, no. He — and others — are “really just self-centered pricks.”

A white woman with a butch haircut and a raft of tattoos asserted that “the ruling class has a joint agenda to oppress black and white workers.” She blamed Bill Clinton for ushering in racist, capitalist policies during his presidency.

A white guy named Bill from Madison, Wisconsin sagely observed that “the real reason Democrats lost the election is the collapse in their vote.”

A white woman with her brown hair dyed blond at the ends proclaimed in no uncertain terms that she would definitely not be speaking to any Trump voters. “We don’t have time for that,” she said. Radical leftists should only talk with each other, she urged. She also said she wants “racist killer cops to pay for their crimes.” She was holding an infant baby in her arms.

Roberts, the introductory speaker, chimed in near the end with an admission that “a significant proportion of white, working-class people voted for Trump.” She had chugged down roughly half of her grande Starbucks drink by this point.

The “stack session” mercifully ended and the group broke for lunch. A second set of workshops was to follow, and then a discussion entitled “Why we need a Revolutionary Party.”

But, frankly, TheDC had experienced its fill of Marxist Day School by that point.

1
Philadelphia Gun Shop Owner Shoots, Kills Looter Who Broke Into Store With Group
US
2
New York Times Writer Claims Property Destruction Is 'Not Violence'
Politics
3
'Mommy And Daddy' Escort 'Antifa Kid' Suspected Of Kicking Off Riot To Turn Himself In
US
4
Looters Argue With Armed Store Owners 'About Why They Can't Break In' On Live TV
US
5
STONE: Now That I'm Ungagged, I'd Like To Say A Few Things About My Prosecution
Opinion