CNN, The Los Angeles Times, The Washington Post, and The New York Times all devoted front-page coverage Monday afternoon to the idea that President-elect Donald Trump’s chief strategist and senior counselor Steve Bannon has been accused of supporting white nationalism.

The Huffington Post in fact ran with headlines calling Bannon a “white nationalist” and an “anti-Semite.” Politico wrote, “Fear rises that Bannon could bring the ‘alt-right’ into White House.”

The Politico story said, “Before joining Trump’s campaign as its CEO in August, Bannon served as executive chairman of Breitbart News, identifying his outlet this summer as ‘the platform for the alt-right,’ a group known for white-nationalist and anti-Semitic politics.”

Two prominent alt right writers, however, think this narrative by major outlets will end up benefiting white nationalists and the alt right. Alexander Hart, an alt right writer at VDare, told The Daily Caller: “Bannon and Trump are not typical Republicans, but they are not ‘white nationalists’ or ‘Alt right’ by any stretch of the definition. Calling anyone some of the most powerful people in the country ‘Alt Right’ for merely supporting immigration enforcement and reduction only makes the label seem more mainstream.” 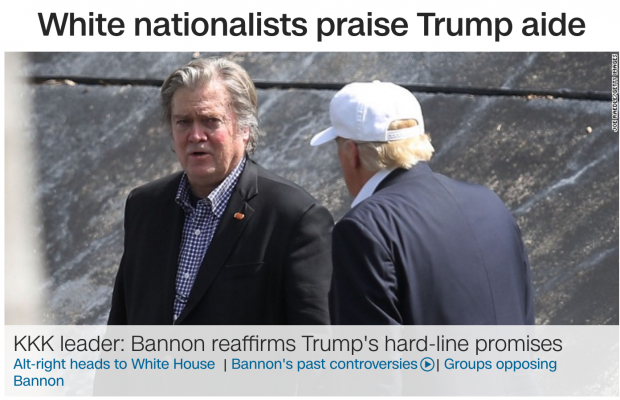 But what about Bannon calling Breitbart a platform for the alt right? Hart said: “The term ‘alt right’ is nebulous, sometimes encompassing everyone from neo-Nazis at the Daily Stormer to more moderate white advocates at American Renaissance, to people who simply oppose immigration and political correctness and like to post Pepe memes. Other than its comment section (which very well could have been all Bannon meant), Brietbart only fits the latter category.”

Gregory Hood, an alt right author who fits under the white nationalist category, also agrees with Hart that calling Bannon and Trump racists benefits the extreme-right. In a chapter called “How to Destroy the Republican Party” in Hood’s book “Waking Up From The American Dream,” he wrote, “George Lincoln Rockwell often spoke about ‘political jujitsu,’ using the very power of the controlled media to his advantage.”

Hood then went on to say, “We want to increase media criticism of Obama’s opponents as racists.” This is something that Hood wrote “is simply a tactic.” The reason for this from a white nationalist perspective is “We want to increase the reliance of the Republican Party on white voters, so it is harder and harder for them to ignore or betray white interests.”

1
'Closer To Animals': Nick Cannon Goes On Racist, Anti-Semitic Rant, Says 'White People' And Jewish People Are 'The True Savages'
US
2
FBI Had To Chase Maxwell Around New Hampshire Hideaway, Discovered Cell Phone Wrapped In Tinfoil
Politics
3
Black Lives Matter And All Lives Matter Protests Clash In Front Of Trump Tower
US
4
Brit Hume Mocks Democrats For 'Getting On The Fainting Couch' Over Stone Commutation
Politics
5
Police Officer Allegedly Killed Other Officer After Threatening To Shoot Protesters In Similar Manner
US