“I know I shouldn’t be surprised anymore but man this is a mess.”

“I just burned the shit out of three fingertips on my left hand while cooking so I’m done with life now thanks.” — Hayes Brown, World News Editor, BuzzFeed News.

Sayonara to Bloomberg TV’s “With All Due Respect”… read here. 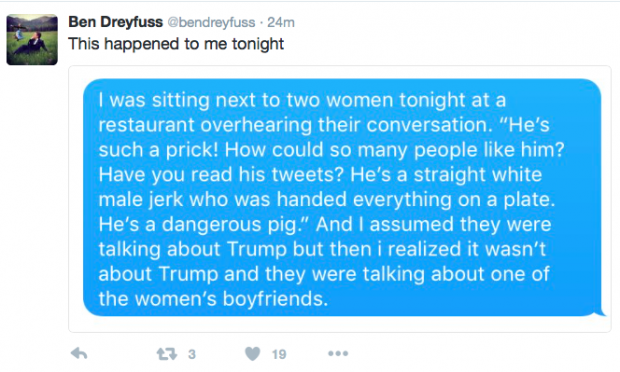 “It was one of those things we just looked at each other, what the hell is going on?” — CNN’s Jim Acosta, reflecting on the 2016 presidential election on “AC360” Thursday night.

“I’m generally of the opinion that non-crazy Repubs now have an obligation to try to get their hands on jobs like sec of state.” — BuzzFeed political reporter McKay Coppins.

“@BernieSanders suggested last night he might have won against Trump hasn’t had a private conversation with @HillaryClinton since she lost.” — Andrea Mitchell, NBC.

“You idiots in the media don’t own him. You were jerks to him. Hope he always leaves you by the curb.” — Former Rep. Steve Stockman (R-Texas) on Trump ditching the media and eating at 21 this week.

“Folks if it WALKS like a duck. And quacks like a duck. It’s a damn duck. All the ‘racists’ surrounding President-Elect Trump is a duck.” — Sophia Nelson, motivational author, blogger.

“Let’s just deport @JohnDePetroshow! John: whatever is up your ass, call AAA and have it removed. No respect for dicks.” — Montel Williams, Twitter dweller and former talk show host. John DePetro is a radio host on WPRO.

A note on Gwen Ifill

“My hope: the Flynn thing is a trial balloon so it can be shot down but Trump can still say ‘hey man I tried.'” — Seth Mandel, op-ed editor, New York Post.

“Having an important breakfast tomorrow as the next stop in my Unemployed-But-Plotting-Greatness Tour. Lots of well-to-do people enjoyed my Hillary articles!” — Patrick Howley, who recently resigned from Breitbart News.

“Treating racism and bigotry as just another opposing view. That’s normalizing. I’ve seen this from reporters with increased frequency since Bannon’s appointment. It’s not partisan to object the objectively objectionable. It’s actually part of your goddamn job.” — Olivia Nuzzi, The Daily Beast.

NYT‘s Charles Blow lashes out at Megyn Kelly (Note to Blow: Her name is spelled like this.)

“Why aren’t more ppl aghast that Megan Kelly sat on all these accusations abt Team Trump until after voters couldn’t consider them?! #BadBiz.” — NYT lefty columnist Charles Blow.

Note: Craig Gordon is the new Executive Editor of Bloomberg DC. He was previously managing editor.

“@SenFranken is on the Senate floor with a poster filled with Breitbart headlines.” — Burgess Everett, Politico congressional reporter.

Don Dr. thought this was funny 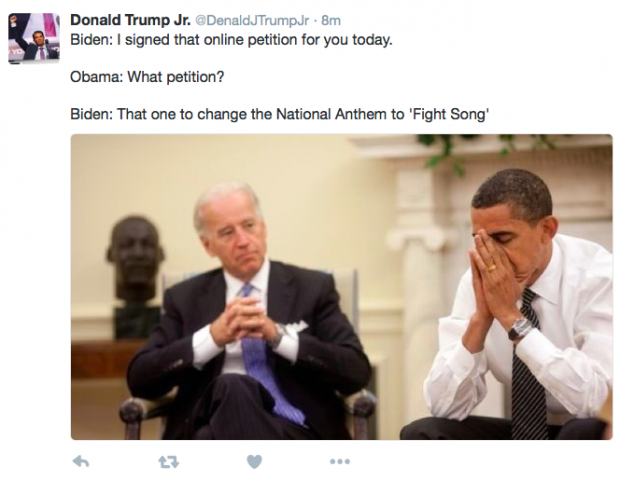