And then there’s Naked Cowboy.

Robert John Burck (his real name) is a fixture in Times Square in underwear, cowboy boots and a hat.

In a recent interview with America One News‘ Emily Miller, Cowboy, who formally endorsed President-elect Donald Trump, said he would soon move his operation to Washington when Trump possibly moves into the White House.

“I’m going to move to Washington, D.C., get my underwear and play in front of the White House everyday,” Cowboy told One America News.

For now, he’s putting in ass time at Trump Tower.

These pictures are from Trump transition pooler John Stanton, a senior political writer at BuzzFeed, who wrote that Cowboy “flashed the ass of his Trump branded underpants” in the lobby.

Cowboy doesn’t mess around. He charges $499 to officiate a wedding and $1000 for a celebrity appearance in the Big Apple. For appearances elsewhere, it’s $5,0000 day plus business/first class travel and accommodations for two.

Below is a brief glimpse of his tighty whities. 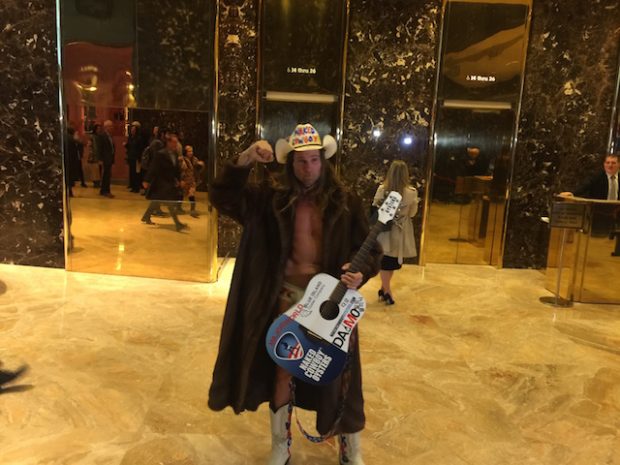