Over 5.3 billion records were lost or stolen during data breaches over the past three years, according to the Breach Level Index. A mere 4% of those hacks were considered “secure breaches” in which the stolen data was encrypted and rendered useless for hackers.

Those bleak numbers indicate that demand for cybersecurity solutions will likely surge over the next few years. Research firm Markets and Markets believes that the cybersecurity market will grow from $122.5 billion in 2016 to $202.4 billion in 2021. 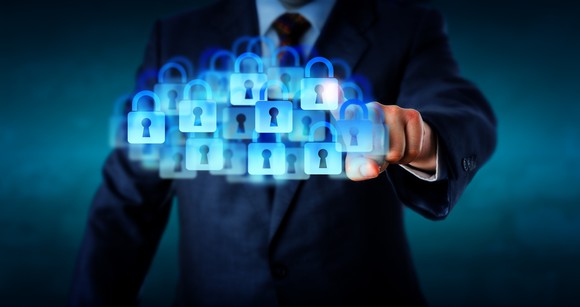 Despite that bullish forecast, many cybersecurity stocks slumped over the past year due to slower enterprise spending, tougher competition, and concerns about their profitability and valuations. But if we look closer, we can identity a few “best in breed” players which could rebound strongly in the future.

Symantec (NASDAQ: SYMC), best known as the maker of Norton Antivirus, became an 800-pound gorilla in the cybersecurity industry with its recent acquisitions of Blue Coat and LifeLock. BlueCoat offers security solutions for networks and cloud services, while LifeLock shields users from identity theft.

Both businesses complement Symantec’s core security products for PCs, data centers, and emails, and enable it to offer well-diversified “end-to-end” bundles, which would typically require multiple subscriptions with separate vendors. The company is widely expected to continue expanding that ecosystem with additional acquisitions.

Check Point (NASDAQ: CHKP) is best known for its ZoneAlarm firewall and antivirus products. Unlike its rival Palo Alto Networks which primarily serves larger businesses, Check Point sells its products to small and medium-sized businesses and individual customers. Its customer base includes over 100,000 businesses and millions of users worldwide.

Palo Alto’s double-digit sales growth makes it a more exciting pick than Check Point, which is expected to post just 6% sales growth this year. However, Check Point is profitable by both non-GAAP and GAAP metrics, while Palo Alto’s GAAP loss widened last year — partly because it spends much more money on its stock-based compensation expenses than Check Point.

FireEye (NASDAQ: FEYE) recognizes and thwarts cyberattacks with threat prevention tools before they breach network perimeters. It serves over 5,000 customers across 67 countries, including nearly half the Forbes Global 2000. Its stock plunged more than 40% over the past 12 months due to its slowing sales growth and executive shakeups.

However, FireEye’s recent layoffs, its cost-cutting initiatives and its replacement of on-site appliances with cloud services yielded a surprising top line beat and a narrower-than-expected loss last quarter. There’s still plenty of work to be done, but FireEye’s progress is encouraging, and its P/S ratio of 3.3 is the lowest of all the stocks on this list — indicating that it remains a cheap takeover target for potential suitors.

CyberArk (NASDAQ: CYBR) is the market leader in PAM (privileged account management) solutions, which counter internal threats like careless or disgruntled employees. When an internal data breach is detected, CyberArk’s system locks down the affected computer and quarantines it from the rest of the network. A report from Intel Security last September revealed that a whopping 43% of all data breaches were caused internally.

CyberArk serves about 2,800 businesses worldwide, including 45% of the Fortune 100 and over 25% of the Global 2000. Robust demand for better internal controls boosted CyberArk’s revenue 56% last year, and the company expects another 33%-34% growth this year. Like Check Point (which reportedly tried to acquire it earlier this year), CyberArk is also profitable by both non-GAAP and GAAP measures.

Imperva (NYSE: IMPV) is the market leader in the niche market of web application firewalls (WAFs), which protect individual apps (instead of entire devices or operating systems) from targeted attacks. Sandler Research estimates that this market could grow at a compound annual growth rate of 17.3% between 2014 and 2019.

However, Imperva stock cratered more than 45% over the past 12 months due to longer sales cycles and smaller purchases slowing down its sales growth. Analysts expect Imperva’s sales to rise just 9% this year, compared to 43% growth in 2015.

That slowdown convinced Imperva to try to sell itself. Cisco and IBM have both reportedly expressed interest, indicating that Imperva could be bought out at a nice premium in the near future.

These five companies all represent very different ways to invest in the cybersecurity market. Symantec and Check Point are clearly more conservative plays, FireEye is a potential turnaround play, CyberArk is a growing leader in a niche market, and Imperva is a potential buyout play. Therefore, investors should do their due diligence to see which hacker-busting company best suits their investment goals.

Forget the 2016 Election: 10 stocks we like better than Symantec
Donald Trump was just elected president, and volatility is up. But here’s why you should ignore the election:

David and Tom just revealed what they believe are the ten best stocks for investors to buy right now… and Symantec wasn’t one of them! That’s right — they think these 10 stocks are even better buys.

1
Trump Supporter Slapped In The Face During Fight At Black Lives Matter Plaza
Video
2
JONES: I Am Black And I Am A Democrat. But 'I Ain't' Voting For Joe Biden This November
Opinion
3
Tammy Duckworth Is ‘A Fraud’: Tucker Carlson Blasts Democratic Senator
Politics
4
Fox News Says It 'Mistakenly Eliminated' Trump From Photo With Epstein, Maxwell
Media
5
This Name Is A Strong Contender To Replace The Washington Redskins. Will Fans Like It?
Editorial