The Daily Caller News Foundation recently reported on columns Minnesota Rep. Ellison wrote under a pen name while in law school. In one of them he called for a black state in southeastern American states.

Under the name Keith E. Hakim, Ellison wrote: “Finally, blacks would have the option of choosing their own land base or remaining in the United States. Since black people toiled most diligently in the southeastern section of the United States, this land, quite naturally, would be most suitable. That means Arkansas, Alabama, Georgia, Louisiana and Mississippi. Blacks, of course, would not be compelled to move to the black state, and, of course, peaceful whites would not be compelled to move away.”

The Daily Caller reached out to Ellison’s office to ask if he still believes in these ideas and received no response. TheDC showed or read to multiple black Democrat congressmen this quote from Ellison and asked them what they thought about it.

Georgia Rep. Hank Johnson said: “I don’t see anything really objectionable. What he apparently proposed was a partitioning of the United States into a southeastern section.”

When asked if what Rep. Ellison proposed was black nationalism, Johnson said, “I don’t know what to call it. It seems to have been born out of academia, a thoughtful discussion on possibilities.”

“These are not ideas that have not been discussed by black folks throughout history,” Johnson added. The Georgia congressman said that while he is not in support of these ideas now, “there was a time when I would have been.” Johnson told TheDC that time was when he is college. 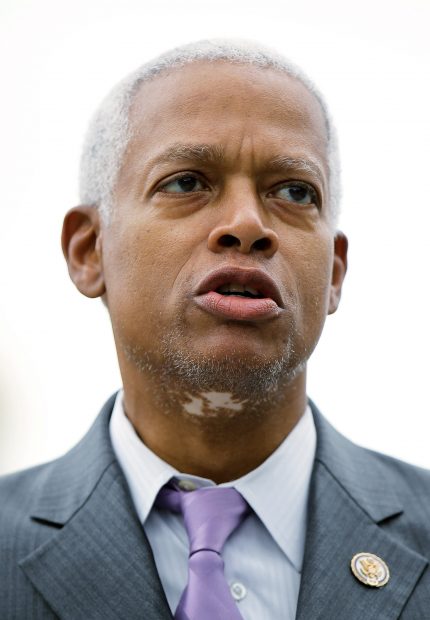 Other congressmen were not as outspoken as Johnson about Ellison’s past writing. Georgia Rep. John Lewis said: “I don’t know what condition he wrote it in, so it’d be hard for me to comment. But many years ago there was other groups suggesting that there was some part of America that would be like a homeland or a state or something.”

The Georgia Democrat said he wouldn’t comment on whether Ellison would have to denounce these comments. While Rep. Lewis said previous groups espoused similar ideas for a black state, the New Black Panther Party currently supports it.

The group’s co-leader proposed an idea very similar to Ellison’s. He said that African-Americans should claim a “black nation” in “Louisiana, Mississippi, South Carolina, Alabama, and Georgia.” Ellison’s black state would be in Arkansas, Alabama, Georgia, Louisiana and Mississippi.

Other black Democratic congressmen TheDC spoke to at the nation’s capitol refused to comment on Ellison’s writing. Mississippi Rep. Bennie Thompson said he would need to read the whole article by Ellison before he could comment, as the two paragraphs calling for a black state could have been taken out of context.

TheDC read out Ellison’s writing to Congressional Black Caucus chairman North Carolina Rep. G.K. Butterfield as he walked to his car. Butterfield responded, “I have to find out if he said it. It doesn’t sound like Keith Ellison to me.” TheDC informed Rep. Butterfield that it was indeed Ellison who wrote the column, Butterfield then said he had to go and climbed into his car.