One of this morning’s presenters was Bill Galston of the Brookings Institution, who spoke on “Religious Voters in the 2016 Election.”

Without a doubt, the most stunning data he provided had to do with a dramatic shift in the percent of Americans “who say an elected official who commits an immoral act in their personal life can still behave ethically and fulfill their duties in their public and professional life.” 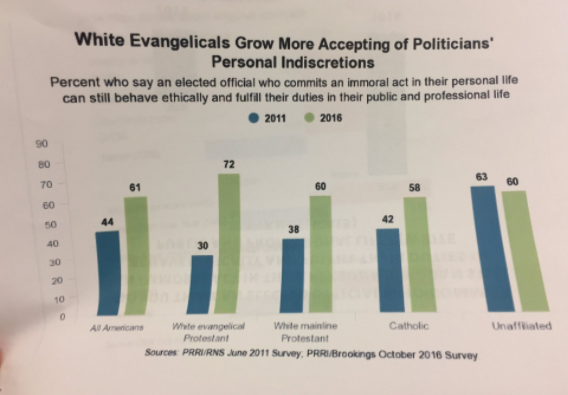 Since 2011, all Americans have shifted on this question — but (by far) the biggest change came from white evangelicals.

Obviously, a lot of this has to do with retrofitting values to justify support for Trump. But while much of it is likely an ex post facto justification, I wonder how much is also an organic shift toward secularism and tolerance — and away from traditional values.

I’m not sure which option should trouble conservatives most.