When the call went out to save the republic, Elaine was too busy working. Jerry didn’t care. And Kramer… well, let’s just say they didn’t ask Kramer.

But George answered the call. He comes from a long line of quitters, but he listened to his instincts and did the opposite. And now he’s got something to say:

This heartfelt, utterly sincere, and “recently understood” plea was brought to you by our radical leftist friends at Unite for America. Because undermining the legitimacy of an American election is suddenly good again, now that Hillary Clinton has lost.

Unite for America has been very busy lately. In addition to bringing George Costanza out of retirement, they also trotted out Jed Bartlet and Hot Lips Houlihan to beg Republican electors for mercy. And now, they’ve targeted at least one Republican elector by name.

In a video posted to the Youtube account of a group called Unite for America, [Martin, father of Charlie] Sheen is seen begging a Republican elector he calls “Mr. Ashley McMillan” to dump Trump when electors cast their final vote for president on Monday…

The only problem: “Mr. McMillan” is actually a woman. Ashley McMillan — whose married name is Ashley McMillan Hutchinson — serves as vice chair of the Kansas Republican party.

If you have any doubt about Mrs. Hutchinson’s gender, here’s a photo (courtesy of the Kansas GOP): 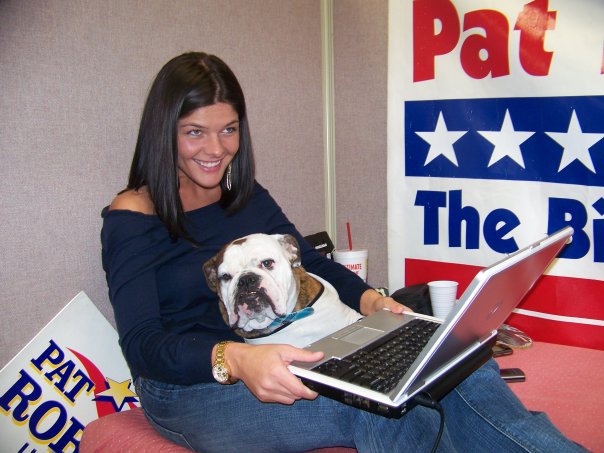 No offense to Caitlyn Jenner, but that doesn’t look like a “Mister” to me. They went to all the trouble of recording messages for individual electors, but didn’t bother Googling them first?

Misgendering someone is usually a serious offense on the left, but I get the feeling they’ll let this one pass. Besides, gender is just a social construct anyway…

My favorite part of these videos is the insistence that they’re being done with respect. These celebrities respect you, Republicans. Sure, your whole life they’ve sneered at you and the things you believe. Okay, yeah, so they’ve demonized you and dismissed you. But that was before you had something they wanted. Now, suddenly, you matter. Now they promise to be your friends, if you’ll just do what they want.

Hell, if you’re lucky, they might even get your gender right.

If Hillary had won, I’m sure the hardcore Trump people would be trying something similar right now. And I’d tell them what I’m telling George, Jed, Hot Lips, and the rest: It’s over. You don’t have to like it. You don’t have to shut up about it. (Please don’t, or I’ll be out of a job.) But the longer it takes you to come to terms with it, the worse it’s going to be for you. At this point, you’re just tormenting yourselves.

Not that I mind, really.

Donald J. Trump is the next President of the United States. I’m not looking forward to it any more than these celebrities and former celebrities are. But at least I get to savor the schadenfreude as I watch them make fools of themselves.