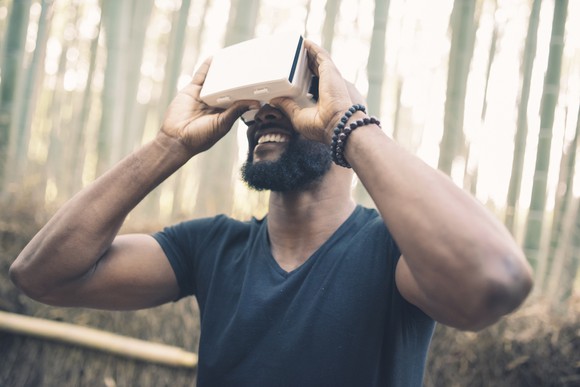 There are plenty of companies dabbling in virtual reality (VR) these days, but only a handful are making big plays in the space. Facebook (NASDAQ: FB), Sony (NYSE: SNE), and Universal Display (NASDAQ: OLED) fall into the latter category, and investors on the hunt for solid virtual reality stocks to buy now should give these three a good look.

The latest TouchStone statistics predict that there will be 171 million active VR users in 2018, and TrendForce research shows that the VR market will be worth $70 billion by 2020. So let’s take a deeper look at how each company is betting on this growing market.

Sony might not be the first company you think of when looking for a VR investment, but its recent Playstation VR headset release has propelled the company to the forefront of the space.

Sony is working with more than 200 developers and publishers to create VR content for its PS4 consoles (which now consist of the original version, as well as the new Slim and Pro versions), and has already sold more than 50 million total units. The scope of the company’s sales, and the fact that the consoles can now be used with their own VR headset, makes Sony an interesting play in the VR space.

In a statement earlier this year the company said:

Sony has identified virtual reality as an area it believes offers great future potential for the Sony Group in games, as well as other areas. Virtual reality is an application in which Sony believes it can leverage its technological strengths in areas such as digital imaging, content acquisition and production, as well as its entertainment assets.

The company expects that in fiscal 2017 its game and network services operating profit will increase 52% year over year, mostly due to sales of its consoles. That’s important because after its financial services business, gaming is the second-largest operating profit segment for Sony.

With Sony’s gaming division such an important part of the company, you can bet that its VR focus is more than just a hobby.

Facebook is the obvious major player in the space because of its $2 billion purchase of virtual reality company Oculus in 2014. But despite the investment — and Oculus’ release of its Rift headset earlier this year — investors should know that an investment in Facebook’s VR prospect is a very long-term bet.

Oculus has said that it’ll likely take five to 10 years for VR to take off, but Facebook is willing to wait — mainly because it believes VR could be truly transformational.

Facebook CEO Mark Zuckerberg said in a Bloomberg interview earlier this year about VR: “This is a good candidate to be the next major computing platform. It’s worthy of a lot of investment over a long period.”

He wants to see people watching sports in virtual reality, creating and experiencing movies in it, and, of course, engaging in social interactions through VR. Oculus focuses on games, too, but the long-term vision is for the company to create a completely new platform.

Investors shouldn’t get hung up on reports of slow sales of the Rift. Device sales contribute next to nothing compared with Facebook’s other revenues. Instead, investors should look at how Facebook wants to use VR to transform the way people communicate. It’ll take some time for Facebook’s VR plans to come to fruition, but investor patience could pay off if the company is successful.

If you don’t want to invest in virtual reality as a new computing platform or bet on Sony’s console play, then an investment in VR’s display technology might be the next best thing.

Universal Display makes organic light-emitting diode (OLED) technologies that can be found in computer, smartphone, and TV displays. The company holds thousands of patents in the space and licenses its technologies out to major tech companies like Samsung.

But the company’s VR opportunity comes from the many ways OLED can be used with VR. Universal Display’s key phosphorescent OLED materials are small and flexible, and some are even semitransparent, which makes them a perfect fit for VR headset displays. This OLED also emits vibrant colors that outperform other displays and consumes less energy than many other display materials.

Investors should know that the company’s stock price has seen lots of ups and downs recently, mainly due to Universal’s expected dips in revenue. The company is in the middle of transitioning customers to its new OLED materials that will bring higher margins, but the process has taken a bit longer than expected. That shouldn’t worry investors too much, though, as Universal Display’s customers still plan on adopting the new technology in 2017.

10 stocks we like better than Universal Display
When investing geniuses David and Tom Gardner have a stock tip, it can pay to listen. After all, the newsletter they have run for over a decade, Motley Fool Stock Advisor, has tripled the market.*

David and Tom just revealed what they believe are the 10 best stocks for investors to buy right now… and Universal Display wasn’t one of them! That’s right — they think these 10 stocks are even better buys.

Chris Neiger has no position in any stocks mentioned. The Motley Fool owns shares of and recommends Facebook. The Motley Fool recommends Universal Display. Try any of our Foolish newsletter services free for 30 days. We Fools may not all hold the same opinions, but we all believe that considering a diverse range of insights makes us better investors. The Motley Fool has a disclosure policy.