BERLIN — Berliners woke up to a day of protests, mourning and excitement for an upcoming soccer game Wednesday as the city grinds back into daily life.

Security around the market has gradually lowered and stores in the city rush to save what’s left of the holiday season.

Meanwhile, a crowd has gathered around one of the many candlelight memorials around the area, police have just named a new suspect in the case, and a nationwide manhunt is underway.

Frank-Walter Steinmeier, the German foreign minister, made an appearance at the market with his Italian counterpart, Angelino Alfano, who’s in town to pay respects for an Italian victim of the attack and update reporters on the latest in a series of Islamic State-inspired attacks around the country.

“We’ve had a lot of terror attacks in Germany — in Reutlingen, in Würzburg, in Munich, for example,” Konstantin Wendel told The Daily Caller News Foundation. “Now that it happened here I’m sad, but I’m not surprised.” 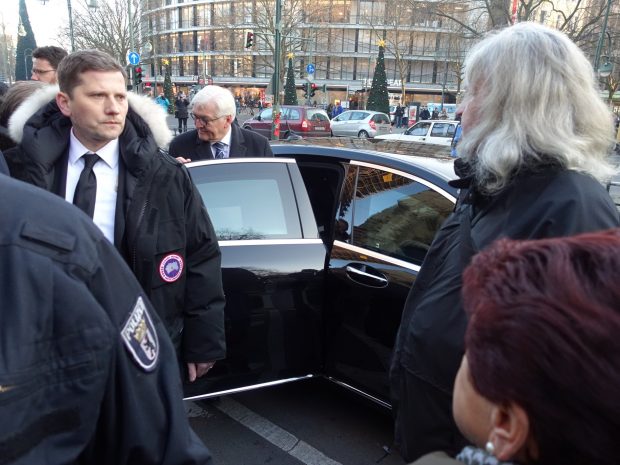 Word has it that the National Democratic Party of Germany (NPD) is planning a rally next door to the market in the afternoon. NPD, by many considered a neo-Nazi party, wants the world to know that Chancellor Angela Merkel has “blood on her hands.”

Reinhard Neumann, the mayor of a neighborhood in the western part of the city, urges everyone to back the “Alliance Against the Right,” a group of left-wing extremists, during their counterdemonstration.

“We have never left the City West to the right-wing extremists – and this is not going to happen now,” Neumann declared.

Few tourists get to experience the world outside the historic and financial parts of the capital. A 10-minute subway ride will take you from the Christmas market to the Turkish neighborhoods of Berlin. Shops have signs in foreign languages, and there are kebab shops at every corner. If it wasn’t for the frigid temperature, it could almost be a magical shortcut to Istanbul.

The abandoned Tempelhof Airport is located in one of these areas. What was once an integral part in Adolf Hitler’s vision of a “world capital” is now the home of 2,000 refugees. Police stormed the facility just a few hours after the attack as they looked for leads in the investigation.

It’s in areas like these where Islamist networks scout for potential recruits.

Authorities recently celebrated the break up of the ISIS-linked “True Religion” group after simultaneous raids of 200 mosques, apartments and offices across 10 states in November. (RELATED: Germany Carries Out 200 Simultaneous Raids Against Islamists)

“The message to the radical Islamist scene is clear: we do not tolerate fanatics who try to radicalize young people and send them to jihad,” Peter Beuth, the interior minister for the Hesse state, said at the time. “By banning this organization, a major source of radicalization has been eradicated nationwide.”

But the rapid growth of radical Islam has been too fast for authorities to control. The story of Syrian refugee Jaber Albakr underlines just how successful Islamist recruiters can be in parts of the country.

Albakr was the subject of a nationwide manhunt in October after large amounts of “highly-explosive material” were discovered during a raid in the city of Chemintz. Authorities feared he was on his way to Berlin to carry out an attack at the Tegel Airport. Police apprehended Albakr after two days and he committed suicide in his jail cell soon after. Investigators later concluded Albakr had been radicalized during his year-long stay in Germany and not in Syria. An imam at his local mosque in Berlin had “brainwashed him,” according to his brother.

Some Syrians say they have a hard time finding a good Mosque to join in Germany for this very reason. The available ones are simply too radical compared to what they’re used to in Syria. (RELATED: Syrian Refugees: Mosques In Germany Are Too Extreme)

The radicalization problem in Berlin and the rest of the country came full circle Monday. An attack on Berlin eventually happening was expected, but they didn’t necessarily think it would target a long-standing cultural tradition.

“We all kind of thought something like [a terror attack] was going to happen, but no one thought a truck would crash in a Christmas market,” Annika, who didn’t want to disclose her last name, told TheDCNF. “I don’t want to blame the refugees but there is a big problem with religion — people interpreting their religion wrong or maybe not the way they are supposed to.”

Annika and her fellow Berliners have become more comfortable discussing the shortcomings of Germany’s immigration system. The changing mood around the country is portrayed in the new book “The Night that Changed Germany” by Christian Wiermer and Gerhard Voogt. It examines how the mass sexual assault scandal on New Year’s Eve in Cologne made people lose trust in authorities and their ability to protect them.

Even Merkel has gradually come to terms with the fact that the immigration system is broken. The country has a deportation backlog in the hundreds of thousands. The now-deceased suspect behind the attack, Anis Amri, dodged expulsion because he didn’t have proper identity documents on him. The chancellor has promised to carry out 100,000 deportations next year if she gets re-elected for a fourth term, but it requires people to leave on their own account.

“We will press ahead with examining whether certain state measures need to be changed,” Merkel said during a press conference Friday. “The Amri case raises lots of questions. Not only questions about the deed but also about the time leading up to it ever since he arrived in Germany.”

The new German tone is on full display when the protests eventually break out by the Christmas market. Police work to separate the two groups during a competition for who can be loudest. Officers decide to set up a media zone right in the firing lane and broadcasting companies from around the world rush to shoot a segment from the “war zone” once known as downtown Berlin. The locals, on the other hand, are more concerned about the fact that their commute home from work just got a little trickier. A demonstration against Merkel and the refugee influx is barely noteworthy anymore.

Meanwhile, another rally is taking place a mile away. A hundred or so people have gathered outside the gigantic Chancellory building Merkel calls her office. “Merkel must go,” they shout, as police raid two apartments in other parts of the city. 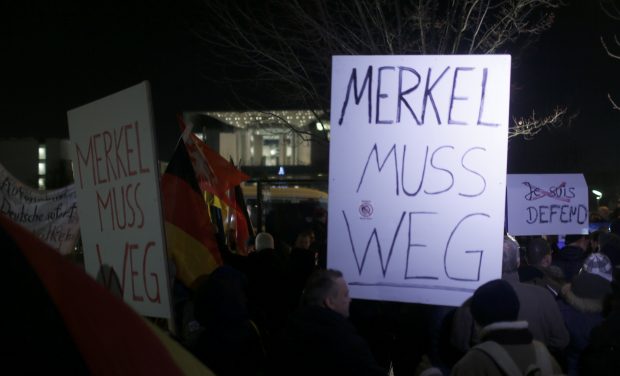 The protesters run out of energy by the time police finish the clean-up of the attack site. The last road blocks are removed and rest of the market comes full circle around the stunning Kaiser Wilhelm Memorial Church. 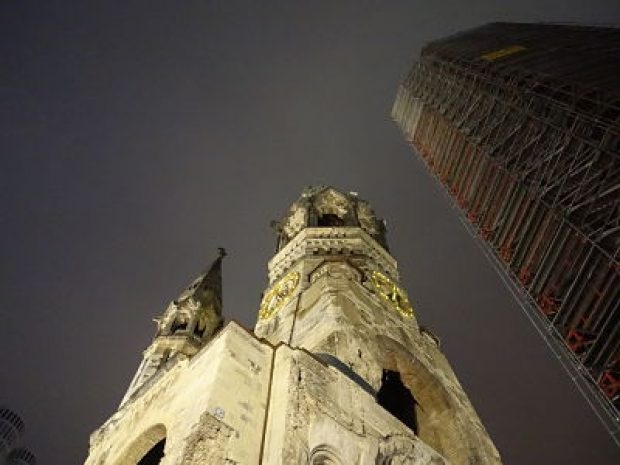 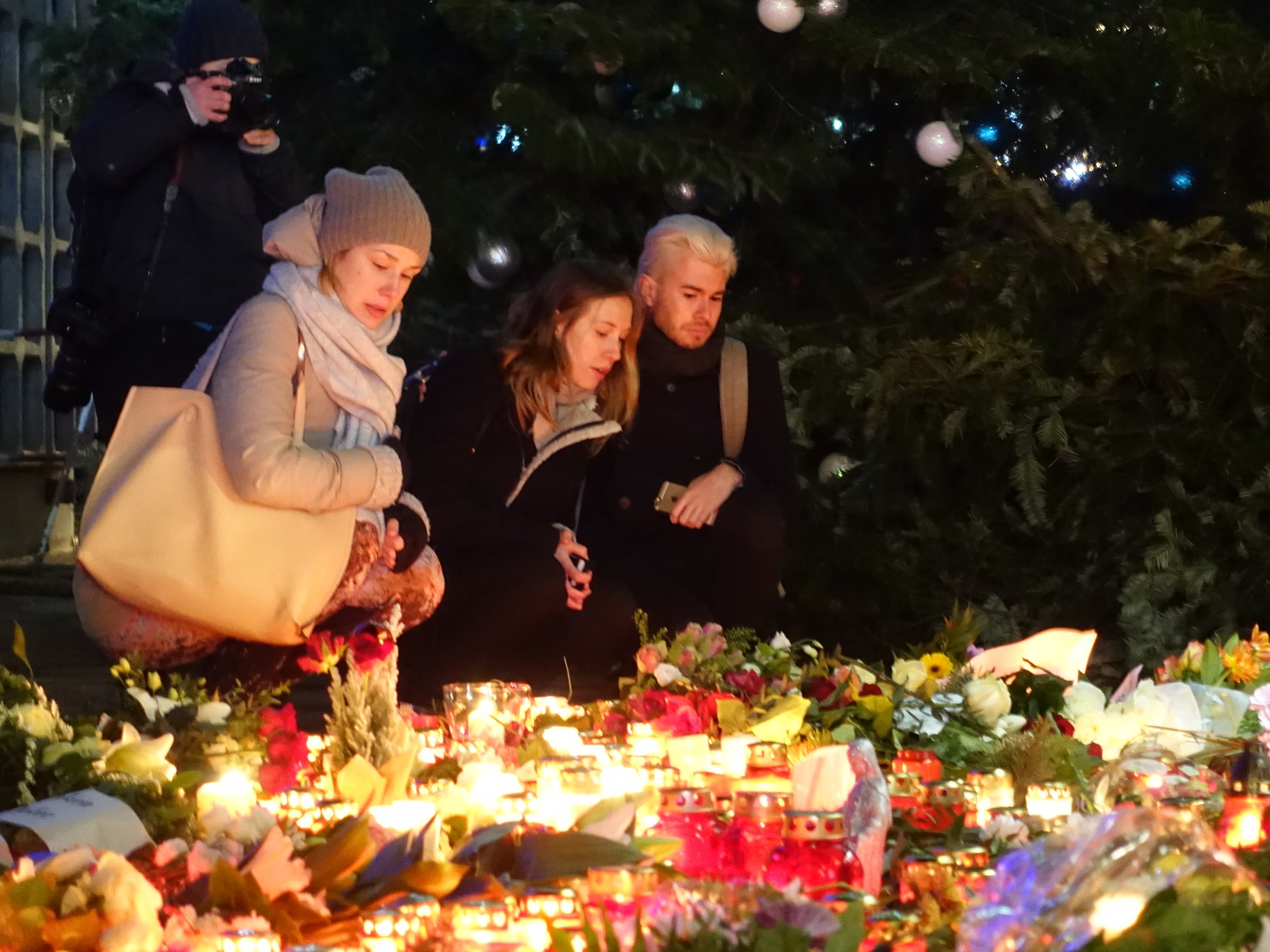 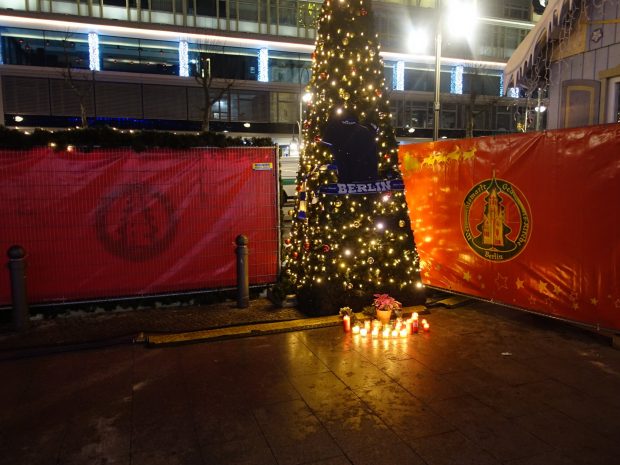 A Christmas tree has been place at the spot where the truck crashed into the market. (Jacob Bojesson/TheDCNF) 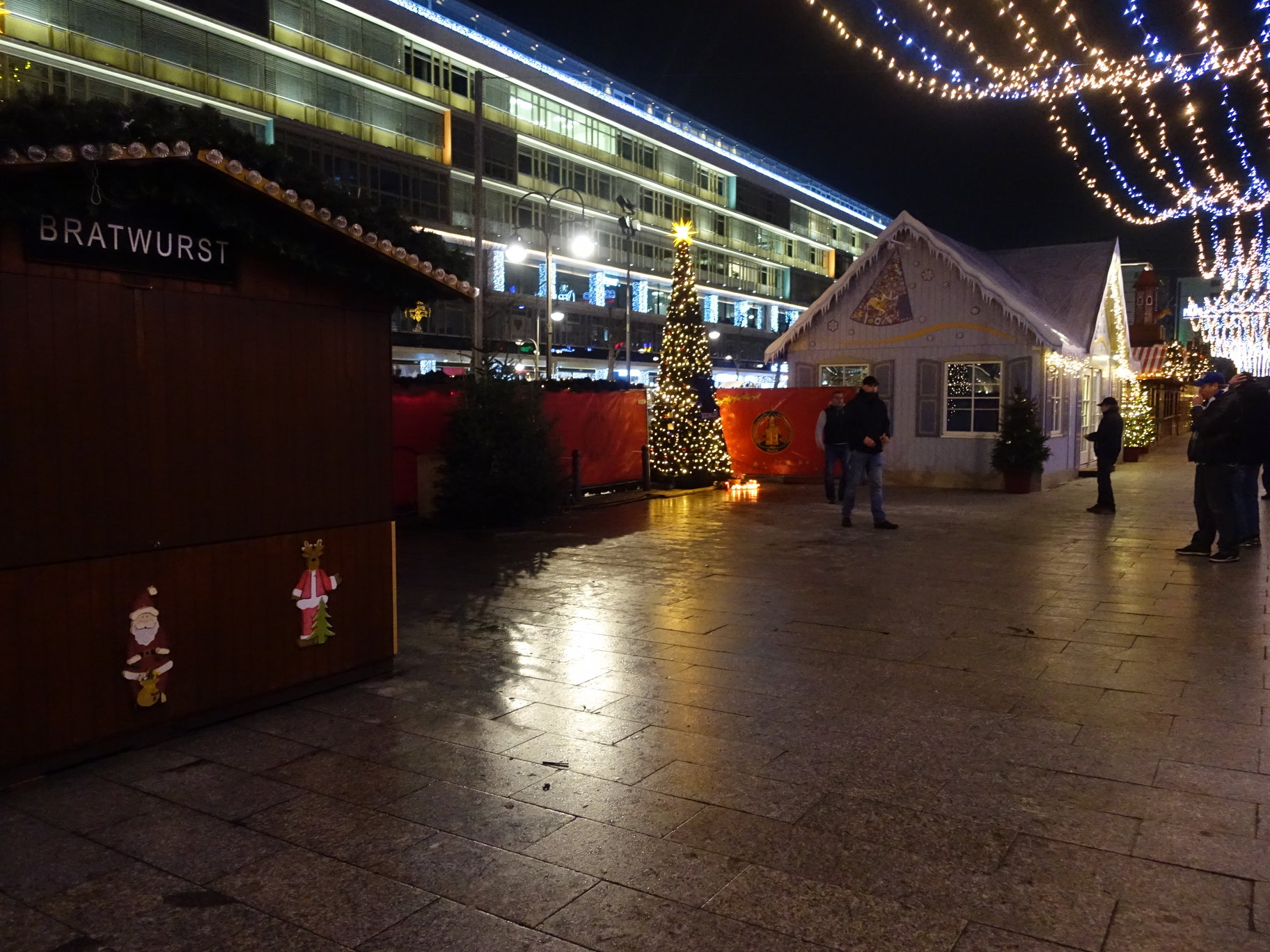 An empty space is left where shops were too damaged to save. (Jacob Bojesson/TheDCNF)

Abu Hussein, a Syrian refugee, knees to take a selfie with a sea of candles in the background. He’s surrounded by a group of soccer fans who take full advantage of Germany’s liberal stance on open containers as they pregame for Hertha Berlin’s matchup with Darmstadt.

Abu Hussein and his Iraqi friend are at the market to pay respect for the victims of an attack they describe as “not human” and something they only thought happened in their home countries. They explain how they’ve felt the tension rise in their interactions with the Germans over the past few days.

“There are many racist people in Germany,” Abu Hussein told TheDCNF. “We see this in the streets.”

He adds that the vast majority of people are generally welcoming toward them. Abu Hussein is just one of a million people the country has opened its doors to, but he can’t help but blame it for having to leave Syria in the first place.

“All European governments are the cause of the problems in our countries,” he says. 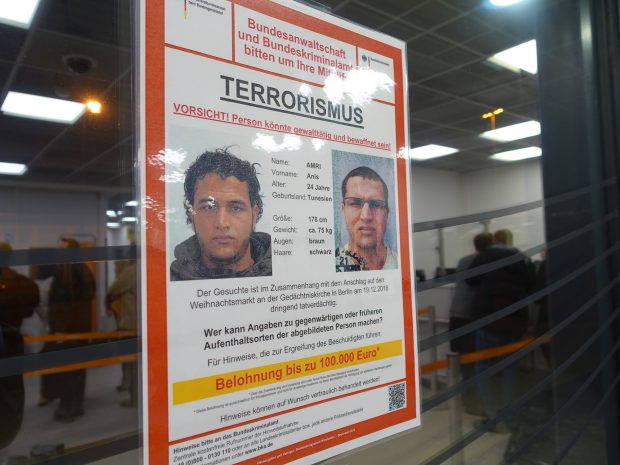 Police offer a 100,000 euro reward to anyone who can lead them to Ansi Amri. (Jacob Bojesson/TheDCNF)

Authorities later announce they hope to open the market back up the following day. Hertha beats Darmstadt 2-0 in an emotional game. The city gets to go to bed with a much needed win during a time of mourning.

The holiday season has now been restored after an unexpected delay. The lights at the market have been turned on and stores inside the nearby KaDeWe mall play Christmas tunes on full volume.

Berliners will celebrate Christmas with their families this weekend like they always have. The only difference this year is that they do it with a fresh reminder that terror can, and probably will, strike again.

“I’m not sure what we can do [to prevent this], honestly. Just try to kind of not be scared,” Annika concludes.