HEAD And SAFAVIAN: Coronavirus Is Not A Justification For A Police State

Here Is What To Expect In The Next Coronavirus Relief Bill
Jordan Fox Reporting Intern
January 10, 2017 1:41 PM ET
Font Size:

Amid accusations of facilitating illegal sex trafficking, including child sex trade, Backpage.com shut down its adult advertising section in what the website calls a violation of its First Amendment rights.

In a statement released Monday, Backpage claimed that the U.S. Senate investigation and report that ultimately caused it to shut down its adult section was “an accumulation of acts of government censorship using extra-legal tactics.”

The Senate investigation began in 2015, and the results were released Monday.

While the Senate report said that the site deleted key words that would indicate child sex trafficking like “Amber Alert,” “teenage,” and “Lolita,” as early as 2006, the pressure to shut down the section will now undermine Backpage’s efforts to assist law enforcement to “identify, arrest and prosecute those who engage in human trafficking,” according to the statement. 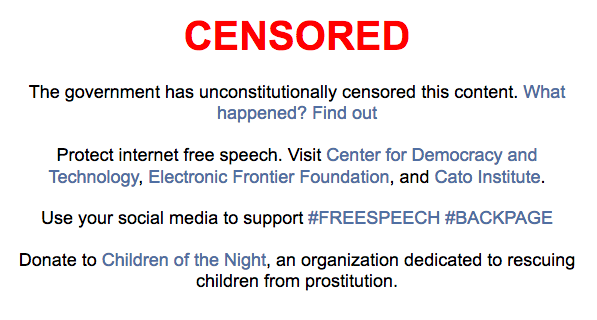 The Senate report also said that Backpage “knowingly concealed evidence of criminality by systematically editing its adult ads,” and also that executives were aware the website was being used for illegal activity, such as child sex trade.

This decision is a long time coming, as court battles over the controversy began in 2014, when Boston law firm Ropes & Gray represented three child sex trafficking victims against the website in October in U.S. District Court in Massachusetts, according to the Boston Business Journal.

The U.S. District court sided with Backpage, and an appeal by Ropes & Gray was also denied. Both courts cited the Communications Decency Act, or CDA, saying it protected the website.

Ropes & Gray then appealed to the Supreme Court, but the court announced Monday that it would not hear arguments on the case.

Despite Backpage closing the adult section, the site said it will continue to fight for online freedom of speech and “believes that courts will continue to hold, as they have consistently so far, that heavy-handed government tactics to suppress a forum for Internet speech violates basic constitutional values,” according to the site’s statement.