“People look so stupid when they try to dance.”

And…a humblebrag: “Mom I sat with @chrislhayes at Josh’s wedding & told him you love his show & he said he likes your movies more than dad’s.” — Dreyfuss. The wedding he’s referring to is that of Business Insider‘s Josh Barro, who married Zachary Allen over the weekend.

(Dreyfuss’s father is Richard Dreyfuss. The mother he’s speaking of is Jeramie Rain.)

From the Trump Pool Potty... “At 9:41 a.m., Omarosa arrived from the back entrance, pulling a rollerboard bag with a hot-pink airplane neck pillow hanging from the pulls.” — NYT Maggie Haberman.

CNN’s Brian Stelter really loves this compliment about himself

SNL comedian who sparred with Milo is anti-MATCH.com

“Have had a couple of friends who encountered very bad experiences. One where here personal info was taken for credit scam. DONT USE MATCH.” — Leslie Jones, comedian, SNL, got into a sniff with Breitbart News‘ Milo Yiannopoulos and got him thrown off Twitter.

And the White House chef will be…

‘”People would want to see this’ is not an argument for publishing. People want to see a lot of bad, destructive, and even fake things.” — Carlos Maza, video producer, Vox. Previously flacked for the DNC over at Media Matters.

“Back from leave with my wife and newborn. Looks like nothing has been going on in health care, huh?” — Bob Herman, healthcare business reporter, Axios.

Does Benny Johnson want to be poached from IJR?

“Being a talent incubator for CNN, WaPo, NewYorker, Hill, Axios etc. is a good thing — We’re proud of our culture & glad to see it spread!” — Benny Johnson, creative director, IJR. 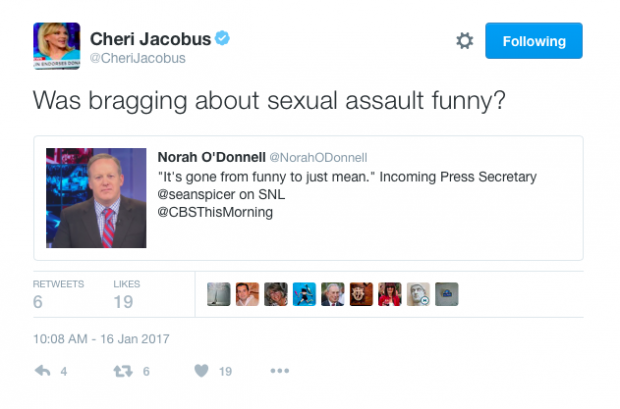