TV makeup artists must have a tough time with the puffy bags underneath President Donald Trump‘s squinty eyes. Do you highlight them? Ignore them like the plague?

Before we get into the weeds of all that, maybe there’s a new beauty trend happening.

With Rep. Elijah Cummings (D-Md.) talking up how much he’s looking forward to working with the new president on mutual interests such as prescription drug issues, perhaps the congressman has taken things too far with his own eyes.

On a serious note, as reported by America Urban Radio White House correspondent April Ryan, Trump phoned Cummings. “It was about a four minute call,” she said in a radio report, explaining that Trump told Cummings that they have more in common than they had differences. “At the end of the call, President Trump expressed his condolences regarding Cummings staffer who lost staffers in a house fire in Baltimore.”

The call came after Cummings appeared on MSNBC’s “Morning Joe” and expressed a desire to work with the President.

Next time makeup artists may want to go with a darker foundation. 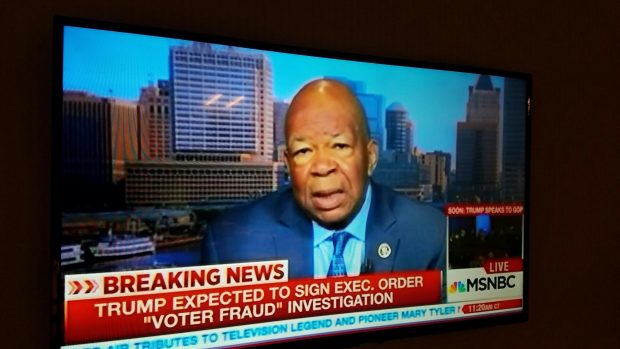