[solidcore] is the name of a gym in Washington, DC. Which instantly makes it both my least favorite and second-least favorite place in the world. The unnecessary punctuation in the name is also annoying. As is the fact that the founder of the gym, Anne Mahlum, can’t just take Ivanka Trump’s money and shut up about it.

Update: Mahlum has deleted it. Here it is. 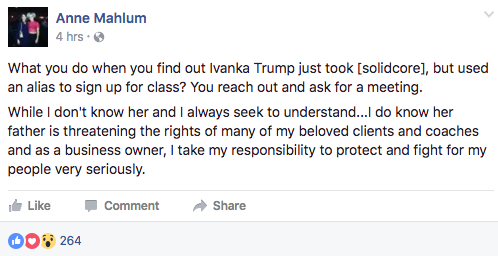 Mahlum doesn’t specify which “rights” are being “threatened” by Ivanka’s father, because that doesn’t matter. Facts don’t matter, only feelings do. And now that Mahlum knows that the daughter of the man who beat Hillary has been breathing her air, it makes her feel bad. Now she needs a meeting.

Violating the privacy of a client like this might not be the best move, ethically speaking, but it should be good for Mahlum’s business. Go ahead, make your gym a No Trump Zone. Cut yourself off from anybody who might disagree with you. Isolate yourself from any opposing opinions. That’s what most people in DC have been doing for a very long time.