At the 2016 SHOT Show, Colt debuted their time tested and battle proven 1911 in 9mm; the Colt Competition Pistol. This pistol is built for action shooting from its ten round capacity to the adjustable Novak sights to the undercut frame and beavertail grip safety. Surprisingly the pistol was competitively priced with a MSRP of $949. Colt built this pistol for IDPA’s ESP Division where 9mm is king. It will also serve well in USPSA’s Limited 10 or Single Stack Divisions, but you give up scoring in 9mm; so you might want the .45ACP version. Colt expanded the CCP line at the 2017 SHOT Show. This family of pistols was made available in a stainless and .38 Super became a caliber option.

When I opened the box the first thing I noticed was the custom VZ Grips. These highly textured blue G10 grips have the Colt logo molded into them. VZ relieves the magazine release side of the grips to place your thumb on the release every time you need to do a mag change. This feature is a big aid when indexing the pistol in the dark and low light.

The next item one notices is the blue Novak fiber optic front sight. While the Colt blue sight was visible in bright sunlight, it is very hard to see in low light. I installed a red fiber the second trip to the range. I wanted to see the sight in all conditions when running this 1911 in competition. Out of the box, Colt did have the adjustable Novak rear sight set for point of aim/point of impact. There was little variance with any weight bullet. Some folks will tell you that this adjustable sight is needed, but I have found if you shoot major power factor ammunition, there will be little variance of POA/POI. About the only time an adjustable sight helps if you shoot true low power target loads.

One of the complaints about Colt’s 1911’s has been the “down swept” beavertail grip safeties. Thankfully they now install a proper up swept speed bump grip safety that was perfectly fit. You will also find an extended single side thumb safety for ease of manipulation.

Fit and finish of the pistol is what one would expect from Colt. The matte blue finish was flawless and even. The only way the finish would have been better is if it was high polish bluing of old. Moving the slide on the rails it was smooth as butter. I could not feel any roughness when riding the slide slowly into battery. This is a sign that Colt still builds their 1911s properly.

Two features of this pistol that I liked are the short recoil plug. This allows you to clear a jam off of a shelf or door frame is needed. Back in days of old when I was issued a 1911, the short plug allowed you to pinch check the condition of the firearm. To the entire current crop of young  RO’s do not have a stroke, Uncle Sam taught thousands of soldiers to do this without having traumatic amputations of the forefinger of our non-dominant hand.

To help mitigate and control recoil, the rear of the trigger guard is scalloped. In conjunction with the nicely fitted speed bump beavertail grip safety the shooter gets a higher grip on the pistol. This lowers the bore axis in the hand, which reduces muzzle flip. The new dual recoil spring system Colt is using further mitigates felt and actual recoil.

Since the weather was cooperating I was able to make several trips to the range with the Competition Pistol. The 1911’s first trip to the range was just to see how it shot. As is my standard practice I took a mixed bag of 9mm ammunition with me. Head stamps ranged from Black Hills to Wolf and only the good Lord knows what all the bullet weights were. I loaded the factory magazines and magazines from Wilson, Dawson Precision and Tripp Research. One hundred fifty rounds plus later the Competition Pistol was still putting rounds down range without a hiccup. This 1911 was consistently keeping all rounds in the “C Zone” at twenty five yards regardless of the bullet make or weight.

The second venture to the range I had swapped the blue fiber optic for a red one and packed Black Hills 124 grain hollow points and 115 grain full metal jacket as well as Federal’s Syntech and 124 grain HST.  I have found these loads to be some of the most accurate loads on the market. I did bring out an additional factory load to see if it would cause issues with the dual recoil spring system, a couple factory 147 grain subsonic loads. Some of the dual sprung polymer pistols have had issues with subsonic loads, so I wanted to test the Colt with them.

Accuracy testing of the Competition Pistol was done at twenty five yards, shooting five shot groups using my MTM Site-In-Clean. While this rest is built for work with rifles, I have found it works well with most handguns giving consistent support to the frame. For targets I used Birchwood Casey’s Dirty Bird 12X18 IPSC Bad Guy Target. These targets are a true small USPSA to make you aim small and hits are easily seen at twenty five yards.

I went out to the range early so the sweltering summer temperatures would not affect the shooter. It is hard to shoot accurately when you are blinded by sweat. The Colt Competition Pistol performed like a 1911 should, groups hovered at two and a half inches; give or take a smidge. This is as good as I can make pistol shoot. I have no doubt that this pistol is capable of shooting tighter groups by someone with younger eyes and a gentler trigger squeeze. However for action pistol shooting and most any other application this pistol is ready to run. I attribute this consistent performance to Black Hills and Federal’s quality ammunition as well to Colt properly fitting the barrel.

I am pleased to report the Colt never missed a beat with the Lawman load. This CCI offering is gentle shooting and with very little recoil is ideal for IDPA, USPSA, and three gun competition. I have only seen a few pieces of steel require more than one shot to take them down.

Overall I found the Colt Competition Pistol to be an excellent 1911. With Colt marketing it for competition, I was surprised the CCP did not ship with a magazine well and extended “tactical magazine release.” These are features that a competition pistol beg to have and they would not vastly increase the $949 MSRP. As it stands, I can tell you I was impressed enough with the Colt Competition Pistol that I sent them a check to keep this 1911.

The S&A Magwell aids in smooth quick magazine changes. Some argue it adds length to the pistol making it less concealable. All of the magazines I use have magazine pads that are a bit longer than the magwell, making this a moot point. Needless to say this is a personal choice and won’t affect the pistol’s function either way.

A major change I did make was to add a Cammer Technologies Hammer/Sear and Cylinder & Slide Series 80 Trigger Pull Reduction Kit from Brownells. These parts drastically improve the trigger pull of any 1911 when installed individually; but together your pull will be like a custom trigger job. When I installed these parts the trigger pull dropped from six”ish” pounds to four and a half pounds; crisp.

It may not seem like much but the titanium nitride coated pins and levers in the Cylinder & Slide Reduction Kit greatly reduce the trigger creep and mushy feeling associated with series 80 safeties. The CSRK with its titanium nitride coating ensures all the parts move smoothly and freely. I have installed just the CSRK in a couple of 1911s over the years and the results are always the same, the trigger pull is smoother. I have one 1911 that these parts were installed in back in 1995 and the moving surfaces still are coated. These parts will fit any 1911 with a series 80 safety; Colt, ParaOrdnance, Remington, etc. It will be $44.00 well spent.

The other addition to the Colt was a hammer and sear from Cammer Technologies. What sets this hammer apart from others is the scoop on the hammer. During the cycling of the slide this scoop allows the firing pin retention stop (the plate you see surrounding the firing pin) to meet the hammer higher reducing the amount of energy required to cycle/cock the hammer. Cammer has detailed information about the actual reduction in force on their website, it is quite informative. This reduction of force translates to a smoother, faster less harsh recoil of the pistol. During the cycling of the 1911 this will translate to less muzzle rise and faster shots.

Cammer offers their hammer in 4140 barstock or 420 stainless. I chose the stainless for ease of maintenance and it looks good against the matte finish of the pistol. Specify which you prefer when you order, either one will set you back $98.

To truly improve the trigger pull, when you order the hammer; order the match sear. EGW machines their time proven tool steel sear to Cammer’s specifications which yields an out of the package 4.5 pound pull; at least it did with the C&S Reduction Kit. There was no creep and the trigger broke like glass with every pull. If you order the hammer/sear, the kit will cost you $128. When coupled with the C&S Reduction Kit you will be able to achieve a nearly gunsmith quality trigger pull in a series 80 1911 without needing to send the pistol out and the only weight is the delivery time.

With the addition of an S&A Magwell, ambidextrous safety, extended magazine release and improving the trigger with Cammer Technologies and Cylinder Slide ignition parts the Colt Competition Pistol is practically perfect. It is a reliable pistol, accurate and it fits all my 1911 gear. I will put it through its paces this year shooting USPSA Limited 10 with it. If you are looking for a good buy, Colt’s Competition Pistol 1911 is it. I know it will work well for competition but I’d also feel well armed with it for duty or personal protection.

Scott Smith is a Disabled Veteran serving in the Army and USAF Reserve. He has been a federal police officer, is a charter member of IDPA and is actively involved with USPSA and various three gun competitions. 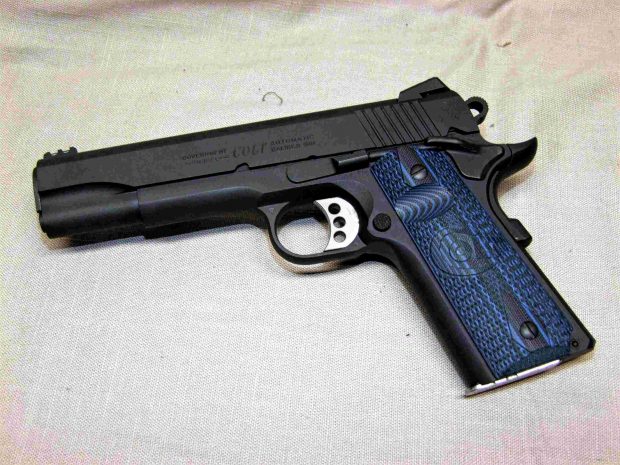 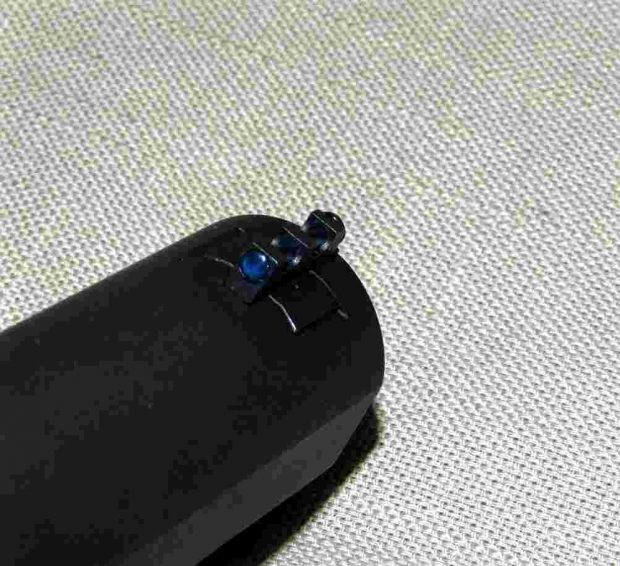 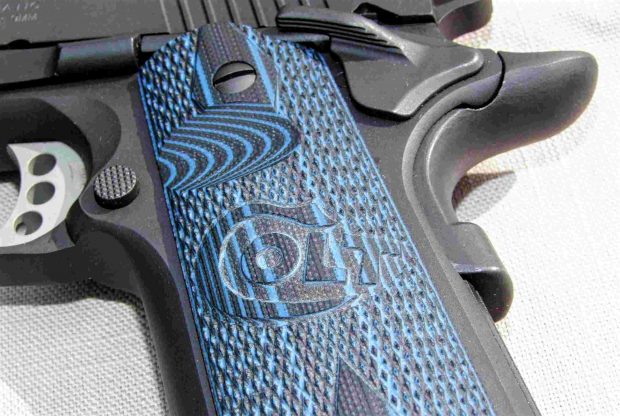 Close-up of the scalloped VZ Grips, G10 double diamond grip – these grips are virtually indestructible and give good purchase in all conditions. 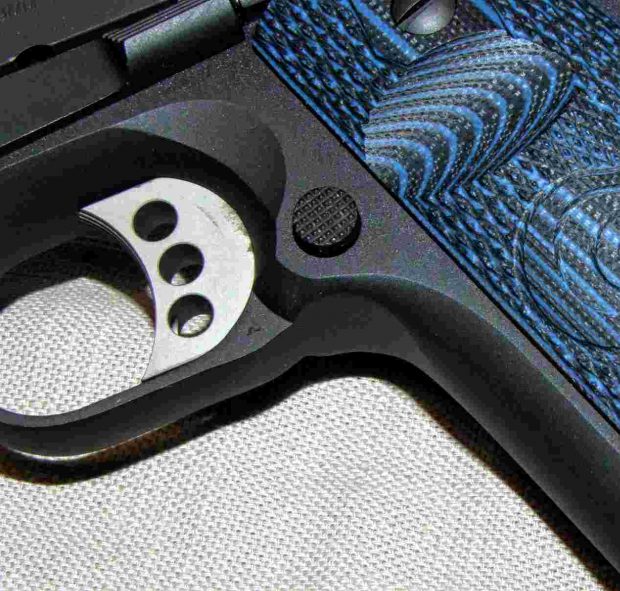 Colt scallops the front strap at the trigger guard to give you a higher grip which helps reduce recoil. 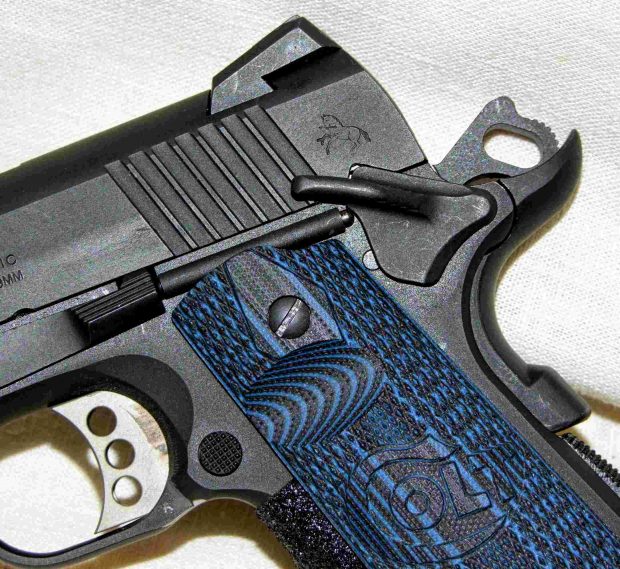 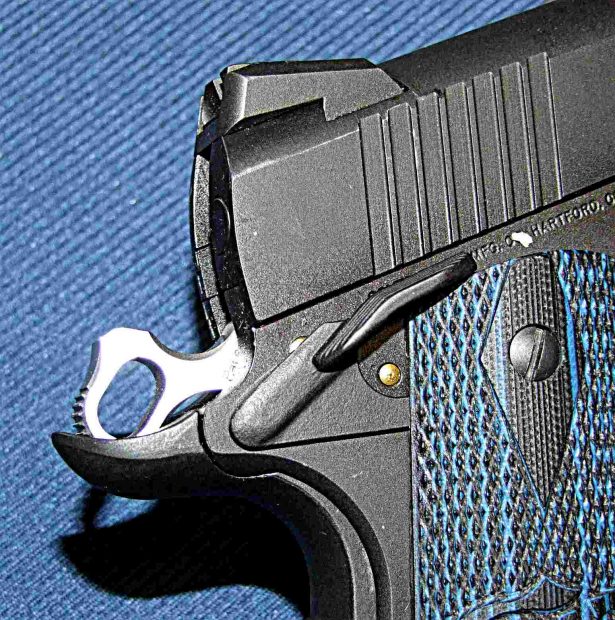 Cammer Technologies Hammer, note the dish in the strut. This reduces the energy to cycle the slide, reducing the recoil impulse. You can see the gold titanium nitride hammer and sear pins from the Cylinder&Slide Reduction Kit. 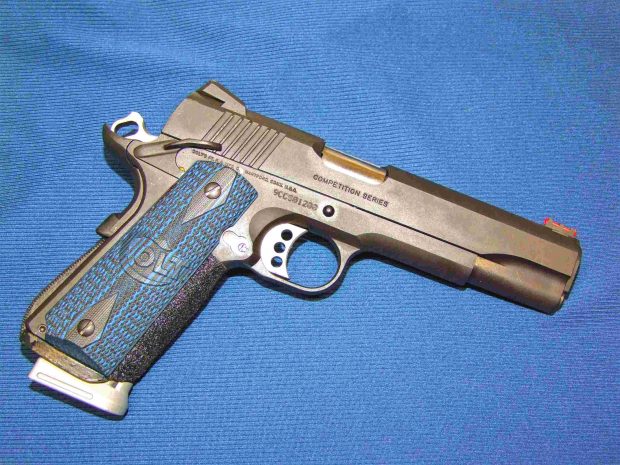 This is how my Colt Competition Pistol looks ready for use with Cammer Technologies Hammer/Sear, C&S RK, Smith & Alexander AMSH, ambidextrous safety, anti-skid tape added to the front of the grip for better purchase and a red fiber optic to better track the sight. It’s a practically perfect pistol for competition, plinking and even personal protection. 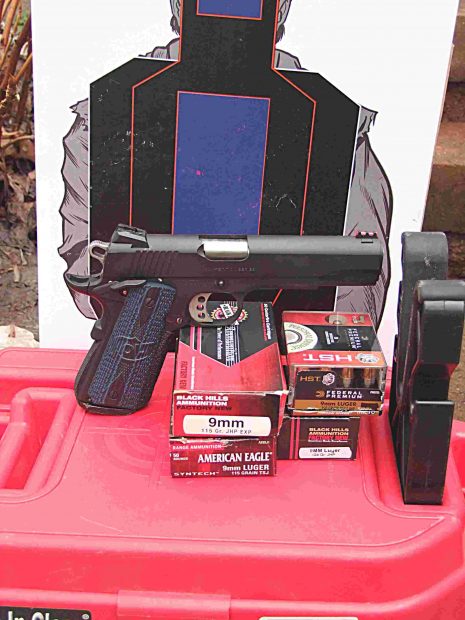