Six U.S. service members raised the U.S. flag on Mt. Suribachi during the Battle for Iwo Jima 72 years ago Thursday, which was captured in the Pulitzer Prize winning iconic photo by Joe Rosenthal.

Three of the Marines photographed were killed in the following days of the battle. The photo was widely hailed in the U.S. and has become a symbol of the U.S. effort in World War II and the U.S Marine Corps. The photo was later memorialized in 1954 at the U.S. Marine Corps Memorial in Arlington, Va. 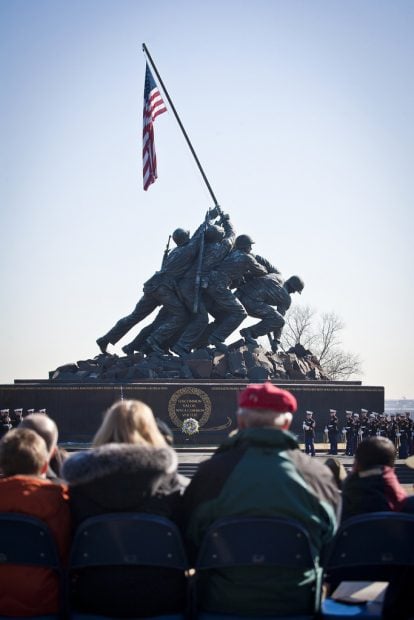 The flag is raised above the Marine Corps War Memorial during a wreath laying ceremony Feb. 23, 2011, to honor the 66th anniversary of the flag raising on Mt. Suribachi during the battle of Iwo Jima. Marines, veterans and guests gathered to honor an event, which lifted the hope of a nation at war during the heat of the Second World War.

The photo engendered some controversy in the summer of 2016 after the U.S. Marine Corps admitted it had misidentified one of the men in the photo. The misidentified man, Navy corpsman John Bradley, rose again to international fame after his son wrote a best-selling 2000 book detailing his father’s role in the battle. 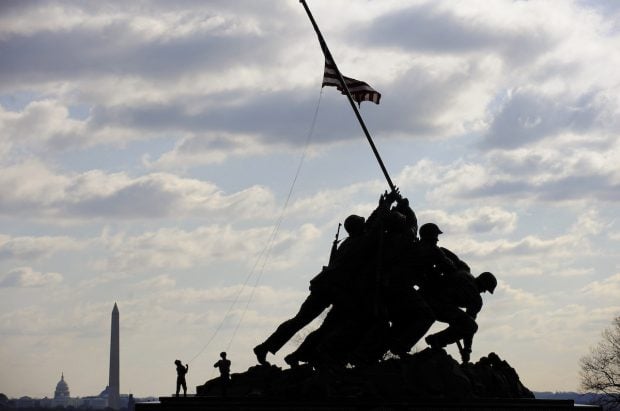 A pair of US Marines attempt to untangle a wind-blown flag before a ceremony in honor the 64th anniversary of the raising of the US flag on the island of Iwo Jima during World War II, at the Marine Corps War Memorial in Arlington, Virginia, February 23, 2009. REUTERS/Jonathan Ernst (UNITED STATES) – RTXBZVB

The man actually pictured in the photograph, Corporal Harold Schulz, died in 1995 and never publicly disputed the originally identified service-members in the photograph. Schulz’s family told The New York Times, he only mentioned his role a few years before he died. When his step-daughter heard the news she reportedly told him, “my gosh, Harold, you’re a hero,” to which replied “no, I was a Marine.”