President Trump would not give an example of a single time he’s been deserving of criticism during an interview on “Fox and Friends” Tuesday. 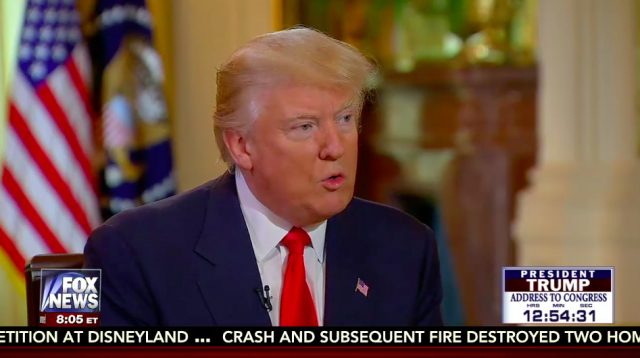 “No, probably not,” Trump jokingly responded. “I could never do that…”

“Honestly if I do that and that does happen and I take a hit, I won’t give you any additional ammunition,” Trump continued. “Over the years, you make a mistake. I fully understand when they hit you, but when they make stories up, when they create stories, because I believe that sometimes they don’t have sources. The sources don’t exist. And sometimes they do exist. I just thought, in light of the fact of fake news, I thought it would be inappropriate…”

1
'You've Gone Completely Mad': Interview Between Piers Morgan, Rudy Giuliani Goes Off The Rails
World
2
Women Slammed For Removing Graffiti After DC Protests: ‘Not A Great Way To Use Your White Privilege’
US
3
Florida State Football Players Are Refusing To Work Out. It Sounds Like The Head Coach Is In Major Trouble
Editorial
4
Mass. AG: 'America Is Burning. But That's How Forests Grow'
Politics
5
'If Anybody Needs To Be Fact-Checked, It's The Media': Kayleigh McEnany Unloads On Jim Acosta
Media