Newly-confirmed Secretary of the Interior Ryan Zinke rode a horse to his new job in Washington, D.C., Thursday.

A few people took photos of the Montana-native riding a horse through the nation’s capital in a black hat, boots and jeans, accompanied by two National Park Service police officers.

Zinke later tweeted that he was humbled by the warm reception on his first day on the job.

Humbled by the warm welcome at @Interior this morning pic.twitter.com/1zCvKc0CPL

The Senate confirmed Zinke in a 68-31 vote Wednesday, with most Democrats voting in favor of the nominee despite his skeptical position on climate change. Zinke was sworn in Wednesday evening. (RELATED: Senate Confirms Trump’s Interior Secretary Pick) 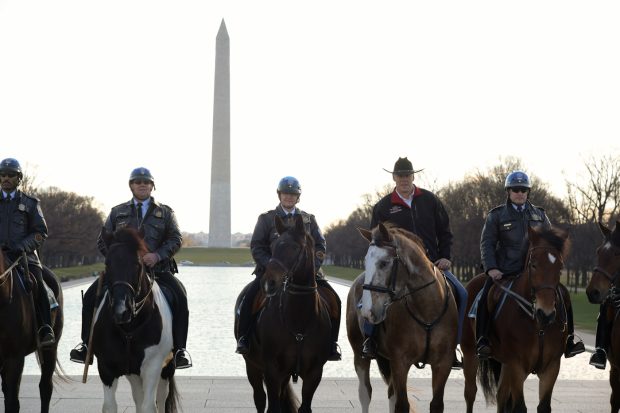 Secretary Zinke with USPP horse mounted unit near the Washington Monument (U.S. Department of the Interior/Flickr)

Zinke, a pro-gun former Navy SEAL, will lead a federal department which oversees around a fifth of the nation’s land.

“I am an unapologetic admirer of Teddy Roosevelt,” Zinke said during a January confirmation hearing with the Senate Committee on Energy and Natural Resources. Zinke mentioned the historically outdoorsy President Roosevelt, a champion of the national parks, ten times during the hearing, the New York Times reported.

“I fully recognize and appreciate there are lands that deserve special recognition and are better managed under the John Muir model of wilderness, where man has a light touch and is an observer.”