The Congressional Budget Office (CBO) unveiled its score of the House GOP’s Obamacare repeal legislation Monday, projecting it would bring down the federal deficit by $337 billion in the first decade with 52 million people going uninsured by 2026.

The savings coming from the American Health Care Act, which was introduced March 6 and already passed two key House committees, largely come from a reduction in the outlays for Medicaid and the elimination of  Obamacare subsidies for nongroup health insurance. 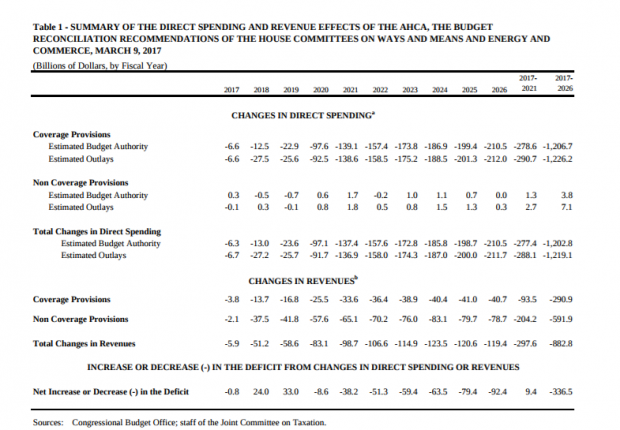 GOP House leadership has repeatedly said their goal is to bring down premiums and make health care more attainable for Americans. Premiums will initially go up by 15 to 20 percent in 2018 and 2019 before they come down, according to the report. The CBO and Joint Committee project the initial uptick would be due to the repeal of the penalties associated with the individual and employer mandates.

“By 2026, average premiums for single policyholders in the nongroup market under the legislation would be roughly 10 percent lower than under current law, CBO and JCT estimate,” the report reads.

While advocates of the legislation said they were aiming to cover as many if not more people than what was seen under the Affordable Care Act, 14 million fewer people would be uninsured by 2018 if the projections are correct. Additional changes to subsidies for plans purchased in the nongroup market and Medicaid program would cause that number to jump to 21 million in 2020 and 24 million in 2026.

“In 2026, an estimated 52 million people would be uninsured, compared with 28 million who would lack insurance that year under current law,” the report says.

The CBO noted the number is high due to the repeal of the mandate, allowing people to opt out of buying a plan, adding it is

“Some of those people would choose not to have insurance because they chose to be covered by insurance under current law only to avoid paying the penalties, and some people would forgo insurance in response to higher premiums,” it said in its findings.

House Speaker Paul Ryan defended the outcome, noting Republican lawmakers are making good on their promise to stop the government from forcing people into buying plans.

“When people have more choices, costs go down. That’s what this report shows. And, as we have long said, there will be a stable transition so that no one has the rug pulled out from under them,” he said in a statement.

The nonpartisan scorekeeper indicated the changes could lead to some destabilization in the individual insurance market, while the nonmarket group would remain stable.

The CBO acknowledged their calculations are not completely full-proof,

“The ways in which federal agencies, states, insurers, employers, individuals, doctors, hospitals, and other affected parties would respond to the changes made by the legislation are all difficult to predict, so the estimates in this report are uncertain,” the report reads. “But CBO and JCT 4 have endeavored to develop estimates that are in the middle of the distribution of potential outcomes.”

While some hesitation remains among members, Ryan applauded the outcome of the report.

“I recognize and appreciate concerns about making sure people have access to coverage. Under Obamacare, we have seen how government-mandated coverage does not equal access to care, and now the law is collapsing,” Ryan continued. “Our plan is not about forcing people to buy expensive, one-size-fits-all coverage. It is about giving people more choices and better access to a plan they want and can afford. When people have more choices, costs go down.”