Donald Trump signed the “Comprehensive Plan For Reorganizing The Executive Branch” from the Oval Office Monday, an executive order meant to reduce waste by reorganizing the federal government. 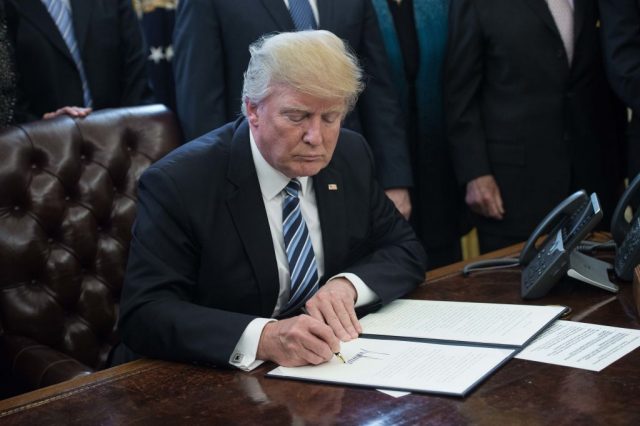 As the president was surrounded by his Cabinet members — with the exception of the four who have not been confirmed — he said this was a “major step towards making the federal government efficient, effective and accountable.”

“We have assembled one of the greatest Cabinets in history and I believe that so strongly,” Trump said as he signed the order, according to the White House press pool. “And we want to empower them to make their agencies as lean and effective as possible and they know how to do it. Today there is duplication and redundancy everywhere. Billions and billions of dollars are being wasted.”

“This order requires a thorough examination of every executive department and agency to see where money is being wasted, how services can be improved and whether programs are truly serving American citizens.”

Trump said the Office of Management and Budget will oversee the evaluation. Then, once the investigation is complete, he will work with Congress to implement the recommendations “on behalf of the American people.”

Press secretary Sean Spicer said at the briefing Monday that there was not a specific number of agencies that the administration hoped to reduce or eliminate.

He said the White House wanted to find out “where money is being wasted” and which agencies were “outdated.”