Rumors of the “Trump Slump” in gun sales have been exaggerated. Recent reports point to three consecutive months of declining NICS background checks (a proxy for gun sales, though not all background checks are connected to a purchase and a single purchase may include multiple firearms) as evidence that President Trump’s election marks the end in a period that saw background checks monthly records broken regularly.

After eight years of an administration led by the “greatest gun salesman in history,” the shift away from an anti-gun agenda has likely eased the drive to buy guns, right?

First, a record-setting number of background checks were completed on Black Friday 2016 – after Trump won the election. 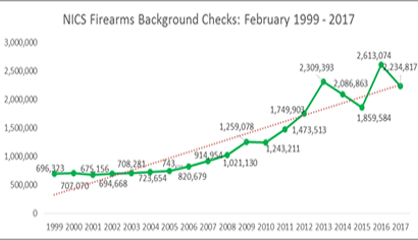 Comparing current data to the record high points doesn’t prove that sales have plummeted; it does indicate that the number of background checks performed – and so the number of permit applications and/or firearms purchases – is still at near-record levels. February 2017, one of the months cited as proof of the “Trump Slump” was actually one of the 15 busiest months ever for background checks.

The narrative doesn’t mention that December 2015 featured the most background checks processed in a single month. Ever.

While “Trump Slump” is a convenient phrase for a headline, it simply does not apply to background checks or gun sales.