“I am not going to defend Donald Trump — not now, not in the future,” Ryan can be heard saying.

The audio, first published by Breitbart News late Monday evening, is from an October 10, 2016 conference call Ryan held with House Republicans. The fact that Ryan told GOP lawmakers in the call — which took place shortly after Trump’s “grab her by the pussy” comments were made public — that he wouldn’t “defend Trump” was widely reported at the time.

But despite not revealing any new substantive information, the tape’s publication — which gives Trump and his supporters the opportunity to actually hear Ryan abandoning him in front of the congressmen he now has to work with — could reopen old wounds between Ryan and Trump.

The bomb-throwing president and establishment Republican have had an oftentimes frigid relationship.

That relationship turned colder in October, when an Access Hollywood tape of Trump making lewd comments about women was leaked to The Washington Post. Ryan disinvited Trump from a planned joint event, and distanced himself from the Republican nominee both in public and in private, as Trump supporters (and likely Trump himself) will now be reminded. 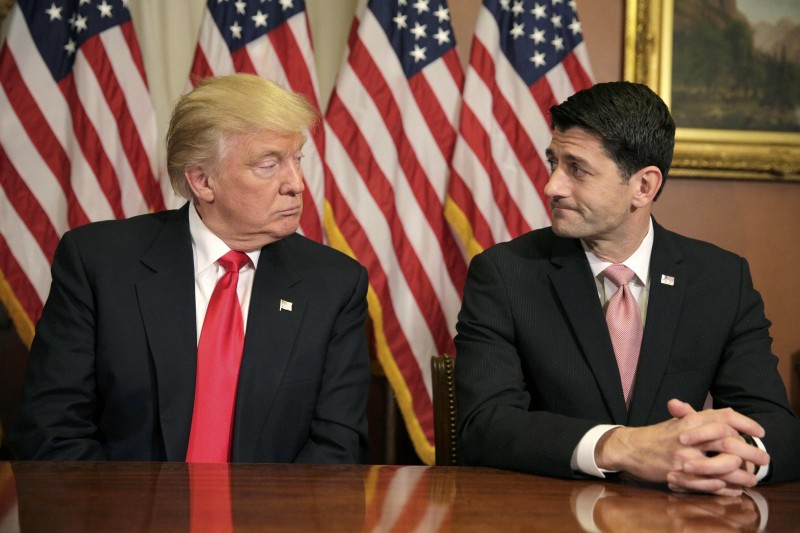 “His comments are not anywhere in keeping with our party’s principles and values,” Ryan can be heard saying on the audio.

“There are basically two things that I want to make really clear, as for myself as your Speaker. I am not going to defend Donald Trump — not now, not in the future. As you probably heard, I disinvited him from my first congressional district GOP event this weekend — a thing I do every year. And I’m not going to be campaigning with him over the next 30 days,” Ryan said.

“Look, you guys know I have real concerns with our nominee. I hope you appreciate that I’m doing what I think is best for you, the members, not what’s best for me. So, I want to do what’s best for our members, and I think this is the right thing to do. I’m going to focus my time on campaigning for House Republicans. I talked to a bunch of you over the last 72 hours and here is basically my takeaway. To everyone on this call, this is going to be a turbulent month. Many of you on this call are facing tough re-elections. Some of you are not,” he continued.

“But the last thing I want to do is to help Hillary Clinton get the presidency, and get Congress. Look, she’s a failed progressive. She’s running an abysmal campaign. I mean, it’s just — it’s amazing how easily she could be beaten,” Ryan added later.

“She will take this country in the wrong direction. And the last thing we need is four more years of Obama policies or two years of a Clinton presidency with a Democrat Congress. Could you imagine what that would look like? So the last thing we want to be doing is giving Hillary Clinton a blank check in Congress.”

“Greg Walden will get more into what that looks like and what polling looks like, but I want to basically close with this: His comments are indefensible, they’re not in keeping with our principles, so I’m not going to try to defend him. I’m going to focus on Congress, I’m going to focus on upholding our values. We have a great, great policy agenda — A Better Way — that we need to take to voters and show what our party actually stands for and what it’s stood for for generations.”

At the time Ryan made the comments, Trump was widely believed to have little to no chance of winning the presidency.

“The world is well aware of this history,” Ryan spokesman Brendan Buck told Breitbart, adding: “And obviously a lot has happened since then. As everyone knows.”

Buck also claimed that Ryan’s comments about not defending Trump were only about the Access Hollywood tape.

Although Ryan and Trump have made an effort to patch up their relationship since Trump’s surprising win in November, the tape’s publication could re-complicate things between the two.

Adding to the chaos is the fact that Steve Bannon, Trump’s chief strategist, was formerly the head of Breitbart. Under Bannon’s leadership, Breitbart consistently attacked Paul Ryan, as the site now seems to be doing once again.