California Gov. Jerry Brown ended the state of emergency drought order for most of the state, signaling an end to the four-year drought some in the media claimed would be “unending” and “probably forever.”

Brown rescinded the state of emergency order Friday, but kept some water conservation measures in place to keep residents from returning to “wasteful” habits, like watering their lawn while it’s raining.

“This drought emergency is over, but the next drought could be around the corner,” Brown said in a statement. “Conservation must remain a way of life.”

The drought, which began in 2012, pushed rain and snowfall levels to their lowest on record. California saw its three warmest years on record (2014, 2015 and 2016) during that time and the Sierra-Cascades mountains saw their lowest snowpack on record, about 5 percent of normal.

Brown blamed global warming for the drought, echoing concerns by some scientists and activists that human activities were warming the planet and driving more extreme weather events.

News outlets amplified those claims in 2016, running with headlines about permanent drought.

To be fair, more than 90 percent of California was mired in varying levels of drought around that time, with more than 55 percent in extreme drought, according to the U.S. Drought Monitor. 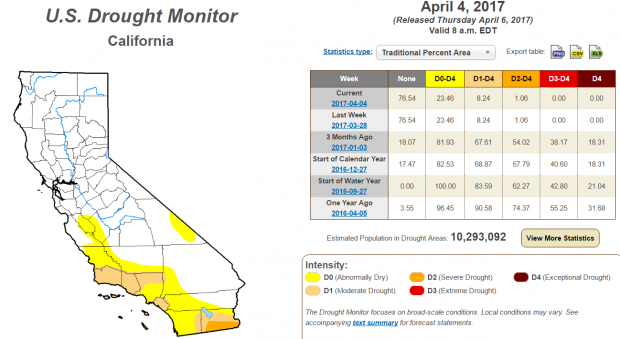 How did the drought end so quickly?

Earlier this year, a series of rain and snow storms struck Northern California over a relatively short period of time.

One weekend of intense storms in January dumped 350 billion gallons of water into California reservoirs. A few more weeks with rain and snow filled eight of 10 major state reservoirs to well above average.

Unfortunately, rainfall in early February brought so much water, the Oroville Dam’s spillway collapsed, which in turn, nearly caused the emergency spillway to break apart. The disaster highlighted the need to upkeep California’s critical water infrastructure.

But it also illustrated that California has a long, well-documented history of droughts, followed by extreme precipitation.

More recently, California went through a major drought in the 1970s and Brown — the very same — imposed emergency measures then as well. Scientists blamed that drought on a “cooling cycle.”

The “Dust Bowl” droughts of the 1930s spurred the construction of more extensive water systems in the state, which helped when the 1947-1950 hit and again during the 1959-1960 drought.