The long wait is over.

Hasan Minhaj, senior correspondent for Comedy Central’s “The Daily Show,” will headline this year’s White House Correspondent’s Dinner that President Trump has said he will not attend.

He’ll be the first president in several years to not attend the scholarship dinner. Trump has made it a priority to be an enemy of the media throughout his campaign and his presidency.

“President Trump has said that he will not be coming,” Mason continued. “But we will still be celebrating the First Amendment and the importance of a free press, and Hasan brings all of that. He brings comedy chops, but he also brings heart, and I think that we are going to see that at this dinner.”

Mason said Trump will get some ribbing.

“He is going to make some jokes, no doubt, about the press and probably about the president, but he is also going to bring the message that we hope to get across that night, and that is that the First Amendment is critical and the work of the White House press corps and press around the world is critical,” he said.

MSNBC’s Willie Geist asked Mason what he was looking for in a headline comedian.

Trump is known for having a penchant for drama and a flair for the unexpected. But Mason said he thinks Trump will not attend the dinner because he said as much and his aides have also signaled they will not attend. But Mason added that he has made it clear that the president is welcome should he want to be at Washington’s infamous Hinckley Hilton in Northwest D.C.

Hasan was born in America in Davis, Calif. He was raised in a Muslim family that originated in India but immigrated to the states.

In one of his first acts as president, Trump tried but failed to institute an immigration ban on citizens from largely Muslim countries. In certain lefty circles the ban was dubbed a “Muslim ban.” So Hasan’s performance should be pretty awkward and funny for guests and organizers alike. 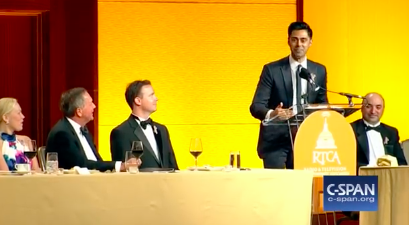 In a video, Hasan makes fun of Sen. Sheldon Whitehouse’s (D-Rhode Island) surname. He quips, “That’s like my name being Hasan Head of Homeland Security. That would never happen.”

Online reports indicate that there is no familial relation between Hasan Minhaj and Nicki Minaj.