Facebook said no dice to the San Diego YouTuber after he declared that the transgender mom in a new Baby Dove soap commercial made him “want to puke.” The social media medium said Dice’s remarks violated their “community standards.” They shut him down for 24 hours.

In the ad, the baby’s mother is a woman who was previously a man. 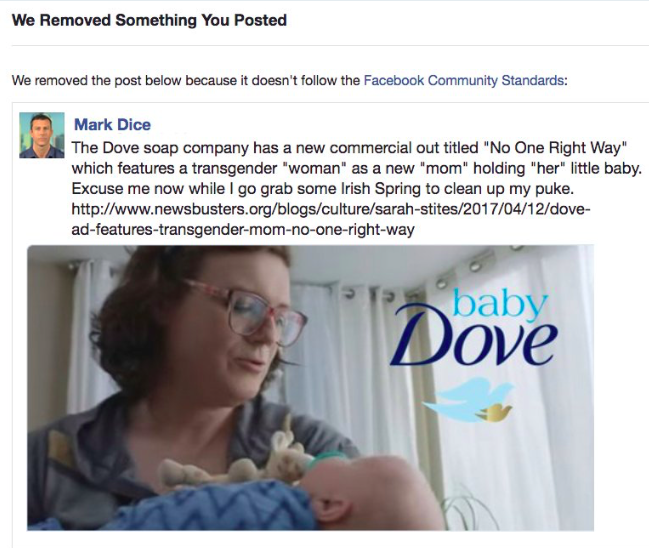 After Breitbart News covered the incident on Saturday, Facebook reinstated Dice’s account and apologized. Dice then doubled down about how offended he is that Facebook tried to squash his First Amendment rights.

“This is the latest instance of Orwellian censorship of conservatives,” Dice told The Mirror over Twitter DM. “Even more troubling is that it was kind of a joke. I mean, Irish Spring is a competitor’s soap, and I just said I was going to need it to clean up my puke due to the Dove commercial making me ill (which I do find sickening).”

But Dice said it’s a joke.

“The fact that one of their moderators decided my post violated their terms of service in the first place is very troubling,” he told me. “Not only did Facebook delete the post, but they locked me out for 24 hours so I couldn’t post anything else.”

Dice added sarcastically, “I’m sure it had nothing to do with censoring conservatives. Nothing to do with me voicing my disgust about the father who ‘identifies’ as a baby’s mother featured in the new Dove soap commercial. No. Just an accident. haha.”

“YouTube demonitized the video almost immediately as well for ‘not being advertiser friendly,'” he told The Mirror, explaining that no ads could run on his video and he couldn’t earn any money from it.

But Dice saves the bulk of his ire for Facebook.

He even threatened to sue.

“I see this as more political persecution of conservatives by Facebook, which not long ago was accused of manipulating the trending topics section and preventing certain conservative websites from making the list,” he said. “If they ever shut down my page permanently for alleged ‘terms of service violations’ I will sue them for discrimination.”

Dice falls into a dangerously similar category as Milo Yiannopoulos, who was thrown off Twitter in 2016 after he told SNL’s Leslie Jones that he didn’t like her appearance in a movie. He also said she looked like a man, after which Milo disciples began hurling racist comments at her.

“Twitter’s liberal bias is clear as day,” he told me. “Accounts threatening to assassinate the President mostly go unpunished, but Milo got suspended for teasing a celebrity. It’s obvious what their agenda is.”