Vice President Mike Pence issued a stark warning to North Korea by reminding the country that the United States bombed both Syria and Afghanistan this month. 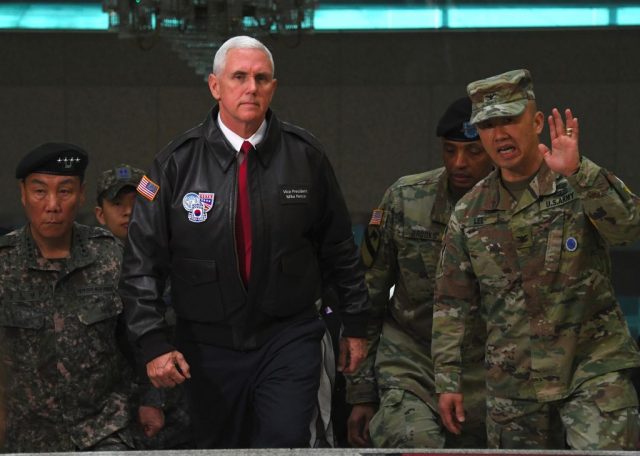 “Just in the past two weeks, the world witnessed the strength and resolve of our new president in actions taken in Syria and Afghanistan,” Pence said in a statement alongside South Korea’s acting president Hwang Kyo-ahn Monday.

“North Korea would do well not to test his resolve — or the strength of the armed forces of the United States in this region.”

Earlier during his trip, Pence said he hopes the issue can be resolved peaceably.

“We’re going to abandon the failed policy of strategic patience. But we’re going to redouble our efforts to bring diplomatic and economic pressure to bear on North Korea. Our hope is that we can resolve this issue peaceably.” 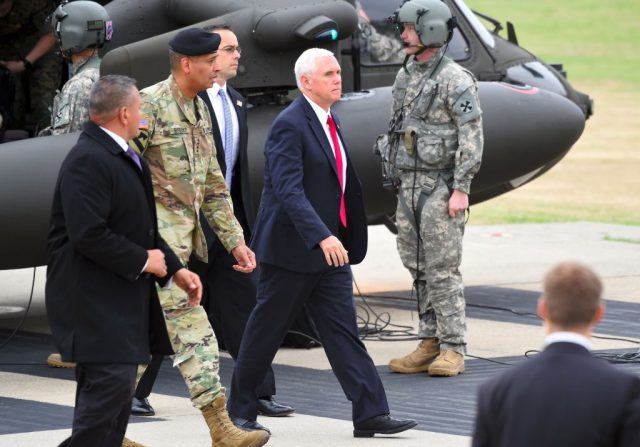 Pence arrived in South Korea just hours after a North Korean ballistic missile “blew up almost immediately” upon launch, the U.S. Pacific Command said. North Korea held a parade the day before the launch in an attempt to show off new missiles designed to reach the United States.

“The president and his military team are aware of North Korea’s most recent unsuccessful missile launch,” Secretary of Defense Jim Mattis said in a statement. “The president has no further comment.”

In early April, the military launched 59 cruise missiles at a Syrian military airfield after a chemical attack in the country left at least 80 people dead. Then this week the U.S. military dropped the “mother of all bombs” — the biggest non-nuclear weapon — on an ISIS cave complex in Afghanistan. (RELATED: Trump Comments On Dropping Largest Non-Nuclear Bomb In Afghanistan)