This week’s married high school drama teacher busted for allegedly traumatizing a 15-year-old male student with a candle-lit romp behind a costume rack and another romp on a classroom couch is Jennifer Frechette.

Police in New Haven arrested Frechette late last week after she turned herself in on a warrant.

Two school security guards say they discovered Frechette and the teen together in a quick-and-dirty bed located behind a costume rack back on Jan. 5. The guards felt compelled to investigate because of some noises emanating from behind the costume rack.

“Also in the room on the floor were battery operated ‘tea light’ candles, a mat that was made to look like a bed with pillows, a quilt, and a ‘Beats’ headphone case that contained several unused condoms,” says a police affidavit obtained by Hartford CBS affiliate WFSB.

Here, for the record, is an example of what battery-operated “tea light” candles look like: 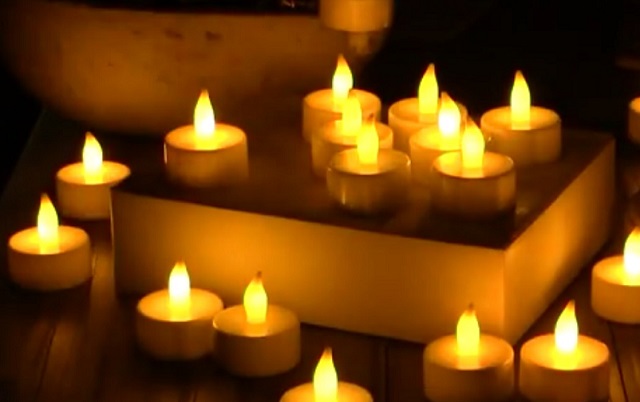 Frechette and the student were fully clothed when the security guards found them, the affidavit explains.

The teen quickly stood up and ducked out of the difficult situation.

Frechette stayed on the mat. She was “in a fetal position,” according to the police affidavit.

The guards said the drama teacher offered several explanations for how she ended up on the mat with the student — and also with the candles and the batch of condoms.

She said the student “sweet talked,” according to court documents. She also said “nothing happened,” “what was I thinking” and “I’m going to lose my job.” court documents say.

Later, police say, Frechette suggested that she and the student were simply trying out costumes for a theater production. That mat on the floor? It was just there for comfort.

When investigators interviewed the student in March, he first denied everything. Then, they say, he broke down and claimed that Frechette had traumatized him with an unspecified sexual act in December — on a couch in a school classroom.

According to the affidavit, the student also told police that he and Frechette had planned to have sex on the evening the security guards busted them behind the costume rack.

A 2013 article in the New Haven Independent describes Frechette as an experienced actor and dancer who began her teaching career as a volunteer manager of school plays.

The story also notes that Frechette’s husband is an architect.

Tara Knight, an attorney representing the family of the 15-year-old student, called the allegations against Frechette “the ultimate exploitation and the ultimate insult and offense to a mom and dad,” according to WTNH.

“I’m shocked,” Houston added. “I know she was involved with the drama club over there.”

“The care and safety of students is the top priority for New Haven Public Schools,” Mayo said in a statement obtained by WTNH. “My heart goes out to the victim in this case and we will continue to offer any and all support that we can. While we respect the due process afforded to the teacher in both the criminal and employment aspects we will continue to cooperate with authorities as this matter moves to the prosecution phase.”

The high school has made counselors available to provide therapy for students who did not participate in sexual activity but who could experience trauma after learning about it.