The professor who tweeted “Trump must hang” and that two Republicans should be executed for each immigrant deported is taking a paid leave of absence for the rest of the spring semester.

Professor Lars Maischak of California State University, Fresno agreed upon the leave of absence with the university, according to The Fresno Bee.

The professor’s paid leave of absence comes after The Daily Caller News Foundation reported on threatening tweets sent from his Twitter account (since deleted), including the following: 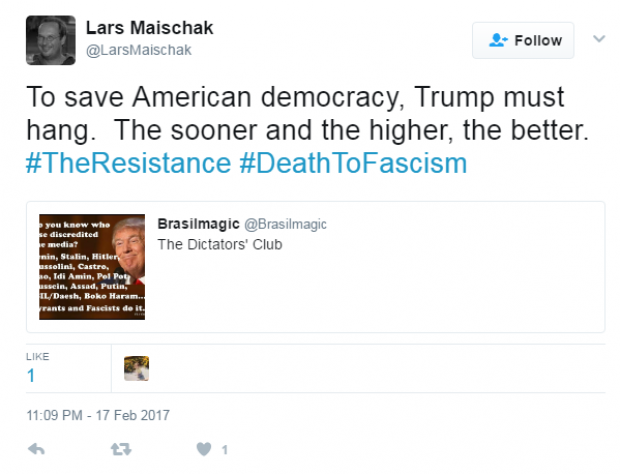 Maischak’s five American history courses will be taught by a substitute teacher. Fresno State Provost Lynnette Zelezny told The Fresno Bee that 213 students will be impacted.

“The agreement for the paid leave was reached in accordance with provisions in the collective bargaining agreement with the California Faculty Association, the union that represents all faculty,” said Joseph Castro, Fresno State’s president, in a statement obtained by The Fresno Bee. “During his leave of absence, Dr. Maischak will no longer have a teaching role, but will be conducting research off campus.”

After initially defending his tweets, Fresno State launched an investigation into the incident and Professor Maischak apologized. A petition on Change.org calls for the professor to be fired.

“While Maischak is certainly entitled to his opinion, he should not be in a position of power and authority over impressionable young minds while inciting violence against the president and those who support him,” reads the petition.

Maischak has left town after the unearthing of his tweets and says he does not feel safe, as reported by The Los Angeles Times.