Former Tomah VA director Mario DeSanctis, who was fired from the facility in the wake of the opioid over-prescription scandal, has been looking hard for a health care executive job over the last month.

In a series of posts made on his now-deleted LinkedIn profile, DeSanctis stated that he is “Looking for Healthcare Executive Management Opportunities,” two years after being unceremoniously fired from the Tomah VA from his position as facility director. 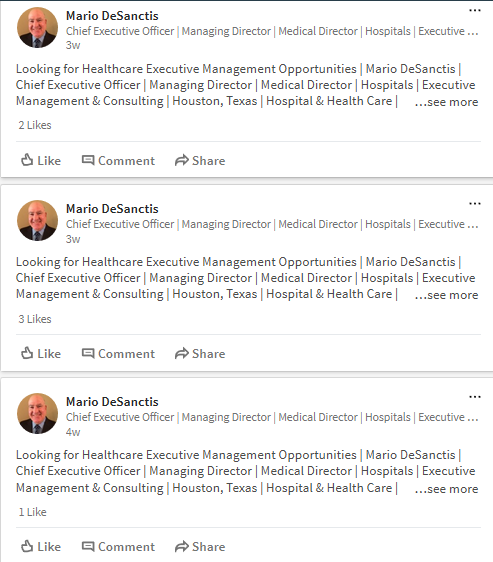 In his profile, DeSanctis noted that he has “extensive domestic and international healthcare leadership” and referred to himself as a “visionary leader” with a “record of improving organizational performance and attaining excellence in healthcare compliance by implementing stringent standards and equipping people to achieve success. Consistently attained outstanding results in Joint Commission reviews.”

What DeSanctis did not note in his biography, however, is that he was first removed in March 2015 from his position as facility director and “temporarily reassigned to a position at the Great Lakes Health Care System network office, a position outside the Medical Center.” Additionally, the pressure on the Department of Veterans Affairs was so intense that the agency got rid of him altogether in September that same year, an unusually grave move, given that the VA has in the past gone to great lengths to shield its executives.

In the press release, the VA did not say whether DeSanctis was fired or had quit on his own volition, but Democratic Rep. Ron Kind told the La Crosse Tribune that he was given word that DeSanctis had been “let go.”

DeSanctis had originally become facility director of Tomah in 2012. He presided over the facility at the same time that the infamous chief of staff Dr. David Houlihan, known to veterans as the “Candy Man” distributed incredibly large amounts of opioids to patients.

In one case, which has put the Tomah VA on the map, Marine veteran Jason Simcacoski died on August 30, 2014, from a lethal cocktail of prescription drugs, which the inspector general later confirmed.

The Center for Investigative Reporting noted in February 2015 that DeSanctis had been given a $8,025 bonus on top of his existing $160,000 salary, despite the fact that overprescription of narcotics was endemic at the facility and pharmacist whistleblowers who raised concerns were either fired or quit.

Still, DeSanctis told The Center For Investigative Reporting he believed he earned that bonus.

“I feel that it was warranted and justified,” DeSanctis said.

Employees at the facility, however, did not believe DeSanctis earned the bonus and instead thought he lived in a fantasy land.

DeSanctis did not respond to a request for comment from The Daily Caller News Foundation about his recent job search.

After receiving the request for comment, DeSanctis deleted his LinkedIn profile.