Morgan, the ex-CNNer who serves as Twitter’s human punching bag, has been trash talking Kim Kardashian‘s body, specifically the bikini pictures that recently surfaced of the eldest Kardashian daughter featuring her big, cottage cheese derriere on a beach in Mexico.

No matter that Kardashian has spent her career flaunting her large posterior or that her fame began with a sex tape.

On the subject of Kardashian’s cellulite, Marie Claire says “BFD — everyone has cellulite.” The mag wrote in a story published Wednesday that Morgan “seemingly loves nothing more than trolling women about their bodies.”

While hosting Good Morning Britain this week, Morgan bristled when his co-host said female cellulite should be celebrated.

“Why would we celebrate it? We put up with it, tolerate it, but not accept it,” Morgan said. “Flaws should not be celebrated. My thoughts are, she’s just launched her new emoji of her backside next to an ashtray—which she’s called it ‘ass tray’—so I think her posterior is fair game.”

TMZ didn’t hold back on the topic. On Monday, Harvey Levin‘s site posted the photographs and slammed her, saying, “Just a healthy reminder that summer is coming.” Meanwhile, they said, Kim’s sister Kourtney, “flashed some serious underboob.”

On Tuesday, the site completely walked back its original comments from 24 hours earlier and ran an “EXCLUSIVE” to once again address Kim’s bum. Except his time they said how “sensational” she looked in Mexico. They pointedly addressed her butt, saying it looks “awesome.”

Morgan, who has often been called out for his insensitivity, isn’t taking his beating lying down. He critiqued Marie Claire for operating under a double standard. 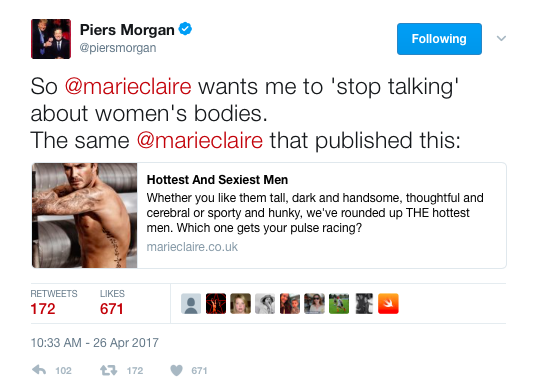 In its scathing post, Marie Claire painted Morgan as a pig of a man. The mag told him to shut up forever about the female physique.

In his native tongue — the king’s English — he called them “wastrels,” a word that means: “waif, neglected child and a wasteful, good for nothing person.” 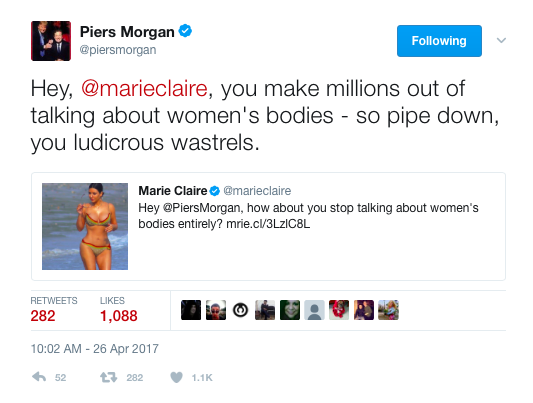 Morgan also got cheeky and posted this: 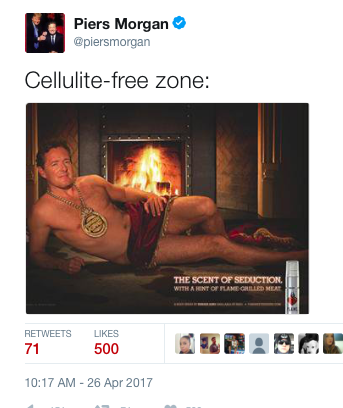 In June, 2016, Marie Claire published a story about Kardashian’s 1800-calorie diet. The piece reported that Kardashian is an Atkins diet ambassador and used it to drop her baby poundage.

It’s fair to say that the mag hasn’t steered clear of Kardashian’s butt — or, as they put it, her “curves.”

But compared to Morgan and TMZ, they have been kinder about it.